Meaning of the Sabbath Day. God Rested & We Rest. That’s It? 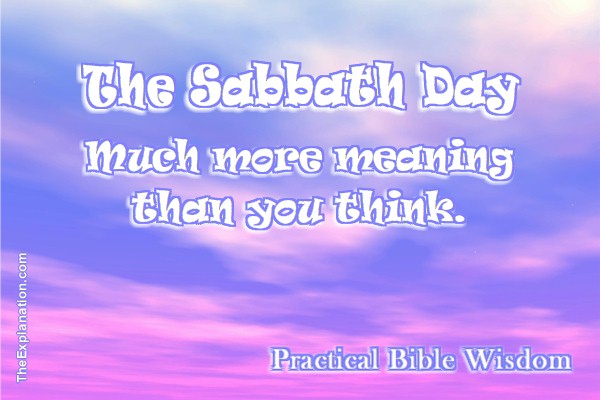 Of the Ten Commandments, which is the longest? The strangest? The least understood? The only one modified in Deuteronomy? The Sabbath day.

The Sabbath day has much more meaning than you think. Rest is only a part of its significance.

Last week we addressed evidence for God and I said The Explanation will give you some deep insight into the mysteries (Luke 8:10) of His Masterplan for humankind to enhance evidence for God. The Sabbath day is one of those mysteries the Lord of the Sabbath (Mark 2:27), Jesus Christ, explained, as recorded in all four Gospels.

God inaugurated The Sabbath day, the seventh day of the week, at Creation. Genesis…

3 And God blessed the seventh day, and sanctified it: because that in it he had rested (H7673) from all his work which God created and made.

4 These are the generations of the heavens and of the earth when they were created, in the day that the LORD God made the earth and the heavens,

For a detailed explanation of these verses, read this post. Use the Bible tools at UnlockBibleMeaning.com to verify the Biblical Hebrew meaning of Sabbath. This is an important context for a number of reasons that I can only summarize here, read this detailed explanation. God ceased the physical Creation and on the Sabbath, the seventh day (not the sixth or the first), He worked with His special creation, humans to make them, to teach them how to lead their lives.

This is the meaning of “he had rested from all his work which God created and made.” A better translation, as the above article explains, “he rested WITH all his work (the humans) which God created TO MAKE.” Whereas ALL the rest of the creation was finished, humankind was physically finished but NOT spiritually. The meaning of the word Sabbath reveals what the Sabbath day is for, what God did on that day with Adam and Eve.

I need you to note that Genesis 2:4 is the first time in the Bible the term Lord God (Yahveh Elohim) is used. This refers to the entire seven-day Creation week, in particular the Lord’s relation to the seventh day and what He did with the humans on that original Sabbath day.

Most people associate one word with the Sabbath day, rest, which is the translation in Gen. 2:3. But elsewhere H7673 translates many other ways. Space lacks for an in-depth development of this subject which I will do at a latter date. For now, retain a second meaning of Sabbath day, cease, corresponding to verse 2, on the seventh day God ended His work. Ended is a different Hebrew word (H3615) also translated cease in Isaiah 10:25.

There’s an important third event that God did on the Sabbath day that is overlooked. Here it is.

16 Wherefore the children of Israel shall keep the sabbath, to observe the sabbath throughout their generations, for a perpetual covenant.

17 It is a sign between me and the children of Israel for ever: for in six days the LORD made heaven and earth, and on the seventh day he rested (H7673), and was refreshed (H5314).

The Sabbath day is a day of rest. Some people think this means doing nothing. To the contrary, it is a day of directed activity with a specific goal, to refresh individuals and the community. We use the term refreshments when we take a break from any activity, it generally refers to a drink or snack to renew our physical strength. In the context of God and the fourth Commandment, it’s referring more to our spiritual strength as we’ll see.

נָפַשׁ knavish naw-fash’; a primitive root; to breathe; passively, to be breathed upon , i.e. (figuratively) refreshed (as if by a current of air):

On the Sabbath day, God rested and was refreshed. When you read the Hebrew for refreshed (H5315) you might’ve been struck by this word because you’ve heard it before. Indeed, it’s the famous word nefesh for soul in Gen. 2:7 “And he (the first man) became a living soul.” Again, this is a mystery to most Bible readers which you can read about here. Suffice to say, it comes from H3514, breathing in the sense of refreshing. You might remember that God breathed in the nostrils of His dust man to refresh him, give him life.

Here’s how this applies to the original Sabbath when the Lord God was with the first two humans in the Garden of Eden viewing the two Trees.

The Sabbath day was inaugurated at Creation by the Lord God for humans.The Sabbath day was later codified as the fourth of the Ten Commandments. Are these commandments only for the Israelites or for all peoples everywhere? Again, a controversial subject where much could be said. Let’s cut the Ghordain knot and go to the crux of the matter.

11 For in six days the LORD made heaven and earth, the sea, and all that in them is, and rested the seventh day: wherefore the LORD blessed the sabbath day, and hallowed it.

Second edition in the last book of Moses:

13 Six days you shall labour, and do all your work:

15 And remember that you were a servant in the land of Egypt, and that the LORD thy God brought you out thence through a mighty hand and by a stretched out arm: therefore the LORD thy God commanded you to keep the sabbath day.

This is the only modified command because God associates the Sabbath day with Creation and going from slavery to freedom. Very briefly, here’s the point,

The Sabbath day is an amazing summary of the entirety of God’s plan for humankind.

Lord of the Sabbath & Sabbath made for man

Now we can understand two related statements, both by Christ, recorded side-by-side in the book of Mark.

23 And it came to pass, that he went through the corn fields on the sabbath day; and his disciples began, as they went, to pluck the ears of corn.

24 And the Pharisees said to him (Christ), Behold, why do they on the sabbath day that which is not lawful

25 And he said to them, Have you never read what David did, when he had need, and was an hungred, he, and they that were with him?

26 How he went into the house of God in the days of Abiathar the high priest, and did eat the shewbread, which is not lawful to eat but for the priests, and gave also to them which were with him?

27 And he said unto them, The sabbath was made for man, and not man for the sabbath:

28 Therefore the Son of man is Lord also of the sabbath.

3:1 And he entered again into the synagogue; and there was a man there which had a withered hand.

2 And they watched him, whether he would heal him on the sabbath day; that they might accuse him.

3 And he said to the man which had the withered hand, Stand forth.

4 And he said to them, Is it lawful to do good on the sabbath days, or to do evil? to save life, or to kill? But they held their peace.

5 And when he had looked round about on them with anger, being grieved for the hardness of their hearts, he said to the man, Stretch forth your hand. And he stretched it out: and his hand was restored whole as the other.

These two examples illustrate how the Sabbath serves the welfare of all humans (the sabbath was made for man). How Christ, our Lord, decides what the use of the Sabbath is for (the Son of man is Lord of the Sabbath).

The entire process of ceasing, refreshing, resting is the pathway for coming out of slavery to sin (Deut. 5) and becoming a new spiritual creation (Ex. 20). This next passage can be a little enigmatic, but with the principles developed in this post you should understand the meaning.

5 Or have ye not read in the law, how that on the sabbath days the priests in the temple profane the sabbath, and are blameless?

6 But I say to you, That in this place is one greater than the temple.

7 But if you had known what this means, I will have mercy, and not sacrifice, you would not have condemned the guiltless.

8 For the Son of man is Lord even of the sabbath day.

Priests and present-day pastors in God’s Church work on the Sabbath. They work to make the people of God as the Lord God did in Genesis 2:3 with the first humans. They do not profane the Sabbath in God’s Church, the Church of which the Lord Jesus Christ is the Foundation, Cornerstone and Builder. He’s greater than the Church, as He is to the temple, and His desire is that we cease and refresh ourselves in God’s mercy to be at rest with ourselves and with Him.

All the Gospels refer to Christ’s activity on the Sabbath, Luke 6:2-10, John 7:19-23, etc. and whether it’s His instruction or actions, they always include the principles of ceasing, refreshing, and resting. When we understand the deep meaning of the Sabbath day, encompassed by these three principles, then we will see the significance of the Sabbath day in many other verses. For instance.

And be not conformed to this world: but be you transformed by the renewing of your mind, that you may prove what is that good, and acceptable, and perfect, will of God.

Next week will be the final post in this series of practical Bible wisdom around another mystery of God, His festivals.

Since you read all the way to here… you liked it. Please use the Social Network links just below to share this information from The Explanation, Meaning of the Sabbath Day. God Rested & We Rest. That’s It?