Nimrod’s Devarim – His Cause in Opposition to God 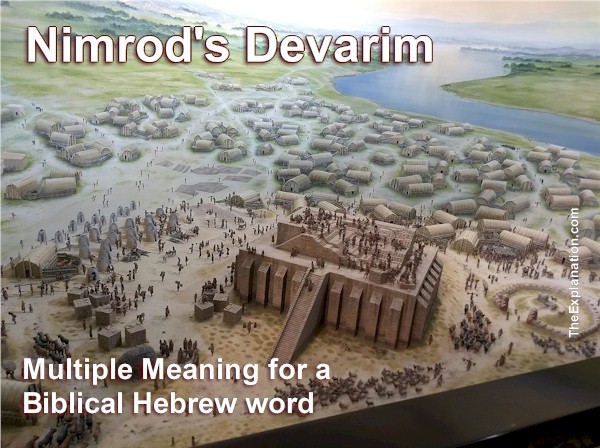 Nimrod’s devarim—Nimrod’s causes. One cause composed of multiple decrees.

Nimrod’s devarim. What are they?

We discussed the Ten Commandments in the last lesson. Commandment is the Biblical Hebrew word dabar. Let’s look at the first verse where the Bible uses dabar.

The whole earth was of one language, and of one speech. When we read this passage in English, see the word speech (davar) as a synonym of language (saphah) and tend to quickly move on from there. These words are not synonyms, by any means. Dabar relates to the first major worldwide political event in history. Space does not permit us to expand, but it is the establishment of the first Empire by a leader named Nimrod (Genesis 10:9-10). What does dabar mean in this context? And how does it relate to the Ten Commandments?

Go over to UnlockBibleMeaning.com and switch to the Interlinear Bible or Strong’s Concordance view. You see that there are two completely different numbers and words for language (H8193) and speech (H1697). Compare the Hebrew letters to note this vivid divergence.

Other translations of H1697 – dabar implicate a matter (as spoken of) or thing; adverbially a cause. They include affair and business. It’s not a matter of picking and choosing whatever you want. You should understand the context. Who Nimrod is, and what Nimrod is accomplishing. Only then can you really know how to understand Nimrod’s devarim.

Nimrod was a tyrant who unified the world against God. He’s an important figure at this juncture in the Bible narrative. Nimrod’s devarim, his cause is significant as we shall see in a future book of The Explanation series.

This is a course to master the keys of Biblical Hebrew to unlock Bible meaning. I will go deeper into the details of Nimrod’s rebellion against God and how he enticed and swayed his followers to follow his cause. Yes, at the time of the Tower of Babel, they all spoke one language, that Tower was the focal point of their cause and indeed their worship. Suffice to say, the concept of one cause reveals much more than one speech.

If you checked the Interlinear Bible, you’ll have noticed something quite particular. The Biblical Hebrew states, “devarim echadim,” difficult to translate, because both words speech and one are in the plural. The word one is an adjective, so it has to agree in gender and number with the plural noun devarim, hence it’s plural but still translated one or unique. Consider this, when you compare Nimrod’s devarim, his causes (dabarim plural) to God’s causes, His Ten Commandments (dabarim plural) you can grasp the opposition in direction that these causes can take humankind.

I realize that the Ten Commandments only came later, but we know God forbade murder (God punished Cain for this). God forbade other gods before Him and stealing (Adam and Eve did this). So, God’s causes or commandments were existent at that time. God had His commandments and Nimrod has his opposing commandments.

We don’t want to get into grammar, but for the grammar buffs, keep in mind, that one (echad) can be plural in Biblical Hebrew. Look at the Hebrew for one language, saphah echat. Language is a feminine noun, hence the feminine form of one ending with a taf in achat while the masculine form takes a daled in echad and the plural adds the plural im in echadim. In Hebrew, the text writes ONE in the plural. We find that strange. Hebrew is Hebrew with its various meanings for one word. That’s Key 1 to master Biblical Hebrew. Nimrod’s devarim is ONE cause with many aspects.

The translation one speech in the singular occults the entire comprehension of this context. In English, we totally lose the plurality. The French Segond Bible version renders the plurality, les memes mots – the same words. In both cases, the translations give only partial understanding. Poking into the Biblical Hebrew throws open a whole new vista of this important first usage of davar and Nimrod’s devarim. It was the first united nations with no translators, one language and one body, or code, of laws (devarim) in opposition to God’s laws (devarim).

Since you read all the way to here… you liked it. Please use the Social Network links just below to share this information from The Explanation, Nimrod’s Devarim – His Cause in Opposition to God