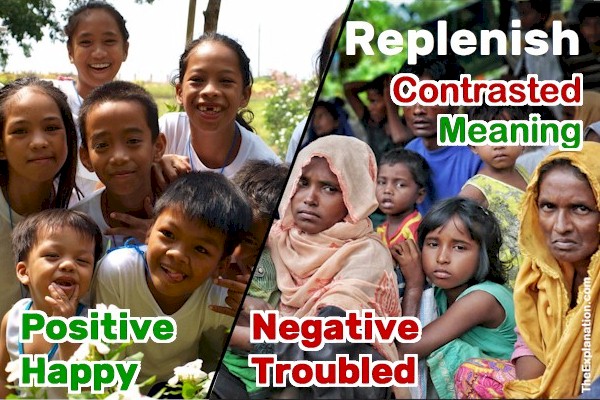 Replenish the Earth. Fill it with humankind. We’re almost 8 billion. But the Biblical Hebrew also has a negative connotation.

Replenish the Earth. Contrasted meaning. Fill it positively or negatively. Happy or troubled.

We’re focusing on the first chapters in Genesis in this course because The Explanation series of books comments at length on all these verses. It’s the first five minutes of the Bible story and by reading them you can see more closely the contrasting nature of these Hebrew words. Staying in Gen. 1:28, let’s note another such word, replenish. Again, reading it in English, we only think of filling the glass. Naturally, the dictionaries only give the positive.

And God blessed them, and God said to them, Be fruitful, and multiply, and replenish (H4930) the earth…

You know the exercise now.

Here’s the Biblical Hebrew for replenish.

מָלֵא mâlêʼ maw-lay’; or מָלָא; (Esther 7:5), a primitive root; to fill or (intransitively) be full of, in a wide application (literally and figuratively):

Note that Strong does not talk about positive and negative, no mention of contradictory meanings as he did with subdue which we saw in the last lesson. Even looking at the list of KJV translations,  does not reveal the opposing meanings of replenish. However, your Bible Study can and should be conclusive about Key 2 we’re discussing here. The same Biblical Hebrew word can have opposing meanings.

Here are some examples of the negative side of replenish. Notice particularly, Jeremiah 25:34, there’s nothing but negativity in this verse and context.

Genesis 6:13
And God said to Noah, The end of all flesh is come before me; for the earth is filled (H4390) with violence through them; and, behold, I will destroy them with the earth.

Leviticus 9:17 And he brought the meat offering, and took (H4390) an handful thereof, and burnt it upon the altar, beside the burnt sacrifice of the morning.

2 Samuel 23:7 But the man that shall touch them must be fenced (H4390) with iron and the staff of a spear; and they shall be utterly burned with fire in the same place.

Isaiah 40:2 Speak you comfortably to Jerusalem, and cry to her, that her warfare is accomplished (H4390), that her iniquity is pardoned…

Jeremiah 25:34 Howl, you shepherds, and cry; and wallow yourselves in the ashes, you principal of the flock: for the days of your slaughter and of your dispersions are accomplished (H4390); and you shall fall like a pleasant vessel.

Jeremiah 51:11 … gather (H4390) the shields the LORD has raised up the spirit of the kings of the Medes: for his device is against Babylon, to destroy it…

See how this word replenish is used in various contexts with multiple meanings, confirming Key 1 and also with contrary meanings revealing Key 2. For instance, take a handful (Lev. 9:17), meaning taking a small portion. It’s used as satisfy (Pro. 6:30), in the sense of positive nourishment, but also as filled, gather, or accomplish in the sense of violence, war, and death. Hence the feature image above depicting positive happiness and negative trouble.

In summary, God inspired two words (there are others in this context), subdue and replenish. They represent governance and relationships. God’s implication is to practice these traits positively. The deeper meaning revealed by the Biblical Hebrew shows there’s room for negative application.

Regarding contradictory meanings, from a human perspective, our proclivity is being two-faced. These two words represent humanity’s doubled-sided, split approach to social relations and government at all levels, from personal to international. We can say all of our dilemmas of the 21st century fall into these two categories. We subdue and replenish INcorrectly, at least INcompletely. The words reflect our contradictory nature perfectly.

This course is not the place to get into it. But, isn’t it amazing that in these two key areas of human existence, we have no explicit instruction of a path to follow? Nobody has a clear vision of government and relationships and what and why they exist. Who knows, practices, and teaches the right form of governance and social relations for peace and prosperity? The very things people around the world crave, world leadership is incapable of providing. That’s the paradox of the 21st century.

The second key to master Biblical Hebrew, contradictory meanings, majestically illustrates this paradox. The opposition of meaning of the SAME word incorporates the clash of governance and relationships, the contrasting positions of those who think, “I’m right.”

Replenish and subdue convey the dual reality that humankind can both enhance and ruin relationships and the environment. Individually and collectively we can properly use or abuse that which we have control over. It can go positively or negatively. It can go from positive to negative and from negative to positive. We can change direction anytime we want. These are the continual choices each of us and society make.

This is not the place to develop the free choice and the ability and plasticity humans have of changing their minds to follow a better or worse path, contrasting meanings. These are major subjects that the Bible answers and which The Explanation develops in the Genesis Commentary Series.

One more lesson for Key 2, and then there’s a surprise waiting for you. So, let’s get on with it, you’re going to enjoy the gift.

Since you read all the way to here… you liked it. Please use the Social Network links just below to share this information from The Explanation, Replenish. Filling Up. Now, Discover the Alarming Contrary