7 Realms of Existence. How Can You Explain the Invisible? 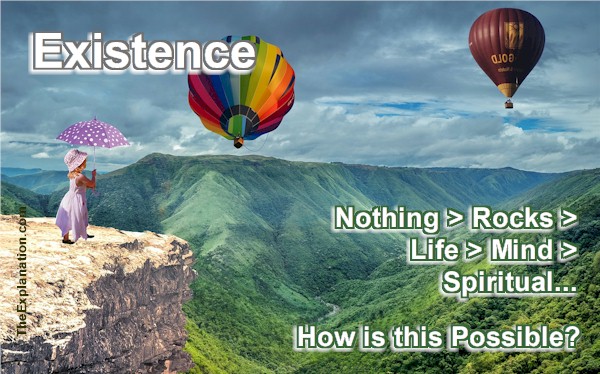 Existence. From nothing to mineral rocks to life to mind and the spiritual. How is this trajectory possible?

This is the preface to a new book that will be out later this year. The temporary title is The Body-Mind Problem… Solved. It will give the solution to the 430-year-old Descartes dilemma, regarding the relationship of the human body to consciousness and mind. Because we are those human beings with body and mind, the question involves us directly.

However, this subject is part of a much larger conundrum; existence itself. Why do we exist? In what form do we exist? When did existence start? How did we, and the universe, come into existence? Is there something beyond existence? And the questions go on.

Science, philosophy, and religion poke around at these questions. They do give some answers, but they are inconsistent. There’s no unity within each field and, more than often, there’s no communication between fields. Existence is a non-verbal, no-man’s-land, strewn with mines that few venture into, for fear of being blown apart by the opposition.

The Explanation will take you on an amazing eye-opening adventure into virgin territory and reveal what visible and visible, body and mind, material and spiritual are. That’s the story of existence.

Science, Philosophy, particularly from the Orient, Religion, and I must add people’s personal experiences are at loggerheads. There are so many theories about existence out there, it’s a Babylon of confusion. And the worst of it is no-one gives you the full story of the real problem as a whole. The existence of body and mind are only two of seven levels of the spectrum of existence.

Here are the 7 Realms of Existence with some general commentary to help clarify them in your mind. You might not agree with these groups or the lines drawn between each group. I understand, all I ask is your patience, down the line, you’ll understand why these groupings are such.

This is the first major roadblock. Impossible to prove it one way or another. Whether there’s always been something, and if so, where did that something come from? Or did something came from nothing?

Here’s an article, The Universe has never truly been empty, reflecting on empty space, which is an illusion. There will always be quantum fields. The article broaches this tantalizing subject. I’ll just add that even if only quantum fields were in existence, they are one of the most complex phenomena you can imagine. So, where did something come from?

From something, we need the basic blocks to build the material world, known as matter, from quanta, electrons, protons, atoms, molecules to rocks, planets and the universe. We’ve basically got the answer to this question. I described how the universe and physical world came into existence in the book Inventory of the Universe, which you can read online. This is the study of geochemistry and geology.

From a human point of view, this is possibly the most interesting. How did dead matter become living matter? This is the transition from geochemistry to biochemistry. In technical terms called Abiogenesis.

As the Scientist and author, Ethan Siegel wrote, “does life emerge, causally. It’s possible, but the jury is not only still out, they likely won’t be back for a long time. This is an incredibly difficult hypothesis to test, and we very likely won’t believe we have the answer until we’ve achieved the holy grail of abiogenesis: creating life from non-life for ourselves! So we still don’t know why or how life exists.”

From this point on we’re into the invisible, intangible world of the abstract,

How do bacteria and viruses live and especially adapt to new environments? How do they know to pass on part of their genetic makeup to develop resistance? They don’t have a brain, or do they? This is the intrinsic nature of things. There’s no physical reason why such practices should take place. How and why did it start? Is there some type of instinct at work? Or something even more fundamental?

Insects of all nature, animals, birds, fish with the need to migrate, their mating and communication. All these abstract, but vital aspects of life are part of this conundrum. We simply don’t know how living things developed their own specific innate sense of life.

And then we come to us humans. Our human nature, psyche, conscience, and soul. This is the Descartes dilemma. We know, as humans, we possess consciousness and mind, even if some question even that fact. But even with the incredible progress in science and technology, we are hard-pressed to come up with a real definition of what this dynamic motor of thought really is.

It’s the last frontier. Can the human mind analyze the human mind? Can we come to a definitive conclusion as to what mind really is? Until now, the answer has been no.

Now we move into an even stranger world, the spiritual. As much as there’s a debate among scientist as to the nature of mind, whether is material or immaterial, the spiritual is on the metaphysical scene, shrouded in mystery and skepticism. The idea below is not to prove or disprove their existence. There are a majority, not that that’s a determining factor, who do believe. We need an answer.

The fact is, humans are spiritual, at least, that is what they think. Here’s a quote from Marilyn Schlitz, PhD, is the Vice President of Research at the Institute of Noetic Sciences and Senior Scientist at the Research Institute of the California Pacific Medical Center.

Indigenous cultures hold no separation between healing and a connection to the sacred. If you examine various traditions, it is only within our own culture that we make this demarcation between what is the rationalist approach and what is our deep engagement with the mystery. From the survey studies, it is clear that people are hungry for a deeper sense of meaning and for a connection to their spirituality. Seventy-three percent of adults believe praying for someone else can help cure their illness; this is based on a CNN poll. Fifty percent of patients wanted physicians to pray with them.

Most oriental approaches believe human consciousness possesses access to the spiritual by itself. The divine spark is in each human from birth, it’s just a matter of finding and igniting it. Letting it freely flow to benefit oneself and others of its powers.

So, how did humans become spiritual? There’s one thing about having a mind conscious of one’s physical surroundings. It’s another to wander into the world of the imaginary, myths, and beliefs.

Did God invent humans, or did humans invent G/god? And the debate is on. Sacred books purport to develop ideas about a Supreme all-knowing, all-powerful Being. The prime document is the Bible which presents God as the Creator.

Where do such ideas come from? That such books exist is a given. But as to the existence of God and similar powerful far fetched characters, what is the reality of His, or their existence?

Remember, this is the preface, it presents the problem which the book Body-Mind issue, Solved will resolve. Here’s the point now.

How to move up the ladder of realms

Here’s the problem we have to solve. The 7 realms, from nothing to God, are extremely different. It’s not like taking a trip and simply stepping across a border from one country to another, visiting all seven states. There is an insurmountable barrier between all of these realms. I agree that between human nature (4) and consciousness (5), and consciousness (5) and spirituality (6) the separation appears small. This is the playground of the mind, which will be our focus during this book.

Body (3) together with human nature and consciousness (4-5) are the essence of the body-mind dilemma. Science says there’s no barrier, mind is an integral part of the body, somewhere in the neurons or spinal cord, it says, we don’t know exactly where yet, but we will locate it. Religion, on the other hand, says there is a barrier, it is a separate entity apart from the body. And for 430 years, and probably much longer, this hot debate rages.

Yet, in spite of this, we do have realms. They are a reality everyone admits exists. How do we move through the realms from nothing to God? That is the subject of this book. In so doing, we will see the visible and invisible, the material and spirit, the physical and metaphysical, the reality and myth.

Since Descartes’ dilemma of body and mind is still more rampant than ever, we can conclude that neither science, nor philosophy, nor religion has furnished a satisfactory solution. Expect to foray into unfamiliar territory. Whatever your education, culture, convictions and beliefs are, you will be surprised, and maybe bewildered by what you read. Unless you can put aside your pet-theories, classic teaching and prejudices, you will not get over the blockages that will arise.

If you want answers to all the questions about existence, anchor yourself for the coming turbulence.

Since you read all the way to here… you liked it. Please use the Social Network links just below to share this information from The Explanation, 7 Realms of Existence. How Can You Explain the Invisible?