Adam and Eve. In Hebrew, an Amazing Tale of Humans and Life

Adam and Eve, often considered a myth, reveal, through their names, humankind, and bountiful life.

Adam and Eve, naked in the Garden, from 1728 Figures de la Bible

God said, “Let us make man (H120) in our image… So God created man in his own image…” (Genesis 1:26, 27). In Hebrew, both words for man are adam. Gender-sensitive people read the translation and get upset with Bible names. The implication is man, but not woman, has God’s image. He’s a misogynist. No, He isn’t!

The first time we see Adam used as a name in the King James Version is in Genesis 2:19. Do this first exercise, Go over to UnlockBibleMeaning.com and look at those two verses in the interlinear Bible (Gen. 1:27, 2:19). You’ll see the Biblical Hebrew is identical.

Here’s a point to meditate on. I think the first time the man carries the name Adam is Genesis 4:25. Until then, every usage of adam, except Gen. 1:26, is preceded by a definite article (the man  – הָֽאָדָ֛ם) or, on a couple of occasions, by another qualifier. The first time, following Gen. 1:26, we see it as Adam (אָדָ֥ם) is Gen. 4:25.

The implication is until Gen. 4:25 the reference is to humans in general, and to the first human in particular. In other words, this is the story of humans, humankind, not just Adam and Eve.

Here’s a second exercise. Find Gen. 1:26, Switch to Strong, Click on Hebrew Concordance for H120. In the left column, you’ll see all the verses with their KJV translations. Note Numbers 31:35 and compare the Hebrew with Gen. 1:26. In Hebrew, adam is identical in these two verses. 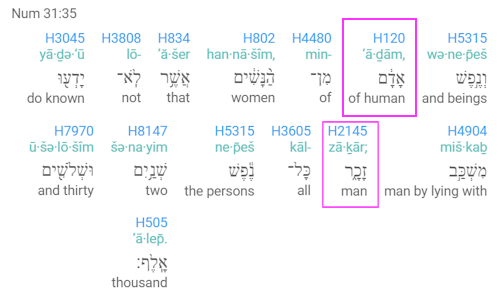 H120, adam, is translated persons in the KJV and human in the interlinear. In Numbers 31:35 adam refers exclusively to women. We should realize Bible names like adam can have multiple meanings (Key 1) and we have to be careful which one we use. In Gen. 1:26 the identical adam, there translated “God made man” would better be rendered with “God made persons (KJV), or humans (interlinear)” as used in Numbers 31:35.

Following Gen. 1:26, the next verse, 27, qualifies who these humans are, stating their specific genders. “So God created man (H120 – הָֽאָדָם֙ – we should understand persons, humans) in his own image, in the image of God created he him; male (gender-specific) and female (gender-specific) created he them.” We will discuss the Hebrew meanings of the names male and female over the next two episodes. Here are the translations and meanings of the name adam.

Use the Previous 5 and Next 5 links (below the KJV translations) to display the previous and next Strong’s entries, like H127. Compare the Hebrew letters and see the relationships between the words (H127 from H119), The Adam and Eve story depicts adam, humans, as lowly beings made of earth. Bible study of the state of humans confirms the meaning of this name.

After your study :), here's deeper meaning of the name, adam.

You can study the article for more detailed information about the adam part of the Adam and Eve story, and understand that for God all humans are ONE race. ALL human beings are EQUAL. Which means men and women are equal. The Bible points this out in Genesis 1:27, “In the image of God created he him; male and female created he them.”

As part of the Adam and Eve story, we come to the Bible name Eve. English leaves us ignorant of the important role and implication of the first woman in history. Here’s an example of Key 5 to unlock Bible meaning. A name gives us a narrative about the individual who carries it.

One of the interesting points about this woman is WHEN she received her name. God created her in Genesis 2, but she does not receive her name until Genesis 3:20 AFTER they both eat of the forbidden tree.

Here’s the meaning of her name.

This naming verse immediately follows God’s pronouncement of the death of the man and the woman in verse 19. Read it, “In the sweat of your face shall you eat bread, till you return to the ground; for out of it were you taken: for dust you are, and to dust shall you return.” it sounds like the END of civilization before it even begins. God pronounces the death sentence twice! But no, God has a plan and He will pursue His goal, which is intricately tied to the name of the first woman.

Naming Eve – life, immediately after pronouncing the death sentence, is New Testament theology, “For the wages of sin is death, but the free gift of God is eternal life in Christ Jesus our Lord: (Romans 6:23). God’s entire plan is present in Adam (all humans) and Eve (life-giver to all humans) in the first five minutes of the Bible story.

In the Adam and Eve story, Eve is Chava, which, according to H2332, is life-giver from H2331. God associates Eve with ongoing civilization. Not only is she the mother of all living, but through her, Mary, some 4000 years later, gives birth to the Messiah. The Savior of Humankind.

Eve means to live life. All of the above KJV translations reveal her future. The words promise life, nourish up, preserve alive, quicken, recover, repair, restore, revive, be whole, are all part of the narrative of humankind. God summed up His plan for humanity in one name, Eve, the root of which is LIFE.

Study and meditate on Eve’s role in the Adam and Eve story, then open the box below for more details.

Meaning of Eve in the Adam and Eve story.

After your study, 🙂 verify your findings with much more detail about the meaning of the Bible name Eve by reading the following article about Eve in the Bible.

Eve in the Bible. The Meaning and Reality for Today

With Adam and Eve, you’re on your way to mastery of Key 5 to unlock Bible meaning, understanding the role of Bible names. Thumbs up and let’s keep going.

Since you read all the way to here… you liked it. Please use the Social Network links just below to share this information from The Explanation, Adam and Eve. In Hebrew, an Amazing Tale of Humans and Life