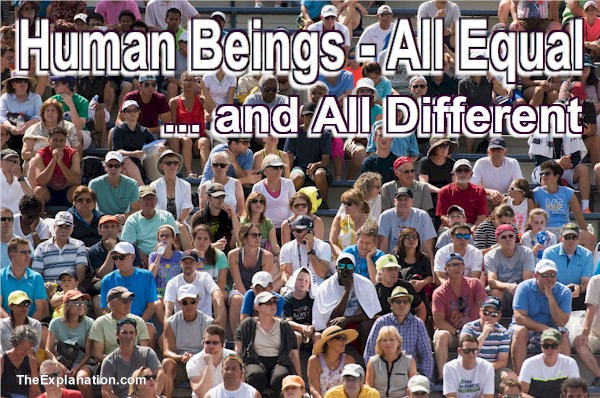 Human Beings – The Bible says we’re all created by God, and hence we’re all equal, but it also says He made us different. That’s not a contradiction; it’s complimentary.

Human beings, worldwide, we’re all one race, all equal. Yet there are different genders, and individually we’re all different.

Human beings, the human species, or the human race, that’s who we are. Worldwide, we have identical physiological and psychological makeups. We look and behave the same way. Yet we have different genders and a myriad of individualities. Here’s the origin of human beings.
(Origin of Humankind, chapter 1.5)

This post is a milestone in Origin of the Universe. From here on, in a lot of cases, we’ll be able to verify the Words of the Bible. From the beginning, I’ve said the Bible is the story of humankind. We are humankind, so the Bible is the narration of you and me. Does what the Bible says coincide with what you and I are? How we human beings think? How we live? How we behave? Is the Bible a faithful or deceptive description of humankind? Does it answer humankind’s fundamental queries?

Until this moment on the 6th day of Creation (which we cannot prove), God has created the heavens, Earth, atmosphere, water, land, flora, and fauna. No human being was there; nobody can verify any of that.

Now the Bible begins to talk about humans. Human beings exist. For the pieces of our puzzle to assemble neatly, the Bible narrative must correspond to the real world, whether it’s 500 BC or the 21st Century; this is where the rubber hits the road. Or, as the British would say, the proof of the pudding is in the eating. It’s no longer solely about God and His Universe; it’s about humanity and the universe where we reside.

It’s about human existence. At the outset of the book Origin of the Universe, I eliminated all the sacred books, except the Bible because it alone answers all the big, real, and philosophical questions about life. The Bible also must reveal day-to-day practical knowledge and solutions. It must be down-to-earth and, at the same time, give us the whole picture.

Do those two books, the description of the real world, dovetail with the Bible narrative? If yes, then the puzzle pieces are being assembled to give us a valid accurate picture. If no, then The Explanation is out to lunch! And you’re wasting your time reading this nonsense. We’ve discussed humans bearing the image and likeness of God, after His kind, Godkind. But since we have never seen or been in the literal presence of God, this is unverifiable. Today we will see what the Bible says about the origin and oneness of humankind; this is verifiable.

Chapter one of Genesis is setting the scene as we know. It gives us some overall fundamental concepts. If I relate it to our puzzle, I’d say it’s casting broad crayon outline strokes onto a canvas to provide us with the comprehensive picture to which the follow-up books add all the details. But those details hinge on and are attached to this global sketch. That said, if it’s the sketch, then pay attention because it’s the outline core to which all the branches and twigs relate in their outstretching way. No branch or twig has a life of its own away from the trunk.

Most people, notwithstanding their religion, have heard of the story of Adam and how Eve came from Adam’s rib. Some might feel this is the first reference to humankind in the Bible. Not exactly. The first instance is right here in Genesis 1.26-27. We are going to elaborate the humans are all ONE race aspect of these verses.

26 And God said, Let us make man (H120) in our image, after our likeness: and let them have dominion over the fish of the sea, and over the fowl of the air, and over the cattle, and over all the earth, and over every creeping thing that creeps upon the earth.

“Let us make man… So God created man.” In a modern translation, this word man would be an anomaly because of its gender implication. Let’s look at the Biblical Hebrew and focus on this one word for a moment. The reason for this is to show that all humans are ONE race. If this is the case, and it is, then ALL human beings are EQUAL; this means men and women are equal, exactly what I pointed out in Audit of the Universe.

KJV – ⨯ another, + hypocrite, + common sort, ⨯ low, man (mean, of low degree), person. (Sam: the signs x and + are translations from the Revised Standard Versions, not the KJV. That said, they are still an indication of the meaning of this ware)

אָדָם ʼÂdâm aw-dawm’; the same as H120 (אָדָם); Adam the name of the first man, also of a place in Palestine:

This grammar can lead to confusion when it comes to singular and plural nouns. In our case with adam rendered man by the KJV translators, mankind (H120) by Strong or humankind as I’d put it. The Hebrew word adam is not a singular male. Humankind is a singular noun but composed of multiple people. Those people are both men and women. In English, we’d say it or they, but in Hebrew, we say he for grammatical gender-agreement; this is precisely the case with the word adam.

Notice, Strong’s H120, that adam can be used to represent an individual (one person, be it a man or woman) or a collective group (hu)mankind (men and women). Its usage as the name Adam (H121) is also possible. Keep in mind there is no capitalization in Hebrew, so humankind and Adam are identical in Hebrew, and it’s up to the translator to figure it out!

All of this has implications on how we react to a translation of the Bible narrative. For instance, the Bible says Adam named his wife Eve (Genesis 3:20), but nowhere does it indicate anyone named the first man Adam. Adam simply adopts the name of what he is, red dirt.

The first time we see Adam used as a name in the English translation is in Genesis 2:19. And out of the ground (H127 see Further Study below), the LORD God formed every beast of the field, and every fowl of the air; and brought them unto Adam (H120) to see what he would call them: and whatsoever Adam (H120) called every living creature, that was the name thereof.

Instead of translating Genesis 2:19 Adam, it could easily be translated the man or the human. You’d have to look at the interlinear to see that the Hebrew says THE (הָ֣) Adam (הָ֣אָדָ֔ם the man, the human). In my opinion, the human would be a better translation because of the determinative article the. In English, we wouldn’t say the Adam, but we would say the human.

I don’t want to get ahead of myself here, but in Genesis 2:19 this term the human (הָ֣אָדָ֔ם) is in parallel to all the animals which were formed out of the ground, H127 (הָֽאֲדָמָ֗ה, notice the similarity of the Hebrew with the human, H120 (הָֽאָדָ֛ם) – See Further Study below). God formed humans and animals from the same substance, earth. The exception is Eve, who, although she too was earth, was formed from Adam. Think about that; we’ll see why.

Again, I don’t want to expand this subject, but that makes humans equal to animals on a purely physical composition level, we’re both soil. On this level, humans and animals are identical; this is what science keeps reminding us because science is limited to this physical, visible, measurable level. The difference between humans and animals is elsewhere, and it’s the reason why humans win all the Nobel prizes. I’ve already elaborated on this, and we’ll get to this in the Bible if you haven’t figured out the answer already.

Biblical Hebrew and the word adam are clear adam-people-humans-humanity are endowed with the image and likeness of God. We are ALL Godkind. We are ALL EQUAL.

This blog post is an excerpt from chapter 1.5 of the book Origin of Humankind.

Go to UnlockBibleMeaning.com > Genesis 1:26-27 and see Strong’s reference for man (H120) click on Next 5 below the reference. Notice H127 from H119, which means earth, soil, country, and land. Think about how all these words assemble to describe a human being, what a human being is (soil).

The RSV translates H120: hypocrite, common sort, low. They’ve taken the figurative approach (which is their choice, and in this instance, it’s correct). Human beings are dirt. This is very different from what a lot of humans, especially those in power positions (financially, intellectually, etc.), think about themselves, hence the term hypocrite. This very first reference to adam-humans tells us who and what we are.

Is the rubber hitting the road? Is this a realistic description of humankind that fits humans in the 21st Century?

Since you read all the way to here… you liked it. Please use the Social Network links just below to share this information from The Explanation, Human Beings – God Created them Equal but Different