Animal and Human Stages of Life and Sociability. What do They Tell Us? 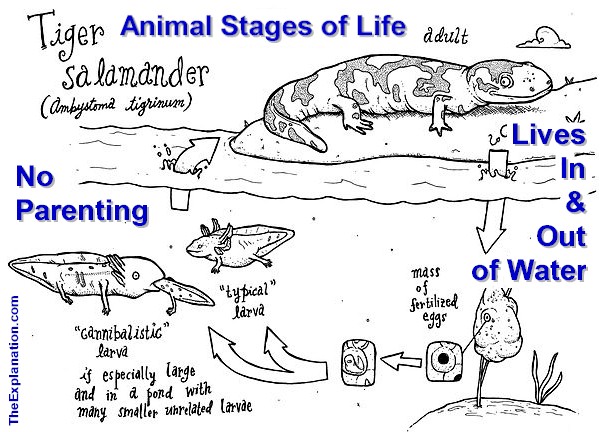 Animal and Human Stages of Life and Sociability reveal that although animals and man live on the same planet, they are worlds apart. Animal and Human Stages of Life and Sociability reveal that although animals and man live on the same planet, they are worlds apart. The Tiger Salamander breathes and lives in and out of water and is a no-parent species that is autonomous from the instant of its birth.

All animals, with their stages of life, have an uncanny talent to live and survive using their bodily functions and “ways of life.” These ways of life characterize the millions of species. Even within the same family, each animal has its own lifestyle. Female snakes have various ways of reproducing.
(chapter 10.7)

Seventy percent of snakes lay eggs generally in warmer climates, where the heat helps the incubation. However, when natural heat is insufficient, certain females have a mechanical way of heating their bodies. They shiver in order to keep the eggs warm.

This is unusual for cold-blooded reptiles. The rest produce live young. The anaconda actually nourishes its young through a placenta.

This is also unusual for reptiles. Other snakes combine both methods by incubating their eggs internally until they hatch. The babies are then born live. Stages of life vary greatly not only within the animal kingdom but also within particular species.

“Unintelligent” animals have a myriad of differing social habits that help them mate, reproduce, raise their young (though in most cases the young take care of themselves from the word go), and live in a balance of nature with each other, with the flora, and with the inanimate world.

“Unintelligent” #animals have a myriad of differing social habits that help them mate, reproduce, and raise their young. Click To Tweet

As we know, there is violence and confrontation (we watch videos of lions confronting buffalos and hyenas scavenging food). What this means is that animals kill to eat or in self-defense.

They do not perform wanton, wholesale destruction, nor do they kill for fun. Somehow, this vast arena has established a living equilibrium. Can we say the same for man?

Galacti interrogates me quizzically. “Why all these blurbs of information?” What is their relationship to stages of life? he asks. “I can see some readers being upset and disagreeing with such generalizations.”

“I see your point,” I say. “Well, we dealt with some of this in the fauna chapter, and I remind you that we are not dealing with zoology or the social attributes of animals. For more details, I refer you to the references section.

“The broad question is how each of these subjects, or pieces of the puzzle, relates to bringing peace and prosperity to Earth. The fundamental question is this: Do animals have a role to play in this? Can they participate in the discussion via clues and input? Maybe they can contribute through their way of life, but it would only be based on man’s observations and conclusions.

Do #animals have a role to play in bringing peace and prosperity to Earth? Or is this solely a human prerogative? Click To Tweet

“Can man answer the question of how to attain peace and prosperity? We’ll see more about that in Audit of the Universe, which is book two of this series. The point is that only man can ask that question. He alone can debate it and eventually lay out steps to attain it.

“There’s a huge, insurmountable gulf between animals and man. As much as we love animals, they can in no way participate in bringing peace and prosperity to Earth. They are as far removed from the process as Betelgeuse, a star situated 640 light-years away from our planet.

“This chapter and the blurbs are here in order to help us comprehend that although animals and man live on the same planet, they are worlds apart.” And the unique cycle of stages of life of humans plays an important role in this differentiation.

This post is an excerpt from chapter 10.7 of Inventory of the Universe.

This video is more about development to birth. But it is instructive and revealing in discussing Lamarck’s scientific or rather unscientific contribution, his way of analyzing such development, which has erroneously become part of the biological thinking process.

In this next video from Illustra Media’s documentary FLIGHT: THE GENIUS OF BIRDS we’ll enter a fertilized egg to follow a bird’s embryonic development. Spectacular animation and live action footage document the extraordinary 21-day process of organization and growth from a few cells into a chicken. Again, more ‘development’ but spectacular.

This one is about animal life cycles … I promise. Various types of animals and their stages of life including their metamorphosis from one stage to a totally different one. Think about this in comparison to human stages of life.

Since you read all the way to here… you liked it. Please use the Social Network links just below to share this information from The Explanation, Animal and Human Stages of Life and Sociability. What do They Tell Us?