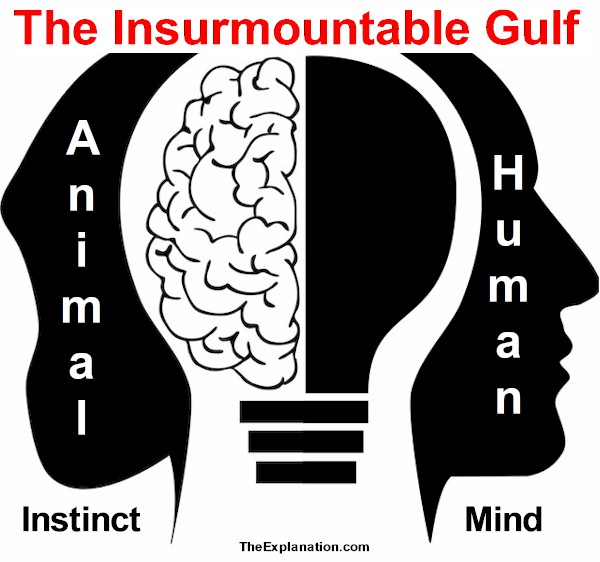 Animal instinct versus human intelligence. Who comes out ahead? There’s no doubt animals have a ‘certain intelligence’ beyond their instinct … but does that give them an edge? Animal instinct versus human intelligence. Who comes out ahead? There’s no doubt animals have a ‘certain intelligence’ beyond their instinct … but does that give them an edge?

Animal instinct is powerful, but the areas where man excels are his brain and his mind, although sometimes we wonder about this! We associate thought, reason, emotion, and creativity with these aptitudes. Along with this, man has manipulative dexterity. He uses his hands essentially to formulate and fabricate whatever he imagines.
(Inventory or the Universe, chapter 10.9)

Man has a mind to formulate and hands with manipulative dexterity to fabricate whatever he #imagines. Click To Tweet

Finally, his vocal cords and the written word give him the capacity to communicate knowledge, exchange ideas, interact on a social level within his institutions (such as families and communities), and transmit his know-how to future generations.

Man has vocal cords and the written word to #communicate, exchange ideas and interact on a social level Click To Tweet

The magnitude of this combination of man’s brain and body is unimaginable. Who would have ever thought a 3-D printer was possible? Yet man invented it. In this area, man surpasses animals.

We’re almost at the end of Inventory of the Universe. But this end is really just the beginning. The beginning of the story of mankind. This inventory culminates with mankind’s intelligence compared to animal instincts. You need to be thinking about whether animals and mankind are on the same level.

This post is an excerpt from chapter 10.9 of Inventory of the Universe.

There just aren’t a lot of decent videos referring to this subject of animal instinct and human intelligence. In fact, I couldn’t find one. The video below reveals what animals can accomplish, very limited compared to humans. The conclusion is the key. Humans can analyze animals telling us more about our mind compared to animal instinct.

Since you read all the way to here… you liked it. Please use the Social Network links just below to share this information from The Explanation, Animal Instinct and Human Intelligence, the Insurmountable Gulf