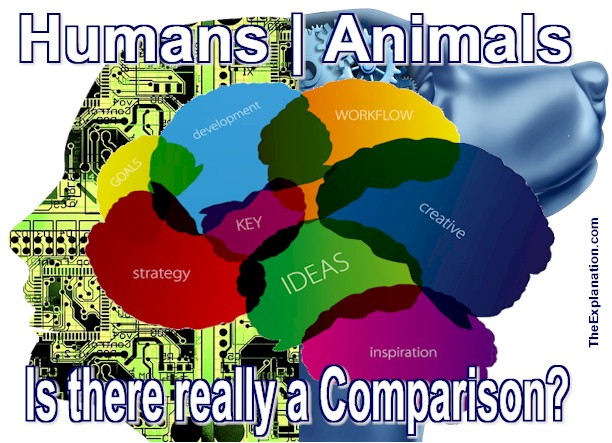 Intelligence is common to both animals and mankind. But, do they possess intelligence to the same degree? And what about the level of their minds and instincts? Intelligence is common to both animals and mankind. But do they possess intelligence to the same degree? And what about the level of their minds and instincts?

“Sam,” says Galacti, “I see where you’re going with this. You appreciate animals, but you are explaining the vast difference between what they and mankind have accomplished on Earth.” Intelligence is a factor.
(Inventory of the Universe, chapter 10.10)

“Indeed,” I say. “In chapter six I covered animal ability—an ode to their capabilities, as well as pointing out their incredible intelligence, talents, and emotions.

I’m aware of ethological studies of animal behavior in their natural habitat as compared with laboratory studies. These studies are revealing that we have underestimated the capacities and behaviors of animals.”

However, when we look at the world today, who is transforming it? Who is at the heart of all, and I mean all the changes, modifications, and revolutions that have historically taken place and are reordering society at a seemingly speedier pace today? I believe the answer is man, and I believe readers would agree with this.

From that point of view, animals, with all their intelligence, emotions, and behavior, have not had any impact on this planet’s forward march into the twenty-first century.

Animals, with all their #intelligence, emotions, and behavior have had no impact on this planet’s forward march, only man has. Click To Tweet

Animals are in the same non-participative state as they were in the nineteenth, fifteenth, and any other century. They have made no progress whatsoever other than adapting to adjustments man has caused to their environment.

The idea in this chapter is not to denigrate animals and laud man. It is simply to state some clearer differences.

I think it is fair to say that under normal circumstances, the most intelligent animal doesn’t come close to the dumbest human. There’s not just a gulf between animals and humans, there’s a huge chasm.

“We’re taking Inventory of the Universe and the animate, living, brainy, walking, swimming, flying portion of that universe,” Galacti reminds us. “This is certainly the crux of what it’s all about. This is where the highest living organisms are.”

Although the animals run off with all the Olympic medals on this animate scale, man wins all the Nobel prizes, hands down. It’s certainly worth contemplating that animals are more physically oriented while man is more intellectual.

Animals run off with all the #Olympic medals while man wins all the #Nobel prizes, hands down. Click To Tweet

This post is an excerpt from chapter 10.10 of Inventory of the Universe.

This incredible video illustrates why the octopus is one of the ocean’s most complex and enigmatic creatures which should be studied, not served in restaurants.

The octopus uses cognitive reasoning to make deductions and understand its environment. It can shape shift, change color and texture on the fly to blend in with its surroundings to become either predator or defend itself from becoming prey.

Truly amazing what they can do … but could they produce a video about man like this video of octopuses? The answer to that question is very important to understand relative intelligence and the role of animals and humans.

Since you read all the way to here… you liked it. Please use the Social Network links just below to share this information from The Explanation, What Is Animal Intelligence? What Is Human Intelligence? Do they Compare?