Bethlehem birthplace of Jesus. Why there? What’s the Big Deal? 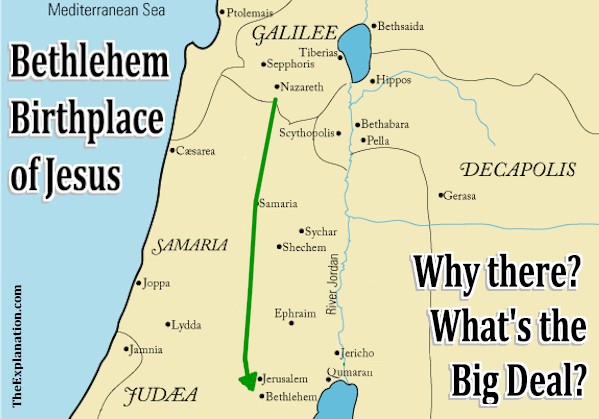 Bethlehem is a small, obscure town only ten kilometers south of Jerusalem. Its aura is worldwide, being the birthplace of Jesus Christ. Here’s why He was born there.

Today, Bethlehem’s main point of interest is the Church of Nativity, to which tourists flock around Christmas time. Whether Christ was born in the winter month of December when no shepherds would be around is another question we will not broach here. The Bible clearly states this is where He started His earthly life. I put He and His in capitals because Christ is both God and human, a tough concept to grasp.

The three key cities associated with the life and ministry of Jesus are Bethlehem, Nazareth, and Jerusalem. This is not a hazard. I’m dedicating the following three weekly posts to explain why these three cities, in that order, are the focus of His ministry. We have just finished the Bible course Unlock Bible Meaning with 7 Keys to Master Biblical Hebrew. The fifth key is all names have a meaning. The three city names describe Christ’s ministry; they lay the foundation for the purpose of His First Coming as we shall see.

Let’s jump into the Biblical Hebrew name of Bethlehem at UnlockBibleMeaning.com and do a word search for Bethlehem.

The first reference is Genesis 35:19. Then switch to Strong’s

And Rachel died, and was buried in the way to Ephrath, which is Bethlehem (H1035).

Here is the reference H1035. Remember, we have to follow it to the root (Key 6 to Master Biblical Hebrew) to dig up the full original meaning of God’s Word.

לָחַם lâcham law-kham’; a primitive root; to feed on; figuratively, to consume; by implication, to battle (as destruction):

Many know the Hebrew meaning of Bethlehem as the House of Bread, but that’s only half the story, the nice or love half where most Christians would stop because Christ is love. Christianity has focused on the Bread and talks about love… that’s true, but incomplete, only half the story. Bethlehem, His place of birth.

The entire name gives the full narrative. That’s included in the root meaning, H3898, battle (as destruction), devour, fight, war. Christianity, and most theologists, have difficulty with that side of Christ’s birthplace. They omit the 2nd Key to Master Biblical Hebrew; multiple meanings can include contradictory meanings. Here is a prime example. Clarity demands we look for Bible corroboration. Let’s see what Mary, His mother, pronounced upon her arrival at Elizabeth, a family member’s home.

49 For he that is mighty has done to me great things; and holy is his name.

50 And his mercy is on them that fear him from generation to generation.

51 He has shewed strength with his arm; he has scattered the proud in the imagination of their hearts.

52 He has put down the mighty from their seats, and exalted them of low degree.

Mary sums it up nicely, “put down the mighty… scattered the proud.” That’s the battling, warring, and devouring Christ, when He needs to put that hat on. By the way, some wonder why a good God put a hapless Adam and Eve out of the Garden of Eden. Here’s part of the answer, He scatters the proud. Here’s a definition of proud from the Oxford dictionary, “feeling deep pleasure or satisfaction as a result of one’s own achievements, qualities, or possessions.” That’s the result of eating from the Tree of the Knowledge of Good and Evil. And we’re still eating of that Tree today, that causes proudness.

Bethlehem signifies the double-sided nature of the Coming of Christ. Two key aspects to His Ministry 2000 years ago, before that with Adam and Eve and His often disobedient, proud nation of Israel. And at His Return, the Second Coming, when He will deal with proud nations.

There are so many Scriptures about this. Do your own study.

32 Whosoever therefore shall confess me before men, him will I confess also before my Father which is in heaven.

33 But whosoever shall deny me before men, him will I also deny before my Father which is in heaven.

36 And a man’s foes shall be they of his own household.

Christ came to show those who accept Him the way to peace. But, He did not come to establish only peace, not by a longshot. The profound meaning of Bethlehem reveals He came for a double purpose. This Bethlehem ministry, with its contradictory nature, was prophesied long before His First Coming.

1 Now gather yourself in troops, O daughter of troops: he has laid siege against us: they shall smite the judge of Israel with a rod upon the cheek.

2 But you, Bethlehem (H1035) Ephratah (H672), though you be little among the thousands of Judah, yet out of you shall he come forth unto me that is to be ruler in Israel; whose goings forth have been from of old, from everlasting. (Sam: this prophecy is AFTER King David lived and refers to another ruler who has been around in the past forever, referring to Christ’s Eternal Life.)

3 Therefore will he give them up, until the time that she which travails has brought forth (Sam: the Virgin Birth but also prophetic of a time of national tribulation before a great deliverance of His people): then the remnant of his brethren shall return to the children of Israel.

4 And he shall stand and feed (H7462  both pastor, feed His flock and devour, eat up the enemy) in the strength of the LORD, in the majesty of the name of the LORD his God; and they shall abide: for now shall he be great to the ends of the earth.

5 And this man shall be the peace, when the Assyrian shall come into our land: and when he shall tread in our palaces, then shall we raise against him seven shepherds, and eight principal men.

6 And they shall waste the land of Assyria with the sword, and the land of Nimrod in the entrances thereof: thus shall he deliver us from the Assyrian, when he comes into our land, and when he treads within our borders. (Sam: this is future prophecy, the point to note is Christ will deliver His people, using all the force of the sword when it’s necessary to do so.)

Study feed, H7462. You’ll see Key 2, contradictory meanings, for the same action. When you SAVE something, you have to PUT DOWN the oppressor. This passage about Bethlehem is all about this opposition that characterizes God’s mission, not only for the Israelites but for all people.

רָעָה râʻâh raw-aw’; a primitive root; to tend a flock; i.e. pasture it; intransitively, to graze (literally or figuratively); generally to rule; by extension, to associate with (as a friend):

Do you see the contrast?

Above, we saw Bethlehem carries another name, Ephrath, which is Bethlehem. You know the exercise, check its meaning.

KJV – once (Psalm 132:6) perhaps for Ephraim; also of an Israelitish woman; Ephrath, Ephratah.

Look at grow, increase. In other words, Christ’s Ministry is something that starts small, Bethlehem is little among the thousands of Judah (Micah 5:2), like the mustard seed, grows, and develops, over time, into a tree for the birds (Matthew 13:32, Ezekiel 17:23). This is a process and you have to understand where you and the world and Christianity are in this process. Unfortunately, there’s a lot of miscomprehension about personal and world peace. There has never been as much personal and world anxiety as there is now. Christ can give you peace, but you have to understand how. It’s another subject.

There is an all-important second reason why Jesus was born in Bethlehem. King David was born there. Of all the authors of the Old Testament, King David, in his writings, the Psalms, was undoubtedly the most prominent prefiguration of Jesus Christ. Others, like Adam, the first man, Abraham, the father of the faithful, and especially Moses, who released Israel from slavery, are prefigurations. But David expresses the innermost thoughts and the Ministry of Jesus Christ. It’s another fascinating and profound subject.

And Joseph also went up from Galilee, out of the city of Nazareth, into Judaea, unto the city of David, which is called Bethlehem; (because he was of the house and lineage of David.)

Now David was the son of that Ephrathite of Bethlehemjudah, whose name was Jesse; and he had eight sons: and the man went among men for an old man in the days of Saul.

Matthew, in his gospel, reveals astounding details in his inspired genealogy.

Note that in verse 6, David receives the title King. No other individual in the genealogy receives any description, nobody. In verse 17, Abraham and David, two of the highest points in the history of Israel, and the Babylonian captivity, one of the lowest points are the key markers of this genealogy. Think in terms of lechem, eating-being eaten, fighting-surrendering, victory-defeat, these are the vicissitudes of the history of God’s people. Mat. 1:1, the opening verse of the book says it all, “Jesus Christ, the son of David, the son of Abraham.” The progressive stages from Abraham through David on to Christ sum up God’s entire spiritual purpose for humankind.

David of the most humble origins, put aside by his family but chosen by God. Christ from humble origins, rejected by the people but the Chosen of God. David, author of the Psalms, where we find more references to the Ministry of Christ than anywhere else, in particular the parallels between David and Jesus’ lives. In the image of God, Abraham prefigured Christ as the father of the faithful, and David as King of Israel. David received the pattern to build the Temple, the fulfillment being Christ Who is the Alpha and the Omega, the Foundation of the Church, the Spiritual Temple of which He is the Architect.

Bethlehem was the birthplace of King David, the man of lechem, who brought physical and spiritual bread to Israel and who was a man of action, a mighty warrior. He prefigured Jesus, who likewise feeds His flock and will do battle to eliminate the mighty of this world, as David did with Goliath. Bethlehem sums up beautifully the dual aspects of the purpose of the Ministry of Jesus Christ.

Since you read all the way to here… you liked it. Please use the Social Network links just below to share this information from The Explanation, Bethlehem birthplace of Jesus. Why there? What’s the Big Deal?