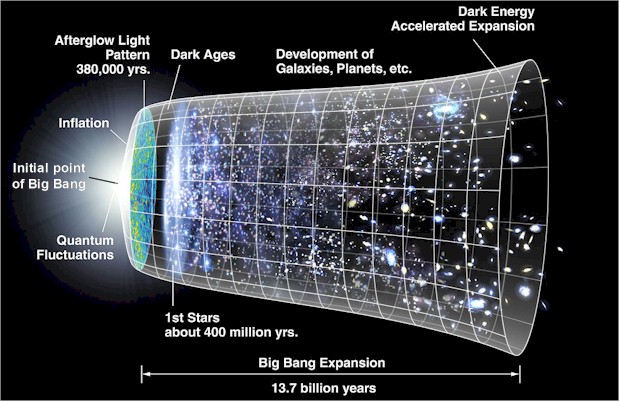 Big Bang, and The Book Series ‘The Explanation’ begins: Big Bang expansion. Note the initial ‘point’ of departure on the left that contained the entirety of the material that now occupies our Universe (image source)

There is enough scientific evidence now available to us, thanks to the incredibly complex tools mankind has developed to penetrate the depths of the Universe, for a consensus by cosmologists in favor of Big Bang. This is The Explanation that is prevalent.

Powerful telescopes on Earth and sturdy satellites equipped with highly sensitive detection devices whiz through space at up to 60,000+ km/hour (1.5 times around earth in one hour) gathering and transmitting data that allows us to almost street map the 13.7 billion light years that separate us from the initial Big Bang.

What mankind has accomplished is astounding, but scientists freely admit that there are major questions and pockets of knowledge that are unknown. Mike Wall from Space.com wrote, ‘While much about the Universe’s first few moments remains speculative, the question of what preceded the Big Bang is even more mysterious and hard to tackle.’

Let me add a dimension to this question, in other terms, if the initial infinitely dense, intensively hot particle of the Big Bang was the minutest point, like on the image to the right or the initial point on the image above, what surrounded it? In what environs, medium, milieu was it? It’s very hard to choose a word to describe this setting because it is simply unknown.

Read Mike Wall’s article. It is a brief, clear explanation of the Big Bang origin of our Universe with evidence and other, as yet unanswered, but fascinating conundrums about our origins.

The Explanation intends to highlight both the scientific evidence and the fundamental as yet unanswered questions as we turn over the puzzle pieces in a quest for a focused image. Keep in touch as we proceed with that quest, sign up in the right margin for blog post and book publication notifications. No obligations.

Since you read all the way to here… you liked it. Please use the Social Network links just below to share this information from The Explanation, Big Bang. The exciting book series The Explanation begins