Body Care – Day in, Day out Our Physical Body is Present. How do we Treat it? 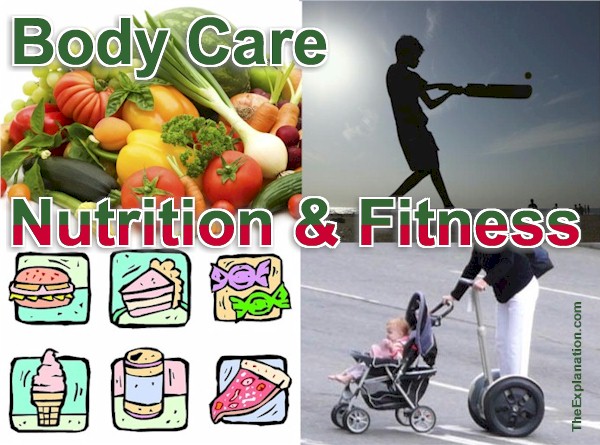 Body care is a multi-billion dollar sector of the economy. In particular, it is a very personal issue. We all have an interest in caring for its well-being. How are we doing?

Body care. Depends a lot on nutrition and fitness. How are we doing in these two areas of treating our bodies?

“We are creating real benefits via body care, as we’ve just observed, for the bodies of individuals and humanity in general,” Galacti says. “But are there any secondary effects? Let’s examine. Our audit of medical accomplishments tells one side of how humans value their bodies, but it’s a rarified look. We see a bird’s-eye view of what the experts and professionals do.”
(Audit of the Universe, chapter 8.2)

Body Care on a daily basis and unforeseen Health Costs

I respond. “Like in our overall investigation, it’s important that we see the whole picture and not just a piece of the puzzle. Now let’s talk about the day-to-day habits we have toward our bodies. All intelligent beings are the sum of their habits. What do our habits say about us? Are they beneficial or detrimental to our health, welfare, and lifespans?”

Consider a medieval farmer in Europe or in Asia. He woke up near dawn to tend his fields and livestock, working until sunset made it too dark to see. Besides farming and shepherding, each day required him to chop wood, carry water and walk for miles. Each calorie he took in by eating required hard physical labor to produce and earn. Those calories were fresh and largely unprocessed and included many fruits, vegetables, and whole grains. Excellent for body care. Our bodies are designed for movement and work.

Compare this to a modern executive’s relationship with food. He wakes before dawn and returns home after dark, but his workday consists of sitting in his car or sitting at a desk. His calories—oftentimes, of which he consumes more than he expends—are commonly prepackaged and preprocessed. His diet contains fewer whole grains, fruits or vegetables, and more fat, sugar, and salt.

Our relationship with food has changed significantly over the centuries. What used to require a thousand calories to produce now takes fifty calories to buy. Whole grain loaves from grain we grew have given way to soft, sugary bread we buy from a rack at the store, or a “Happy Meal” bought and consumed in the car. This imbalance, like the other imbalances we’ve examined in or audit, causes problems — in this case illnesses like obesity, diabetes, and heart disease. In developed nations worldwide, the cost of medical problems related to overeating far exceeds the costs of malnutrition. Our lifestyle impacts body care.

Sometimes, the best food choices for uplifting body care are easy to see but more difficult to act on. A mother in an impoverished neighborhood of a major city like London, Beijing or Chicago might know to avoid processed foods and to prepare fresh vegetables for her children—but well-supplied grocery stores and farmer’s markets are few and far between in a slum. The economic realities of access to nutritious foods forces her to feed her children with wilting lettuce, frozen peas and bags of processed carbohydrates. Not to mention foods that lack the necessities of basic nutrition like proteins, trace elements, vitamins and essential minerals that body care demands.

Drinking soda instead of water is unhealthy, but the realities complicate that decision. In much of Mexico, tap water is unsafe to drink. Much like our medieval ancestors drank beer because it was safer than untreated water, many Mexicans drink soda because it is cheaper and easier to obtain than safe drinking water. Increased consumption of soft drinks in Mexico has happened concurrently with the country becoming the world’s worst in obesity per capita.

A similar health problem appeared in Central America and Africa when baby formula was first introduced to developing nations in those regions. Although the formula is a healthy alternative to breast milk, this is only the case if it’s made using safe drinking water. The unintended consequences of bringing powdered formula to a community without safe water included as many as one million infant deaths from malnutrition and diarrhea.

Staying fit, use It or lose It

Keeping our bodies healthy requires two sides of a behavioral coin. On the opposite side from eating right is getting sufficient exercise. French health resources recommend walking a minimum of 10,000 steps each day, while American information pegs the minimum at 20 minutes of moderate exercise daily. Fitness professionals recommend 30 minutes of cardiovascular workouts three days a week, plus vigorous resistance training on three other days. The details aren’t as important as their clear consensus: daily vigorous activity is an important part of treating our body care with respect.

When allowed to remain sedentary, body care is not at its best. Insufficient activity leads to increased risk of obesity, heart disease, diabetes, and some forms of cancer — as well as various mental illnesses including anxiety and depression disorders. Remaining active after turning 50 can slow—and in some cases reverse—age-related degeneration of muscle and bone.

Our children are a telling illustration of how this growing inactivity affects peace and prosperity by limiting our health and wellness. Since 1999, the number of obese teens in developed countries has increased to where nearly one in five boys is obese. That boy lives daily with the exertion of carrying extra fat, the discomfort of needing two seats on the school bus and being ridiculed by classmates and often by teachers. As an adult, he will suffer even more physical discomfort, be discriminated against for jobs and promotions, and likely die early from heart disease, diabetes, or several kinds of cancer.

In 2010 alone, we spent $665 billion worldwide on exercise, nutrition, fitness, and weight loss programs. Athletic events like the Olympics and World Cup attract audiences of billions each year, and elite athletes are admired in all nations. We idolize these athletic paragons, precisely because we value and respect the importance of health and wellness.

We show that appreciation and respect in the widespread popularity of programs that encourage physical fitness. The “Exercise is Medicine” initiative is an example of one such program. Practiced in 31 countries, promoted by national governments and supported with private donations, it combines a free-for-everybody “Action Guide” with incentives for individuals to take responsibility for their own health. Programs like this are common throughout the developed world, led by medical professionals, government officials and corporate leaders alike. This is real promotion of body care.

Through their influence, and many others men and women have found the motivation and resources to make positive changes to their own health. It doesn’t matter whether it’s running, fitness, gym, dancing, indoor, outdoor, personal or team fitness programs, it’s your body and each one’s decision for personal body care. Initiatives like this demonstrate that we are willing to take action toward better health if given even a small push and that the organizations we participate in are also becoming aware of the vitality of the physical body.

This blog post is an excerpt from chapter 8.2 of the book Audit of the Universe.

Since you read all the way to here… you liked it. Please use the Social Network links just below to share this information from The Explanation, Body Care – Day in, Day out Our Physical Body is Present. How do we Treat it?