A Healthy Body is the Quest of all Humans – How are We Doing? 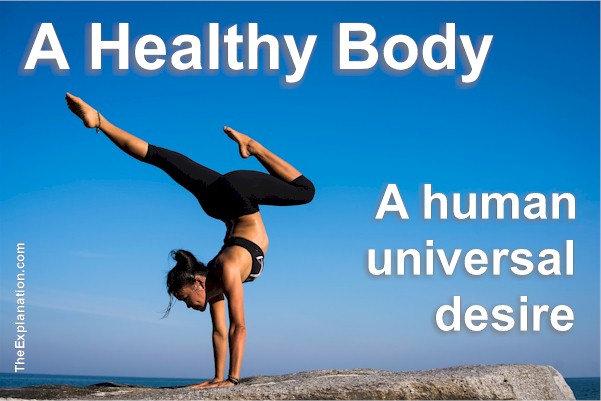 Each human being wishes for a healthy body. We spend billions on technology and personal care. Are we making our dream come true?

A healthy body – A legitimate human universal desire. How can we best achieve that goal?

Images of a healthy body, both female and male adorn our daily media. They’re very often picture-perfect on the outside but how are we treating our human bodies?
(Audit of the Universe, chapter 8.1)

“You saw during our inventory of Fauna that the animal kingdom is one of specialists,” Galacti remarks “Cheetahs run faster than men. Monkeys climb higher. Tortoises live longer. Yet human bodies are still very impressive.”

We walk to Venice with the help of our traveling tour guide, to the Gallerie dell’Accademia where we view the muscled, graceful image of DaVinci’s Vitruvian Man, the epitome of a healthy body. “Consider your eyes: not as sharp as a cat’s, nor far-seeing as an eagle’s, but only your eyes can decipher writing. Your hands are not as strong as a gorilla’s, but unique on the earth in their capacity for fine manipulation. An elephant’s legs are stronger, but only yours can dance. Your bodies are wonderful machines, worthy of care and respect.”

I begin to shrug off the compliment, as we humans so often do, but I am struck by the complexity of structure and engineering behind even such a trivial movement. Galacti is right.

“Of all things in the universe,” he continues, “human bodies are truly the extension of the human mind. You are their master, in control of how you treat it and how you keep your healthy body, and to what ends you apply its impressive potential. I must ask now how you steward your healthy body? How well do you care for it, both as an individual in charge of a healthy body, and as an entire race caring for all humans in existence?”

Of all things in the universe the human healthy body is truly the extension of the human mind. You are their master, in control of how you treat it and how you keep your healthy body, and to what ends you apply its impressive… Click To Tweet

Our Body of Knowledge

We tend to spend our money on what we most value, so the $264 billion spent annually on health research worldwide seems to say that we humans do respect and value our bodies. This money goes toward new ways to extend life and health, and to cure serious illnesses, as well as researching new technologies that help us accomplish the same goals.

As we audit the pros and cons of how each of us treats our healthy body, let’s see where we are in 2018. Are the methods we’re using to treat ourselves to remain vigorous and strong regressing, stable or improving? How is our general health doing?

Alexander Fleming discovered Penicillin in 1928, and we put the first medical antibiotic based on that discovery to work in the middle of World War 2. Antibiotics kill bacterial infections which could become health-and-life threatening like pneumonia, pinkeye, and blood poisoning. Prior to the broad use of antibiotics, the three leading causes of human death were pneumonia, tuberculosis and diarrhea dehydration from illnesses like dysentery or cholera. All of these illnesses are cured by the appropriate use of antibiotics, and all have disappeared from the top causes of death in developed and practically all nations.

Antibiotic use does have a problematic side. Doctors often over-prescribe them, and patients tend to use them incorrectly. This has led to a trend toward antibiotic resistance among bacteria. Strains of tuberculosis and staphylococci that are immune to many antibiotics are appearing in even the most advanced hospitals and countries. Doctors fear a new age of epidemics stemming from the development of “superbugs” that our pharmaceutical weapons can’t harm.

Salk’s polio vaccine ushered in another life-saving trend when he was able to prevent polio throughout the developed world. From that beginning, we have developed vaccines to prevent more than 20 previously common illnesses. Rates of childhood and adult infection for these illnesses have dropped dramatically since vaccination became a widespread practice, and some diseases — notably smallpox, diphtheria, and polio — are all but extinct. That means a more healthy body for many more people.

Vaccinations, like antibiotics, are not without their disadvantages. Many doses inflict side effects including fever, soreness, and mild symptoms similar to the disease they are intended to prevent. About one child in a million is severely allergic to vaccines, and since vaccinations happen early in life, a serious reaction is often the first sign doctors and families have of such an allergy.

Our history of medical technology dates back surprisingly far in time. Archaeologists have found evidence of skin grafts, false teeth, and even brain surgery from as early as the 3rd century BC.

Many of our modern medical wonders are simply improvements on existing devices and techniques. We build more accurate x-rays and sharper scalpels every year, but a few specimens of medical technology have opened wider potential. They won’t create a healthy body, but they will go a long way to helping health.

With regard to technology and scientific progress, there have been tremendous strides over the past few decades to better care for and have a healthy body. There are drawbacks and the question is, will we overcome them?

With regard to technology and scientific progress, there have been tremendous strides over the past few decades to better care for and have a healthy body. There are drawbacks and the question is, will we overcome them? Click To Tweet

This blog post is an excerpt from chapter 8.1 of the book Audit of the Universe.

Since you read all the way to here… you liked it. Please use the Social Network links just below to share this information from The Explanation, A Healthy Body is the Quest of all Humans – How are We Doing?