Body Health – Is it Getting Happily Better or Worse Today? 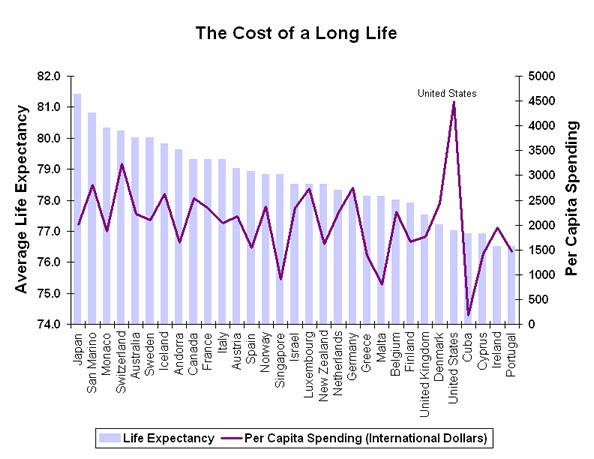 With an audit of body health, we pursue investigating the state of the world. Do you realize that money invested in health care is not a guarantee of a longer life? Higher spending on body health care does not necessarily prolong lives. Witness these statistics from the World Health Organization. In 2000, The United States spent more on health care than any other country in the world, yet life expectancy ranked 27th in the world, at 77 years. (Image credit)

Our Body of Knowledge

We tend to spend our money on what we most value, so the $264 billion spent annually on body health research worldwide seems to say that we humans do respect and value our bodies. This money goes toward new ways to extend life and body health, and to cure serious illnesses, as well as looking for new technologies that help us accomplish the same goals.

Alexander Fleming discovered Penicillin in 1928, and we put the first medical antibiotic based on that discovery to work in the middle of World War 2. Antibiotics kill bacterial infections which could become health-and-life threatening like pneumonia, pink eye and blood poisoning. Prior to the broad use of antibiotics, the three leading causes of human death were pneumonia, tuberculosis and diarrhea dehydration from illnesses like dysentery or cholera. All of these illnesses are cured by appropriate use of antibiotics, and all have disappeared from the top causes of death in developed nations.

Antibiotic use does have a problematic side. Doctors often over-prescribe them, and patients tend to use them incorrectly. This has led to a trend toward antibiotic resistance among bacteria. Strains of tuberculosis and staphylococci that are immune to many antibiotics are appearing in even the most advanced hospitals and countries. Doctors fear a new age of epidemics stemming from the development of “superbugs” that our pharmaceutical weapons can’t harm.

Salk’s polio vaccine ushered in another life-saving trend when he was able to prevent polio throughout the developed world. From that beginning, we have developed vaccines to prevent more than 20 previously common illnesses. Rates of childhood and adult infection for these illnesses have dropped dramatically since vaccination became a widespread practice, and some diseases — notably smallpox, diphtheria and polio — are all but extinct.

Vaccinations, like antibiotics, are not without their disadvantages. Many doses inflict side effects including fever, soreness, and mild symptoms similar to the disease they are intended to prevent. About one child in a million is severely allergic to vaccines, and since vaccinations happen early in life, a serious reaction is often the first sign doctors and families have of such an allergy.

Our history of medical technology dates back surprisingly far in time. Archaeologists have found evidence of skin grafts, false teeth, and even brain surgery have from as early as the 3rd century BC.

Many of our modern medical wonders are simply improvements on existing devices and techniques. We build more accurate x-rays and sharper scalpels every year, but a few specimens of medical technology have opened wider potential.

Since then, human testing is still in progress for both more complex organs and the process by which those organs can be implanted into human patients. Though still limited because even the best 3-D printers can’t yet produce objects as small as human capillaries — a vital element in the most important organs — researchers hope to be able to produce printed, on-demand, 100% compatible organs by 2020.

These telepresence robots allow shut-in patients and practitioners in remote areas to communicate with healthcare professionals from nurses to doctors to counselors in real-time. This means both your grandmother at home alone and a child in a developing nation could receive the same level of body health care as they might receive in a major medical center.

“We’ve just observed how that creates real benefits for the bodies of  individuals and humanity in general,” Galacti, our ubiquitous roving reporter says. “But are there any secondary effects? Let’s examine.”

Drugs are undeniably part of our species’ most impressive medical solutions, near-miraculous in their ability to treat our bodies on-demand using portable tools like pills, inhalers and injections. From headaches to high blood pressure to diabetes, modern drugs are the go-to answer for many medical problems.

In our chapters on the sea and land, we saw the unintended consequences of industrial production and farming: pollution leaching out of the process and into the water supply. When we use medication, most of that medication enters the body and does what it’s supposed to do … but some of it leaches into our urine and out into the environment when we urinate.

Unlike disease-causing microbes, sediments and pollutants in the water supply, medicines are not filtered out by most civic water treatments. As early as 1976, detectable levels of ibuprofin, nicotene, caffeine and cholesterol medications were found in urban water supplies. More recent studies have found residue of prescription and over-the-counter medications in 80 percent of streams and rivers throughout the developed world.

Over the 40 years since that first study, mutated fish have appeared in greater numbers, but science has yet to “nail down” the exact consequences of this specialized pollution on those who drink the tainted water.

What is clear is that, as with many of our best and worst accomplishments, our use of drugs to treat and support our bodies may have unanticipated consequences far beyond ourselves.

The best medical technology is only as good as the people using it. According to statistics compiled by the World Health Organization, nosocomial infections — those contracted in a hospital — account for 37,000 deaths in Europe and 99,000 deaths in the US annually. At any given time, approximately one patient in ten receiving treatment in the developed world will develop a fatal or nonfatal infection of this kind.

Nosocomial infections are particularly dangerous because the bacteria involved bred and spread inside a hospital — an epicenter of strong antiseptics, antibacterials, and antibiotics. The bugs that survive there are frequently the “superbugs” we discussed earlier in this chapter, and among the most difficult to control. A body infected by such a resistant bacteria can lose limb, organ or life as the infection spreads out of control.

“Our audit of medical accomplishments tells one side of how humans value their bodies, but it’s a rarefied look,” Galacti says. “We see a bird’s-eye view of what the experts and professionals do.”

That’s the key to Audit of the Universe. It’s an overall investigation, and it’s important that we see the whole picture as objectively as possible and not just a piece of the puzzle. Beyond our personal body health we can pose the question, is the world getting healthier or not in every sense of the term?

Since you read all the way to here… you liked it. Please use the Social Network links just below to share this information from The Explanation, Body Health – Is it Getting Happily Better or Worse Today?