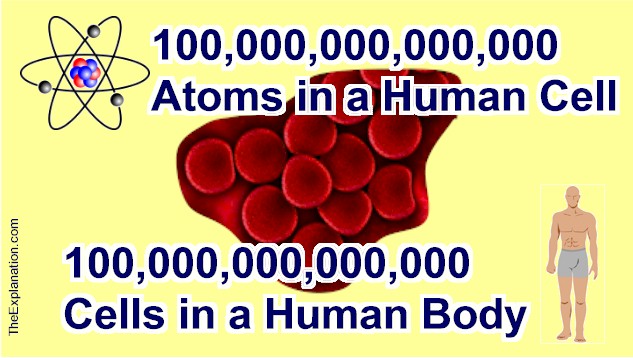 Yes, you and I are an amalgam of these billions of billions of cells working together, each with its own cell life cycle integrated into this massive functioning ‘human body’ we call life.

There are 100 trillion atoms in a cell and 100 trillion cells in a Human Body. All working together to make Life.

You have roughly thirty trillion red blood cells that circuit your body about every thirty seconds and renew themselves every 120 days. A simple calculation reveals that about three million red blood cells die every second of your life. That’s barely one cubic millimeter of blood, the volume of one-fiftieth of a drop of water. As Galacti says, “No need to worry.”
(chapter 7.10)

Thirty trillion red #blood #cells circuit your body about every thirty seconds and renew themselves every 120 days. What Speed! Click To Tweet

Rather, these figures tell us about the speed at which activity is taking place in our bodies and that our body activities never quit. For example, we actually lose over thirty thousand skin cells per minute.

These and other organ and tissue cells are replaced by the process of mitosis: a cell dividing into two identical daughter cells. You studied this in biology and can review it if necessary. What I want to do is mention some lesser-known cell life processes to make you aware of some of the latest discoveries.

As we noted earlier, junk DNA is anything but, and even the smallest detail has its importance. For instance, in cells that have a nucleus, it’s not just the presence of a nucleus with its organelles and DNA that is vital.

#Junk #DNA is anything but junk, even the smallest detail has its importance. Over 80% of DNA is essential for transcription. Click To Tweet

Its shape and size, which are managed by the lamina—the meshwork of filament proteins that support the inner membrane of the nucleus—can tell much about our health. An abormally sized or shaped nucleus is a possible indicator of sickness. Cell shape and size is overseen by the lamina, filaments that support the inner cellular membrane.

It is also vital to know the anatomy of the cell nucleus. Notice the rough endoplasmic reticulum (ER) with the ribosomes on the diagram below, those factories where DNA reproduction takes place. the rough endoplasmic reticulum (ER) with the ribosomes, the factories where DNA reproduction takes place. This is the continuity of the outer nuclear membrane that, via the thousands of nuclear pores, is in direct contact with the inner nuclear membrane surrounding the nucleus.

In other words, the nucleus doesn’t just float around the interior of a cell because the ER fully encases it. When we talk about mitosis, the process by which cells reproduce, the ER is especially important in the separation of chromosomes, which is part of dividing the single cell into two identical daughter cells in the mitosis process.

Most explanations indicate that the nuclear envelope disintegrates during mitosis. In fact, it is absorbed by the ER, and both totally transform to become the tubules that join end to end and form the long spindles that attach to the centrioles, the two end-zone points.

At the center of the cell a pair of spindles joins to identical halves of each chromosome that will form the two daughter cells. The point is that the organelles, the innards of the cell, have precise roles to play and these roles change depending on the process.

Mitosis with a ‘walking protein’ walking along a spindle carrying the chromosome to the ‘end-zone’ centriole.

The deeper picture is that machine proteins are actually walking and carrying the chromosomes along the tubules to their destination! This is pictured by what I’ll call the “protein walking machine” on the top right spindle in the diagram. Yes, with powerful microscopes we can now witness these protein walking machines.

Machine proteins walking and carrying chromosomes
along the tubules to the centrioles during mitosis, the dividing of a cell in two.

Above is an amazing real-life animated video of this process. As the walking proteins proceed to their end-zone destination, the already-positioned sections of the spindle break apart and ready themselves to reform the nuclear membranes and the ER of the two new nuclei.

Generally, DNA that measures 1.8 meters (5 feet) is unfolded. This is represented by the blue squiggly line in the cellular lamina diagram, the first diagram in this post. DNA is compacted into the familiar twenty-three pairs of tightly packed chromosomes for only a short period during the mitosis process.

We now understand and can record this compacting process. You can see videos on the ‘packaging’ process below as part of The Explanation blog bonus.

Imagine duplicating and verifying the integrity of a DNA strand that contains six billion nucleotides (two strands of three billion) in a confined space of ten microns, (the size of dust or pollen) and then compressing the nucleotides into forty-six identical packages, two by two, separating them into two identical cells.

Imagine duplicating a #DNA strand containing six billion #nucleotides in a confined space the size of a #pollen grain. Click To Tweet

This is equivalent to a strand of 3 billion pairs of beads, 1.8 kilometers long, being duplicated, verified, and compacted inside a soccer ball. Think about trying to do that in sixty minutes without one error and without getting anything entangled.

This information about life at the cellular and DNA level is extremely enlightening, and as we explore it deeper and deeper—or we could say smaller and smaller—it gets even more mysterious. For this reason we’re taking a time-out to remember why we’re broaching this subject of human life.

It’s not just about DNA, genes, organelles, cells, and all those chemical and biological terms that the average person hasn’t really mastered.

Frankly, out of the entire book, this chapter was the most difficult one to write not only because of its complex nature, but also because, as with chapter 9 about the mind, science is abuzz with new discoveries that are turning old ideas on their heads.

Open-minded scientists are beginning to speak out about how much more there is to life than biology. Taking the five basic elements and creating an environment where they can come together to form a molecular ensemble is an infinitesimal part of real life.

The role of The Explanation is to go beyond chemistry and biology and take you both below and above that to reveal how these and other sciences are tools that reveal the bigger picture. In the next sections, we’ll look at apoptosis, stem cells, transposable elements, and epigenetics. These are four areas known by science, but each domain is a science in itself that is only partially understood, each presenting enigmas of its own.

Dictionaries can give a clear, short definition of each discipline so that you can understand what area of life each deals with. But what might appear simple and separate is in reality known to be both complex and at the same time a well-oiled, flawlessly functioning process.

I suggest to you that as we broach these four processes of apoptosis, stem cells, transposable elements, and epigenetics, along with the myriad of other biological body and brain systems, we consider them globally as life. When we do this, the flawless puzzle gets interesting because that’s where we want peace and prosperity.

That’s what The Explanation is all about. It’s not the chemical elements; cells; processes; organs; or even the whole body, brain, and mind; it’s the Inventory of the Universe.

To be candid with you, at the outset of my writing adventure, I had no intention of writing Inventory and its upcoming sister book, Audit of the Universe, in such a challenging way. Rather, I was just going to dive in and directly answer the equally consuming question: “How would you bring peace and prosperity to Earth?”

But you know, you really can’t have peace of mind and body if something is going wrong with apoptosis, stem cells, transposable elements, and epigenetics and other aspects of the universe.

That might sound a bit preposterous, but one bent cog can bring a precision timepiece to a halt. Similarly, a minute mechanical failure can shut down a huge printing press or factory or cause havoc in a large-scale operation.

Apoptosis, stem cells, transposable elements, and epigenetics are important, but they are only the cogs in the largescale operation. I would like you to see them as part of the universe, part of the whole. Each of these is unique, and all we know about them beyond that is what each process does.

They’re totally different, calling on different proteins and using dozens and even hundreds of diverse pathways to perform their functions, but all four are part of the big-picture universe.

This post is an excerpt from chapter 7.10 of Inventory of the Universe.

Below is a video that shows how the DNA strand with the ‘blue’ chromosome (the first diagram in this post) folds up (packaging) in preparation of mitosis, the splitting of the cell to form two daughter cells.

Frankly, this next video is more complicated, going to a deeper level. With regard to The Explanation, it is interesting to watch simply to comprehend the concept of processes within processes. This video discusses DNA packaging and implications of various promoters and enhancers or ‘other parts’ of the DNA chain that influence transcription and packaging. Biological life is not as straightforward and understood as some would have us believe.

Since you read all the way to here… you liked it. Please use the Social Network links just below to share this information from The Explanation, Cells … About 100 trillion of them and we have a Human Body