Stem Cells and Differentiation: the Core of your Body’s 24/7/365 Regeneration Process 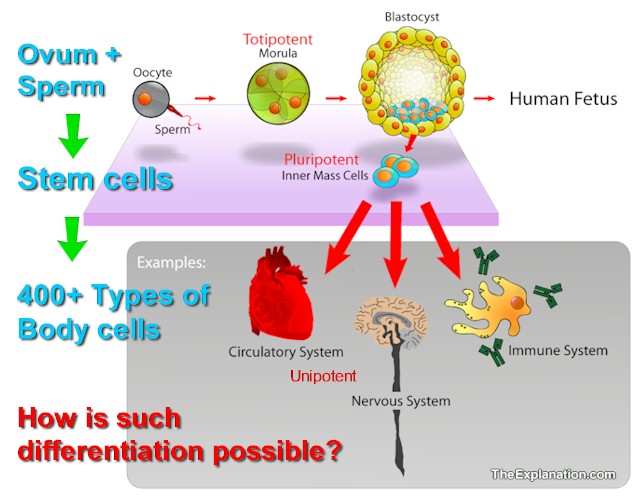 Stem Cells: Life starts with one cell and this one cell develops into 400+ different types of cells: Skin, gut, brain … and these stem cells do it all your life. They do it just in time … every time. The fertilized ovum divides and produces ‘stem cells’. Each of these stem cells can produce various types of other body cells hence they are pluripotent cells. Together the stem cells produce the 400+ types of unipotent cells which compose our bodies. This amazing process is called ‘differentiation’.

As we discuss stem cells and dissect pieces of the puzzle like DNA, proteins, and apoptosis, let’s remember that the focus is on Life with a capital L. Revisiting the fetus in the womb, let’s think about the fact that just one fertilized ovum cell multiplies into about fifty trillion cells nine months later and into 100 trillion as an adult.
(Inventory of the Universe, chapter 7.12)


From that original single cell, toward the end of pregnancy, will come the phenomenal production of 250,000 neuron cells per minute, readying the fetal brain’s synapses for the multitudinous connections it will materialize after birth.

A few days after the original fertilized cell begins to multiply, it is impossible to differentiate a fish embryo from a human embryo, let alone to distinguish which cells will become the bone and which will be the skin.

This latter phenomenon, differentiation, is when a master cell called a stem cell actually produces many different types of cells. Stem cells in the brain can produce skin or muscle cells that are genetically identical but have their different, distinct functions.

Bone marrow stem cells can generate or regenerate liver and nerve cells in cases of injury.

Stem cells were discovered in 1978, but it wasn’t until the turn of the century that scientists realized they could manipulate stem cells by changing their environment to differentiate them into other cells. “This has tremendous implications for health as well as ethics,” Galacti says.

That’s true. But the question we want to ask is this: how can one fertilized cell know how to become which one of the approximately four hundred diverse cell types we have in our bodies?

How can one fertilized cell know how to become which one of the approximate four hundred diverse cell types we have in our bodies? Click To Tweet

Stem cells are the body’s in-house physicians, dividing as frequently as needed to repair organs. They can become muscle cells to repair your torn hamstring or brain cells or red blood cells. Furthermore, stem cells have a dual function that no other cells have. Think of them as sleeper cells, neutral without any specific function, waiting until DNA signals them to divide, sometimes after long dormant periods. They also become specialists under certain conditions, for example, dividing at a furious rate and as frequently as needed to heal bone marrow or gut tissue.

Alternatively, they can be called into action in extreme cases, like repairing heart tissue. We wonder, as we think about stem cells becoming red blood cells to be pumped throughout the body, why no one understands how stem cells become these various types of body cells.

Moreover, we remember that some cells can’t divide because they don’t possess nuclei. Red blood cells are the prime example. Without the stem cells, and the DNA and genome that code for them, humans would have no capacity to replenish their blood supply.

Without stem cells plus the DNA and genome that code for red blood cells, humans would have no capacity to replenish their blood supply. Click To Tweet

As we look at images of blood, the atmosphere, and stars, we realize once again the vital role of each of these components of the universe; cell division ensures that we are here, living, breathing, and walking. It takes more than blood to make a human, and yet, looking at the red blood cell, we think about human life and life itself.

Move our hands, prick our fingers, or breathe, and we know that cell processes and the elemental atoms in DNA are at work right now, as are the vital elements of life, including the oxygen we breathe. The question is how.

Are genes the answer?

This post is an excerpt from chapter 7.12 of Inventory of the Universe.

Below is an instructive video about stem cells. Each human being composed of trillions of cells starts as just one fertilized cell, the zygote. That cell contains all the information allowing it to split and multiply into the multitude of ‘parts’ of the body.

Sometimes we need to ‘step back’ and have a ‘deep think’ about the incredibly complex processes that turn into you and me and billions of others … each of us from one single cell. We could go on and ask the question: what’s the point of human life? That is the question. Stay tuned for the answer.

Since you read all the way to here… you liked it. Please use the Social Network links just below to share this information from The Explanation, Stem Cells and Differentiation: the Core of your Body’s 24/7/365 Regeneration Process