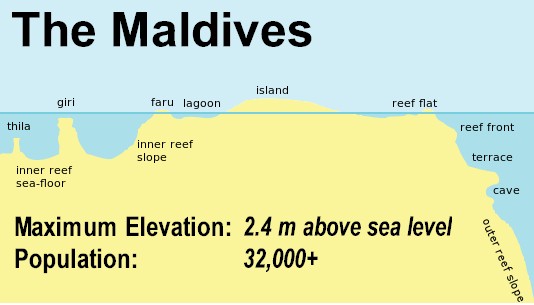 Climate change, temperature change that is going on now, is not just a remote issue. Right now it is affecting where people live and work. Their very livelihoods and existence will be at stake. Change causing peril in The Maldives: Paradise. The highest point in the country is just 2.4 m above sea level. What happens when?…

Welcome to Maldives, a tiny island nation you never think about…the president of that country is considering resettling his people in other countries, and is ‘house-hunting’ internationally because of rising ocean levels and increased pollution. The highest point in the country is in the Addu Atoll, it’s 2.4 m (yes, just short of the tallest basketball player, Paul Sturgess at 2.34 m) and the Atoll is home to over 32.000 people. Galacti, our omnipresent roving reporter says.

These small island nations are tropical, poetic, romantic, and vulnerable, folks. Fifty small island nations such as the Maldives could fully disappear in twenty to thirty years from the time of this writing. Imagine, whole islands where populations have lived a risky existence for centuries suddenly vanishing from the face of the earth.  Even people who still have a nation are forced to flee in search of safety, security, and family.  Look at these people … they won’t give you a good review of their part of this property.’

We can see this in the face of a woman in Bangladesh or India or Indonesia or even New Orleans post-Hurricane Katrina, a woman affected by the global sweep of a cyclone that makes landfall.  Rising ocean temperatures in the Atlantic Ocean and Gulf of Mexico, in the Indian Ocean, mean increased storms: as the water temperature increases, the wind velocity of a storm passing over the Indian Ocean increases.

In the direct path of the flood and storm, the woman we have just met grabs her children and flees her home, a wooden homestead with a blue-tiled roof or perhaps a modern American home, but the current snatches her children away to be lost forever. Now, living in a refugee shack near the railroad in Dhaka, Bangladesh or in a FEMA trailer in New Orleans or even temporarily in the Superdome in Texas, these women struggle to remain calm, weeping, covering their faces as they speak about their experience.

Three hundred and fifty Yup’ik Eskimos live in the village of Newtok in Alaska, where massive flooding threatens to displace them and others from their ancestral homes. It’s the same region where the aerial photo of an unusually clear Alaska is taken and Newtok itself is completely clear.  (Scientists estimate that 180 Native Alaskan villages are vulnerable.)  The state has warmed twice as fast as the rest of North America within the time-span of 1958-2013.

Unfortunately, situations where climate change comes directly into play are more and more frequent. What about the planetary response?

Extreme weather is not a reality yet, however, there are ‘black swan’ or unexpected events linked to climate change.  A team of climatologists uses the satellite data we gathered on the weather, as well as past data on bizarre weather patterns, to create a ‘global hotspot’ map for weather.  The scientists use ‘pop-ups’ at each location—mini-movies that tell the story of each, such as the elderly people in the 2003 European heatwave.  Other stories that have a medium to high correlation with climate change:

‘If the storms and floods and wildfires don’t captivate your attention, then disease might,’ Galacti says. ‘Under real estate law I am required to disclose all health hazards on the property, which is what I have been doing.  We’re in the Sahel in Africa where they didn’t have a good inspection, and they have been suffering for decades, even centuries, ever since, but it is their home.’

Imagine years with no rain, in the Sahel or the sub-Saharan part of Africa as well as East Africa in which drought has been trending since the 1970s with diminishing rainfall over the last 20 years.  This is of great concern as it affects pastures to maize and ultimately the impoverished populations of those regions.  This drought is not just in sub-Saharan Africa, it’s in Russia, where there were droughts in 2010, 2012 and 2014. Beginning 2015, although there is a minor improvement in drought conditions, the British Isles showed some drought intensification.

In Asia, drought continues to be focused around Mongolia and northern India and In Australia, drought conditions remained relatively constant with some drought intensification in the interior of the continent.  Fire danger continues to be high across New Zealand where water storage continued to fall, particularly on the South Island where drought has been declared.

Several women living in a camp or in a village in the Sahel are concerned for the moment with the stresses of drought on their own country and region.  International aid officials onsite share the women’s concerns, since drought has been linked to meningitis epidemics as well as outbreaks of diarrhea in Sub-Saharan Africa.  What connection does drought have with disease?   Epidemics of meningitis happen more quickly in dry conditions because mosquitoes are fewer, which means that fewer people contract and become immune to the disease, thus producing more susceptible hosts.

Meningitis is spread person-to-person; however, drought dust storms can carry the virus and kill 250,000 people every year.  The dust seeps in and gets in the blood, carrying the virus along.  As for diarrhea, unlike mosquitoes, flies multiply faster in drought conditions and carry diarrhea, especially in countries with poor sanitation management where ‘pit toilets’ are left uncovered.

‘Poor plumbing is a big issue,’ Galacti comments. ‘So are the flies.’

Besides the spread of viral meningitis in sub-Saharan Africa due to drought, other diseases have found a breeding ground because of climate change.   For example, in Europe in 2003, extreme heat caused circulatory diseases and aggravated respiratory ailments, to which children and the elderly are susceptible.  Another effect of heat increase is air pollution from pollens and industrial pollutants.

On the surface the African woman in agony because of meningitis and the elderly grand-mere in Paris have nothing in common, except the weather.  Epidemiologists and climatologists apply their minds to discerning patterns in disease associated with weather.

On the ground, Les Medecins sans Frontiers, the WHO or the Red Cross treat patients in international clinics and refugee camps. A parade of diseases pass through: tropical illnesses such as dengue fever, Lyme disease, tick-borne encephalitis, Mediterranean spotted fever, diarrhea … human suffering that scientists believe is linked to weather changes.

For example, in areas with record rainfall and flooding, malaria spreads faster because mosquitoes breed more. Lyme disease is rising in areas such as the northern US, as the extension of hotter weather prolongs the active season for disease-carrying ticks that also spread encephalitis and Mediterranean spotted fever. The global health risks are real in this ‘Earth property’.

Fortunately, there are solutions being proposed, which we shall discuss at a future time. That said the question is: Is climate change really happening? Has mankind had an impact by his behavior on Earth, and if yes, ultimately, what is mankind doing to right the situation? Is the proverbial glass getting fuller or emptier?

Stay in touch, join The Explanation mailing list in the right margin, add your comments below, there’s much more to come.

Since you read all the way to here… you liked it. Please use the Social Network links just below to share this information from The Explanation, Climate Change: Reality or Hoax? Sweet Victory or Defeat?