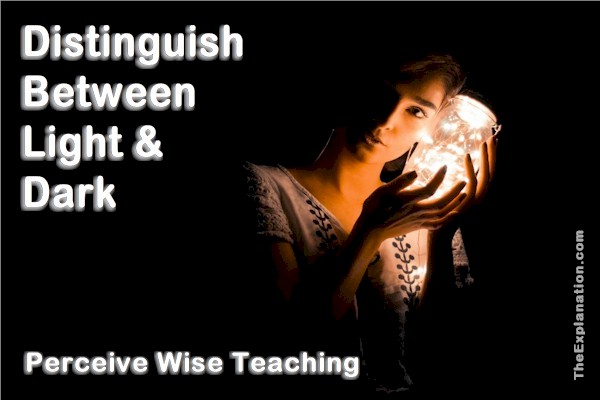 Distinguish between Light and Dark is to perceive wise teaching.

In Genesis 1:4, the English translation obscures another differentiation by omitting not once, but twice, a Biblical Hebrew word. Using the Biblical Hebrew word בֵּ֥ין (ben H996) reinforces the dividing of light and dark pronounced bain meaning between elsewhere, also translated asunder.

Practice makes perfect. Do this yourself.

Here’s the Biblical Hebrew for between. Notice the Interlinear goes a little further with the translations a space between.

בֵּין bêyn bane; (sometimes in the plural masculine or feminine); properly, the constructive form of an otherwise unused noun from H995 (בִּין); a distinction; but used only as a preposition, between (repeated before each noun, often with other particles); also as a conjunction, either…or:

As with the word divided light from dark which we saw in the last lesson, between, H996, is also translated asunder. Gen. 1:4 gives us a double dose of the walled partition to reinforce this complete separation of light and dark.

The story of Elijah and Elisha highlights the abrupt break. One instant, the two men are walking along chatting normally. Then, suddenly, out-of-nowhere appears this chariot of fire and whisks Elijah high into the sky. That’s another story. Here I want you to understand the absolute separation. God split them apart definitively, as the context tells us.

And it came to pass, as they still went on, and talked, that, behold, there appeared a chariot of fire, and horses of fire, and parted them both asunder (H996); and Elijah went up by a whirlwind into heaven.

While reading the KJV translations for H996, you noticed the words among and within. Wow, those appear to be the opposite of divided, asunder. Indeed, they are. How can one Hebrew word mean the same AND its opposite? I will not answer that now, but it is Key 2 to master Biblical Hebrew. An important key that we will learn in just a couple of lessons. Hang on.

Note the information in H996, it derives from H995. These two words have a connection, so let’s look at their relationship. We will learn an additional side of this concept of divided and separation.

As Strong says, H995 refers generally to mental understanding. The ability to separate understanding from misunderstanding. It is constructive to distinguish between correct and incorrect eloquence, information, instruction. Notice, I’m just taking the KJV translations eloquent, inform and instruct.

To make it contemporary, it reminds me of differentiating between real and fake news. There’s light news and dark news.

Take other translations for H995 like teaching and wisdom. Immediately you see the bright and somber sides. We want to make sure we are rightly dividing the truth, the wise teaching of the Word of God, (2 Timothy 2:15).

Rightly dividing the word of truth. Between compares to dissecting with a straight cut.

Look at the Greek for dividing, It is G3718, make a straight cut, to dissect. Check G5114, as if by a single stroke; rather than repeated blows like hacking. It means a sharp and definitive cutting apart, into two separate parts.

I’ll give you a brief hint as to the spiritual meaning of God divided light from dark in Genesis. The counterpart is in the New Testament book of John when God sent Jesus, the spiritual Light, into a dark, twisted, ignorant world, to spread the truth, the Light of God. Christ’s First Coming thrust Light into the dark. “And the light shines in darkness; and the darkness comprehended it not,” (John 1:5). That’s another exciting story. When God divided light from dark in Genesis, He foretold the Gospel story.

The Biblical Hebrew of Gen. 1:4 reveals there’s a space between light and dark. They don’t touch or blend into each other. There isn’t the day twilighting through evening into night. Of course, that’s what happens every 24 hours with morning and evening. But, in Biblical terms, light and darkness are two unique entities, separated by an insurmountable gap.

Acts 26:18 To open their eyes, and to turn them from darkness to light, and from the power of Satan to God, that they may receive forgiveness of sins, and inheritance among them which are sanctified by faith that is in me.

Ephesians 5:8 For you were sometimes darkness, but now are you light in the Lord: walk as children of light:

Romans 13:12 The night is far spent, the day is at hand: let us therefore cast off the works of darkness, and let us put on the armour of light.

Do you see the complete separation between light and dark?

Since you read all the way to here… you liked it. Please use the Social Network links just below to share this information from The Explanation, Distinguish Between Light and Dark. Perceive Wise Teaching