Experiential Knowledge or Religious Beliefs, which shall it be? 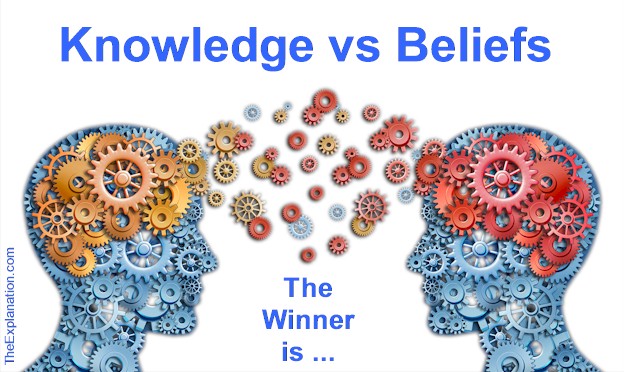 One of the readers of The Explanation commented on one of the posts:

Knowledge is experiential. Religion is based on beliefs. Beliefs are imagination, theory, potentiality. Belief is not knowledge until it is experienced… Knowledge is experiential. Religion is based on beliefs. Is there a winner? Or are there other vital questions hidden by such a debate?

Experiential knowledge or knowledge gained through experience as opposed to belief. That is the heart of a comment and question from a reader. Let’s take a closer look.

Many religious people express their beliefs as truth and that they “know it to be true”. This is purely brainwashing, as we are not born with religious beliefs; they are “passed” on from others. That’s not to get into the fear and controlling aspects of many belief systems. Thus I would say peace and positive growth only occurs when we pass along experiential knowledge. It is what it is.

I would say that it is quite clear on which side of the fence the author of this comment stands. What tends to happen, and has happened here, is ‘taking sides’ and pitting one side (experiential knowledge) against the other (religious beliefs).

It is the vocation of The Explanation to not get involved in ‘taking sides’ or, to put it another way, debates. This is not out of a desire to not participate or to not answer questions and objections. It is, however, a way of staying out of the tit-for-tat, argument-against-argument, boxing matches that tend to punctuate and entertain such important subjects.

Yes, both experiential knowledge and religious beliefs are very important subjects. They characterize vast segments of the world’s population and are both front and centre in the conflict of believers and non-believers.

The Explanation will answer questions about both these phenomena … in due time.

A wise man once said, ‘That which I see not … teach thou me’.

The point being that before we can get into experiential knowledge and religious beliefs we have to understand the big picture. That might sound like a cop-out but when you go into a forest to ‘thin it out’ — as do well-trained foresters, they must understand the overall forest and how the trees function one in relation to the other. There are group dynamics and you can’t just go in and ‘cut every third tree down’ for example. You have to understand the ‘context’ … all the context … before a forester can prune back or uproot a tree.

What is the ‘bigger picture’?

Here are the bigger questions, the ones people don’t ask, the one’s The Explanation feels necessitate addressing:

The Explanation dares to ask the ‘forest questions’ … those that give the context. To be direct, such questions cannot be answered in a ‘comment’ just like a forest doesn’t ‘appear’ overnight. It takes time and development.

Questions pitting Knowledge against Beliefs or Science against Religion … if that is even the way to express such debates … cannot be broached unless and until the overall context is established.

The Explanation is laying out the groundwork in two books: Inventory of the Universe (which you can purchase at Amazon, download for free or read online) and Audit of the Universe which is still being finalized. Then we begin to reveal the forest and the trees in the third book, Origin of the Universe.

To ‘speed things up’ we will be starting an online video course at the beginning of 2017 that will get into the ‘forest questions’ above. In fact, the first question we will deal with is the ‘origin of all the confusion’ that exists not only regarding ‘knowledge vs. beliefs’ but the general confusion that surrounds most if not all the major questions we have about ‘Life’ today.

Stay tuned for further information about these exciting new developments of The Explanation. Sign up to receive your free invitation to the new video course … you will be positively surprised by what we’ll be offering you.

Since you read all the way to here… you liked it. Please use the Social Network links just below to share this information from The Explanation, Experiential Knowledge or Religious Beliefs, which shall it be?