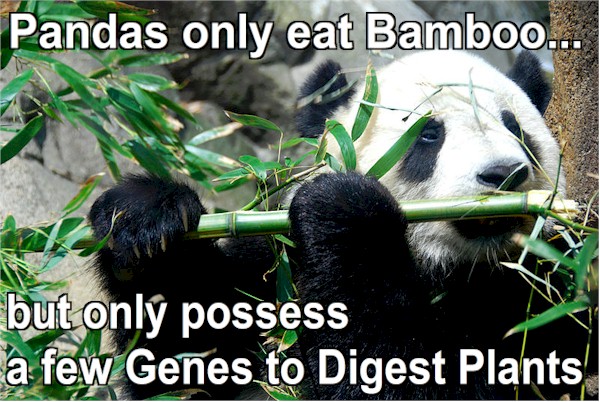 Animals can be cuddly or deadly, tiny or hug, gentle or fierce but often they hide unbelievable innate qualities that we don’t suspect or even imagine. Here are some mind-boggling characteristics of amazing fauna. Pandas only eat bamboo, but their digestive system has few genes for digesting plants. A paradox. Image credit

We go to a zoo to visit amazing fauna for pleasure and amusement. Kids are mesmerized by animal hi-jinks, but did you know that some of the most well-know—and lesser or even unknown—species function with unexpected processes in their bodies.

Some of these processes are so ‘different’ it behooves us to ask… why would such a strange, even contradictory, technique ever have taken place. Take the cuddly (at least when you’re looking at it… maybe less so if it were holding you) Giant Panda.

The Explanation takes a look at these ‘different creatures’ with paradoxical systems that are out of the ordinary. Why? Well, we’re looking for an explanation… we want to know how this came about. It’s a piece of the puzzle. Just because it seems ‘contradictory’ or because we don’t have an idea doesn’t mean there isn’t an answer.

The Panda is actually carnivorous… but doesn’t realize it. Its intestinal flora is really designed to digest meat and only a little vegetal material. In fact, it only digests 17% of its daily portion of about 12.5 kilos of bamboo. You and I would probably have a hard time imaging even eating bamboo. At the research centre in Chengdu, studies showed that Pandas don’t have any of the genes for digesting plants.

I’m not a scientist and I don’t know which genes digest plants and which digest meat. And frankly, that’s not the point. Science admits we have a ‘contradiction here that’s what’s interesting. It also goes on to say, ‘the Panda became vegetarian two million years ago, this species finds itself in an evolutionary dead-end that can only lead to its disappearance.

Two million years in comparison to universal time of 13.8 billion is indeed not much, but, taken absolutely from a human point of view 2 million years isn’t bad! The Explanation doesn’t get into evolutionary arguments. It just points out that we’ve got a divergent set of circumstances (flora eating and absence of flora digesting genes) here with an animal that appears to be doing well.

True, the Panda’s existence is in peril. It’s even the logo of the World Wildlife Fund (WWF). But it’s peril has nothing to do with its eating habits… it has to do with what man has done to this amazing fauna.

These fish can reach 1000 kg in weight and have their dorsal fin confounded with that of a shark are amazing fauna. A recent discovery is that they are warm-blooded. Its temperature remains 5° C superior to the surrounding water. For the time-being it is the only homothermic fish, meaning it has a constant and relatively high internal temperature. In this characteristic it is like mammals, you and I.

According to researchers at the National Ocean and Atmospheric Administration (NOAA), this high temperature, by accelerating the metabolism of this predator fish, makes it more reactive and rapid.

Not only is it warm-blooded, but it has another innovation in its gills

Wegner (a biologist at NOAA) realized the opah was unusual when a coauthor of the study, biologist Owyn Snodgrass, collected a sample of its gill tissue. Wegner recognized an unusual design: Blood vessels that carry warm blood into the fish’s gills wind around those carrying cold blood back to the body core after absorbing oxygen from water.

“There has never been anything like this seen in a fish’s gills before,” Wegner said. “This is a cool innovation by these animals that gives them a competitive edge. The concept of counter-current heat exchange was invented in fish long before we thought of it.”

Whether it’s on earth or at sea, there are amazing fauna.

Their amazing innovations preceded what man has thought up by millions of years. In fact, some innovations man has come up with are mimicked from animals.

These technological breakthroughs and transformations are paradoxical.

Do you want The Explanation? Well, I’ll reveal it in due time… we’re still in a discovery phase. Turning over the pieces and looking at them from all angles. There’s recognition of unusual design. There’s even explanation, or should I say, various explanations, to our chagrin.

Since you read all the way to here… you liked it. Please use the Social Network links just below to share this information from The Explanation, Incredible True Facts about Amazing Fauna & their Feats