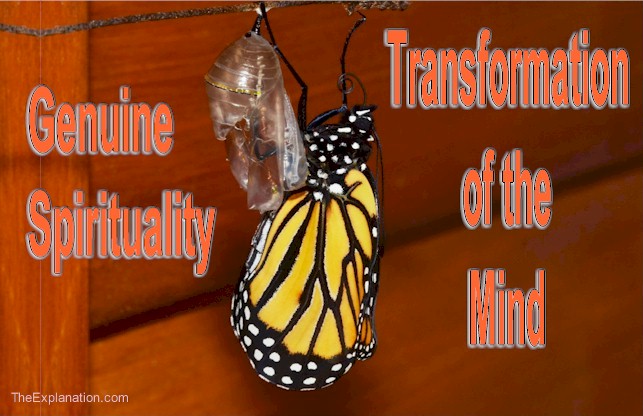 The Apostle Paul talks a lot about the maturity of genuine spirituality, “When I was a child, I spake as a child, I understood as a child, I thought as a child: but when I became a man, I put away childish things” (1 Corinthians 13:11). What are childish and mature things? What’s the difference in how a child and adult function, in how they exercise their free will choices?

Apostles and the Law of Moses

Let me give you an interesting episode in Church history to which many refer concerning choosing what and whether to keep the law of Moses (Acts 15:1, 5). It took place in Jerusalem with Paul, Barnabas, the Apostles, and the Elders; everyone was present. “There rose up certain of the sect of the Pharisees which believed,  (spiritually converted who were originally of pharisaical beliefs and practices) saying, “That it was needful to circumcise them, (new non-Jewish converts) and to command them to keep the law of Moses.  And the apostles and elders came together for to consider this matter” (Acts 15:5-6).

19  Wherefore my sentence is, that we trouble not them, which from among the Gentiles are turned to God:

20 But that we write to them, that they abstain from pollutions of idols, and from fornication, and from things strangled, and from blood.

Observance of the law of Moses was and is not necessary for the spiritually converted, except for the above provisions.

Paul and Meat offered to idols

Now, look at what Paul wrote to the Church in Corinth, composed of members supposed to possess genuine spirituality.

4 As concerning therefore the eating of those things that are offered in sacrifice to idols, we know that an idol is nothing in the world, and that there is none other God but one.

5 For though there be that are called gods, whether in heaven or in earth, (as there be gods many, and lords many,)

7 Howbeit there is not in every man that knowledge: for some with conscience of the idol to this hour eat it (meat, pollutions of idols) as a thing offered to an idol; and their conscience being weak is defiled.

9 But take heed lest by any means this liberty of yours become a stumblingblock to them that are weak.

10 For if any man see you which have knowledge sit at meat in the idol’s temple, shall not the conscience of him which is weak be emboldened to eat those things which are offered to idols;

11 And through your knowledge shall the weak brother perish, for whom Christ died?

12 But when you sin so against the brethren, and wound their weak conscience, you sin against Christ.

Paul says you can eat meat offered to idols IF you recognize idols are just called gods (verse 5) but are nothing. This is a contradiction of the events in Acts 15. How do we explain Paul’s recommendation? I will explain but let me first return to a statement I made in the last chapter that may have surprised you. Even if it didn’t, please meditate on its full meaning.

In fact, those who accept and implement this spiritual calling have also had another change of clothing. They’re ridding themselves of their fig leaves, not making their decisions based on intuition and their ideas of philosophy, science, and religion. Even the skin coats, with which God dressed them to live decent lives in the world, have given way to clothing that is not of this world.

This says that Adam and Eve’s God-given clothing (Gen. 3:21) should be replaced by other clothing. Previously I explained the clothes represent God’s law as expressed in Proverbs, in more down-to-earth language. This brings up a fundamental Biblical controversy over which basically all Christianity stumbles; the relationship of the New to the Old Covenant, including the place of the Ten Commandments and Old Testament Law in the worship of God in spirit and truth (John 4:24).

In the situation of meat offered to idols, Paul tells them to make their OWN decision based on their conscience AND that of a brother or sister with genuine spirituality. There are several circumstances here; Paul has no way of knowing about. The ministry cannot make decisions for individual cases and circumstances. It is up to the individual to decide for themselves, in prayer and meditation, what the conduct of their genuine spirituality will be.

This example helps us understand what Paul meant by “… I put away childish things.” Thinking idols are or represent God, offering them meat, and thinking that meat is somehow sacred are all childish things; Christians with genuine spirituality understand and know how to make their own decisions concerning these and many other matters.

Is circumcision necessary? That was the original request the Pharisees made to the Apostles in Acts 15. The spiritual answer is it is not necessary for Christian genuine spirituality. Paul states in Romans 2:28-29 “For he is not a Jew, which is one outwardly; neither is that circumcision, which is outward in the flesh: But he is a Jew, which is one inwardly; and circumcision is that of the heart, in the spirit (Sam: pneuma, the mind), and not in the letter; whose praise is not of men, but of God.”

But can spiritually converted individuals decide to circumcise their baby boy? Here’s what the WebMD website says about this practice.

The use of circumcision for medical or health reasons is an issue that continues to be debated. The American Academy of Pediatrics (AAP) found that the health benefits of newborn male circumcision (prevention of urinary tract infections, penile cancer, and transmission of some sexually transmitted infections, including HIV) outweigh the risks, but the benefits are not great enough to recommend universal newborn circumcision.

I’m not going to answer the question; it’s up to you to understand and apply genuine spirituality.

Christ and the Apostles do refer to the Ten Commandments, but both bring it down to Two Commandments.

36 Master, which is the great commandment in the law?

38 This is the first and great commandment.

39 And the second is like to it, you shall love your neighbour as yourself.

40 On these two commandments hang all the law and the prophets.

Is He minimizing the Ten? Absolutely not. Converted Christians with genuine spirituality understand that every single law in the Old Testament is included in the two commandments, as Christ emphasizes in verse 40. How so? Because you have to DECIDE how to apply them.

In the Old Testament, everything was spelled out, just as you do with a list of do’s and don’ts, chores, and responsibilities you hang on a refrigerator or in a kiddie classroom; take out the garbage, wash your hand, brush your teeth, put away your books.

When you grow up, bye-bye to that kind of list, to childish things, you become a wo/man and make your own decisions. Do you still brush your teeth, put out the garbage, and put away your books? Of course, you do! Are the Ten Commandments still valid? Of course, they are! But for Christians with genuine spirituality, they are an integral part of the Two Commandments. Love God covers the first four, and love neighbor includes the last six. Christ elaborated on their spiritual application in His first, and probably most important teaching.

2 And he opened his mouth, and taught them, saying,

Interestingly, this is the first and only time Christ evokes the spirit, the mind in this context. Everything in genuine spirituality starts in the mind , the spirit in humans, coupled with the Holy Spirit. it’s all about transformation of the mind.

Hearken, my beloved brethren, Has not God chosen the poor (G4434, same as poor in spirit) of this world rich in faith, and heirs of the kingdom which he has promised to them that love him?

Rich in faith in God means humble in the human mind or poor in spirit. Read Matthew 5-7, the genuine spirituality attitudes: mourn, meek, righteousness, merciful, pure in heart, peacemakers, persecuted for righteousness, reviled. This is the practical application of the two great commandments and it all a state of mind.

Mature Christians, guided into spiritual reasoning by the Holy Spirit, know how to make decisions. Am I saying we can decide whether to keep the fourth Commandment, the Sabbath? No, absolutely not. Is it part of Love God? Yes, it is. But how you rest on the Sabbath is up to each Christian to decide, just as it is with meats offered to idols. It’s a question of one’s conscience concerning God. That’s spiritual maturity.

All those tricky, superficial questions come down to answering only one. Is my decision in conformity to Scripture showing love to God and love to my neighbor? 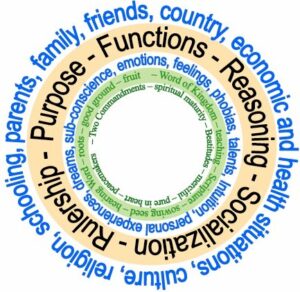 We can now add a further inner circle to our psychology of circles. It represents spiritual maturity. The experienced Christian is increasing their spiritual fruit ten, thirty, and a hundredfold. The attitudes of Matthew 5, meekness, righteousness, mercy, purity in heart, and peace, shine as God’s light through the Holy Spirit.

Why only Two Commandments? The ultimate purpose

We’ll spend eternity with God and with our neighbor. Earth is a PHYSICAL TRAINING GROUND before SPIRITUAL REALITY. In everything we do on Earth, there’s always training BEFORE we’re faced with the deep end. Sometimes a father dies prematurely, the wife, eldest son, or daughter acquires responsibility they hadn’t planned on nor been prepared for; life happens. But under normal circumstances, children should be trained for responsibilities and life.

In God’s plan, every single person who has walked the face of the Earth will go through the PHYSICAL TRAINING CAMP, and receive the opportunity of being a child donned with coats of skins, the Ten Commandments and then growing up to put on spiritual clothing, the Two Commandments. They will follow the path from childhood to adulthood, applying the two great Commandments with genuine spirituality in preparation for their eternal life. Everyone has the same opportunity; that’s God’s patience, justice, and attachment for every single human being and the transformation of their minds.

Since you read all the way to here… you liked it. Please use the Social Network links just below to share this information from The Explanation, Genuine Spirituality. From Childish to Mature Decision-Making