Not in The World = Decisive Makeover of Our Neshama & Ruach 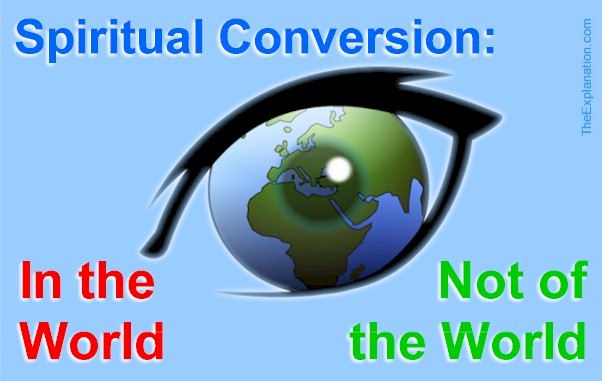 Spiritual conversion is our presence in the world but not being of the world. Total redirection of our consciousness and mind.

Let’s recapitulate. Mind-Body Problem Solved reveals the mind is a spiritual entity, by definition, separate from the physical body-brain. The Bible reveals that the ruach-mind is inseparable from a second spiritual entity, the neshama, which we’ve defined as consciousness. Every human being is endowed with both neshama-ruach, consciousness-mind. Another given is we all live IN the world.
(Mind-Body Problem Solved, Chapter 45 – Table of Contents)

When we come to spiritual conversion, the subject of this final section of the book, the Bible states,

11 And now I (Christ just before His Crucifixion) am no more in the world, but these (Christ’s disciples) are in the world, and I come to you. Holy Father, keep through your own name those whom you have given me, that they may be one, as we are.

That is one of the clearest definitions of spiritual conversion. The question is, how did this come about for the Apostles and disciples then? And how does God perform spiritual conversion now by taking people in the world and making them not of the world? Here are three images to illustrate what in the world means in practical terms. The first image is the spiritual makeup of all humans: consciousness-mind, neshama-ruach; briefly, the five elements of purpose, function, socialization, rulership, and reasoning, all coupled with the ruach-mind-power to develop and grow these qualities. The second image is composed of the interior-exterior influences each human is subject to via their heredity and environment; the nature-nurture equation.

The third image is the battle each person fights daily between the good and bad pulls and pushes within us and in society. This latter image summarizes in the world. In chapter 36, Human Reasoning, we discussed Genesis 3, when Adam and Eve made themselves aprons of fig leaves (Genesis 3:7), and God dressed them in coats of skins (Genesis 3:21). The former represents humans making their own makeshift decisions in contrast to God giving them a stable plan for living in the world outside of the Garden of Eden.

Ever since humans have been torn between the fig leaves and the coats of skins. Unfortunately, humankind has donned more fig leaves; that’s in the world. And with open eyes, we should see the state of our world today. 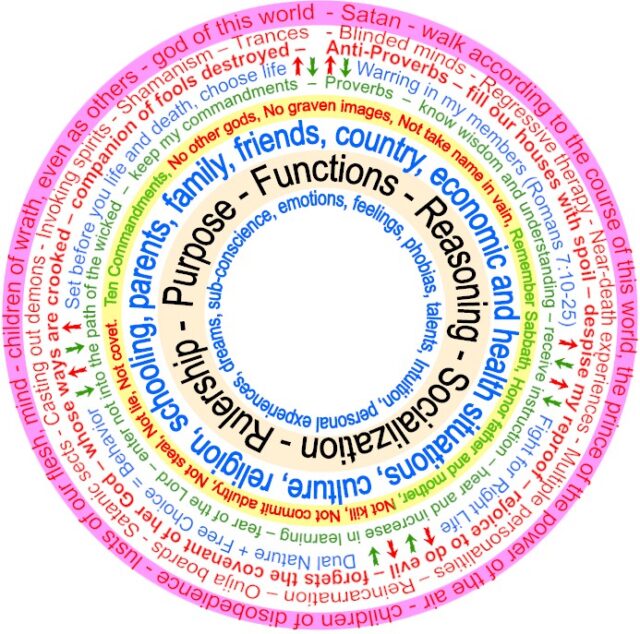 In this state of human depravation, the Father performs spiritual calling. He does it by planting seeds and watering them, giving access to His Word, the Scriptures, and a little portion of the Holy Spirit. The goal is to understand.

After spiritual calling by the Father, someone hears the Word and either responds or not. “But he that received seed into the good ground is he that hears the word, and understands it; which also bears fruit, and brings forth, some an hundredfold, some sixty, some thirty” (Mat. 13:23).

What is bears fruit? What is God’s Word coupled with the Holy Spirit supposed to help to understand? Here are the first Words of Christ in Mark.

14 Jesus came into Galilee, preaching the gospel of the kingdom of God,

To bear fruit is to believe and repent. Those are specific actions that a person God calls must understand. Believe what? Repent from what? What is the relationship between believe and repent? And, in particular, how does this move you from in the world to not of the world?

Fundamentally the existence of an all-powerful being and its coming to Earth to pay for humanity’s sins is rather crazy. Fiction tells stories of heroes who die to save others, but not for everyone, and not for their sins so that they can live forever. We have to admit the Bible account is rather bizarre and outlandish. Yet, it’s real, and there must be substantial belief to accept this fact.

Note the relationship between belief and faith. In English, faith appears stronger; the reality is they are both about conviction, and they’re of equal primacy.

πιστεύω pisteuō pist-yoo’-o; From G4102; to have faith (in upon or with respect to a person or thing) that is credit; by implication to entrust (especially one’s spiritual well being to Christ):

πίστις pistis pis’-tis; From G3982; persuasion that is credence; moral conviction (of religious truth or the truthfulness of God or a religious teacher) especially reliance upon Christ for salvation; abstractly constancy in such profession; by extension the system of religious (Gospel) truth itself:

There are dozens of verses with believe and faith; do a study at UnlockBibleMeaning.com. Strong’s emphasis of reliance on Christ for all matters of salvation is correct.

John 17:20 Neither pray I for these alone, but for them also which shall believe (G4100) on me through their word;

John 20:31 But these signs and miracles are written, that you might believe (G4100) that Jesus is the Christ, the Son of God; and that believing (G4100) you might have life through his name.

May have life through His name. During Christ’s prayer, those disciples, like us, have life; this is an additional life. Remember, God breathed the breath of liveS on the first human (Genesis 2:7). This is why neshama has multiple liveS. It’s only because God endowed us with this element; now He’s showing us how to access this new life through Christ’s name, not in the world. The first step is to believe and have faith in Christ, and all that represents, which we can’t detail here.

Now we come to the second directive by Christ as reported in Mark 1.

Repentance is much more than feeling sorry for our wrongdoing.

Or despise you the riches of his goodness and forbearance and longsuffering; not knowing that the goodness of God leads you to repentance? (G3341)

That’s God’s calling; His goodness in leading us individually to this turning point in our lives. Let’s meditate on the depth of meaning of the Greek, which like the Hebrew, reveals more than the translation.

μετανοέω metanoeō met-an-o-eh’-o; From G3326 and G3539; to think differently or afterwards that is reconsider (morally to feel compunction):

νοιέω noieō noy-eh’-o; From G3563; to exercise the mind (observe) that is (figuratively) to comprehend heed:

Go to G3563 > G1097 at UnlockBibleMeaning.com to see how relevant the mind, perception, understanding, and thinking are to repentance.

Repentance is the reversal of the mind and the way we perceive. We reconsider how and what we think. We understand differently than in the world. It involves re-arranging our consciousness. Repentance leads to us coming out of the world.

One of the five components of consciousness is how humans function. Here are the seven steps:

When this process of God’s goodness leads us to this realization and transformation of mind, one is forgiven and has their sins buried in the watery grave of baptism. That individual is still IN the world but no longer OF the world.

You can see this process impacts how a called and then spiritually converted person functions. This affects behavior concerning their purpose in life, socialization, and rulership, and since it primarily involves the mind, certainly their reasoning. All aspects of their neshama-consciousness are redirected from worldly to spiritual thinking, meditation, and decision-making.

Again the Greek for the word world-kosmos is revealing.

κόσμος kosmos kos’-mos; Probably from the base of G2865; orderly arrangement that is decoration; by implication the world (in a wide or narrow sense including its inhabitants literally or figuratively [morally]):

κοσμέω kosmeō kos-meh’-o; From G2889; to put in proper order that is decorate (literally or figuratively); specifically to snuff (a wick):

Interestingly, the word cosmetics derives from the Greek κοσμητικὴ τέχνη (“kosmetikē tekhnē”), meaning “technique of dress and ornament,” from κοσμητικός (“kosmētikos”), “skilled in ordering or arranging” and that from κόσμος (“kosmos”), meaning “order” and “ornament.” There’s a relationship between ornaments and how we order, use, or organize them. The emphasis is on the interior spiritual, not the exterior material.

3 Whose adorning (G2889 – kosmos) let it not be that outward adorning of plaiting the hair, and of wearing of gold, or of putting on of apparel;

4 But let it be the hidden man of the heart, in that which is not corruptible, even the ornament of a meek and quiet spirit (G4151 – pneuma), which is in the sight of God of great price.

We’re still in the world, here and now, as others, but we’re not OF this world (this does not mean we can’t go to the hairdresser, wear jewelry, or fine clothes); we’ve had a profound change of heart. Referring to the pneuma-spirit, the mind which is now in line with God’s way, His behavior, ethics, and justice, including our outward appearance.

In fact, those who accept and implement this calling have also had another change of clothing. They’re ridding themselves of their fig leaves, not making their decisions based on intuition and their ideas of philosophy, science, and religion. Even the skin coats, which God dressed them with to live decent lives in the world, have given way to clothing that is not of this world.

14 Stand therefore, having your loins girt about with truth, and having on the breastplate of righteousness;

15 And your feet shod with the preparation of the gospel of peace;

16 Above all, taking the shield of faith, wherewith you shall be able to quench all the fiery darts of the wicked.

17 And take the helmet of salvation, and the sword of the Spirit, which is the word of God: 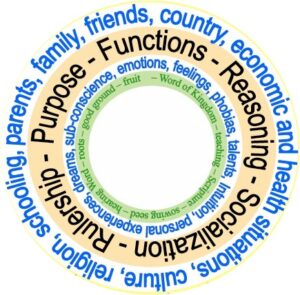 We’re still in the world but not of the world because inwardly, we’re clothed with righteousness, the gospel of peace, faith, salvation, the Holy Spirit, and the Word of God.

The outside circles in the world are still present. But we’re no longer of the world; we’ve shifted direction from the outside to the inside of the circles. The inner and outer influences on our minds align with God’s mind. Romans 12:2 says, “be not conformed to this world: but be you transformed by the renewing of your mind, that you may prove what is that good, and acceptable, and perfect, will of God.” That is living in the world but not of the world.

Since you read all the way to here… you liked it. Please use the Social Network links just below to share this information from The Explanation, Not in The World = Decisive Makeover of Our Neshama & Ruach