GMO – Giving the Plants we Eat a Helping Human Hand 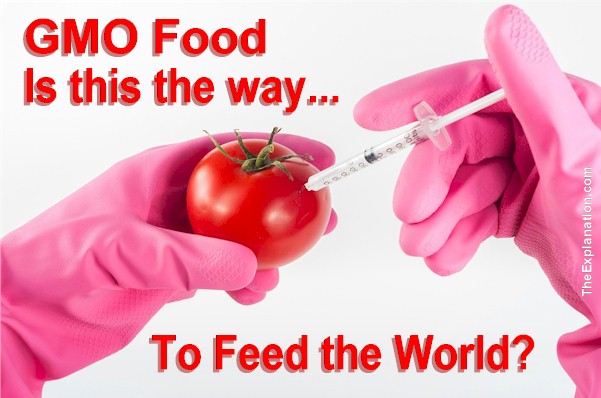 GMO – Genetically Modified Organism. Intervening in the food we eat at the gene level. Pros and Cons.

GMO Food. Is this the way we want to feed the world? Is the love of the land and agriculture only about feeding stomachs? Isn’t there much more to it than that?

The debate over genetically modified foods (GMO) has raged over the past decade. Some nations have embraced them. Some have banned them outright. Some people are violently opposed, while others are firmly in favor. Very few have no opinion at all.
(Audit of the Universe, chapter 5.3)

On the plus side, genetically modified plants let us breed or design them for human-positive qualities. A genetically modified plant can produce more food faster, resist pests without relying on poisonous sprays, survive in wider climates, and survive more diseases. Humankind has a millennia-old tradition of crossbreeding plant species for these exact characteristics and has only recently begun tinkering at the direct genetic level.

We have genetically engineered every one of our staple food crops for thousands of years. This process began with simple selection: weeding out less desirable strains while planting the more suitable. Cross-pollination and hybridization came next, with a variety of plants with the most advantageous mutations. Up to this point, where only natural reproductive methods come into play, species maintain their integrity, and those that can’t are either sterile or die out.

Then there’s the next level where human intervention is necessary: Inducing mutation via chemicals or radiation and direct genetic manipulation; this opened the door to the practice of producing true genetically modified flora.

From the first marketing of DNA modified tomatoes, in 1994, to delay their ripening, this genetic tinkering has been castigated by opponents of GMOs who cite a variety of risks and disadvantages:

At the nexus of the GMO and industrialization debate is the fact that GMO crops are part of intellectual copyright law. It creates situations where a farmer who uses GMO seeds must pay for seed every season, as opposed to natural plants where you could use the seeds produced in one planting for the next round.

It is putting small farmers, especially in more impoverished areas of Asia and Africa, in jeopardy as they cannot afford to buy seed for the next growing season. Agriculture employs 40% of the world’s population and even up to 75% in poorer nations. GMOs are throwing people off their land with devastating consequences.

GMO supporters often point out that most of the objections to GMOs are about what could happen as opposed to what has been demonstrated. They counter with some possibilities for GMO crops as our mastery of this technology continues to improve.

We could develop crops to survive in deserts and high-salinity areas, reclaiming land lost to earlier mistakes. Even deeper into science fiction are plants designed to be edible vaccines or treatments for illness. We are also now working to develop plants to treat cholera, AIDS, and chronic diarrhea.

Pros of GMOs: Crops designed: To survive in deserts and high-salinity areas, be edible vaccines or treatments for illness such as cholera, AIDS and chronic diarrhea. Click To Tweet

The debate will go on regarding the pros and cons. Is our proverbial glass of healthy, vibrant, and bio-diverse flora getting fuller or emptier?

The Creative Destruction of Slash-and-Burn Farming

Slash-and-burn is a method of farming by which you gain arable land by destroying the surrounding rainforest. The process begins with cutting down vegetation in an area, sometimes via clear-cutting, simply felling everything in sight, and in other cases leaving only food-bearing trees alive. You then let the downed vegetation dry until just before the rainiest part of the season; then, you burn the tinder-dry leaves and twigs.

This burning provides several immediate benefits. The smoke drives away or kills pests and vermin that would otherwise prey on the crop. The ashes are an excellent fertilizer for the first few growing seasons, after which you abandon the plot to slash and burn another piece of rainforest.

In sustainable slash-and-burn farms, you cycle through several plots of land over the decades. Once vegetation on a burned plot has grown to a point, it can produce enough ash; you return to the previously slashed-and-burned area instead of cutting down more rainforest. However, this sustainable cycle is not always adopted.

In regions where economies are tight, and an autocratic government controls the land, farmers continue slashing and burning into the rainforest. At the same time, previously cleared plots are abandoned or converted to urban areas. Even with a sustainable approach, the process contributes to deforestation, accelerated erosion, and loss of biodiversity.

The QSMAS (Quesungual Slash and Mulch Agroforestry System) is a variation of slash-and-burn applied by researchers in South, and Central America offers a compromise between the economic benefits of slash-and-burn and a balanced approach. Also called slash-and-mulch, you begin the process with a developed tract of secondary forest in which you sow pioneer crops like sorghum or beans that thrive in such an environment.

Once seedlings appear, you practice selective slashing of low-value shrubs and prune any food-bearing trees. This slash creates a layer of decomposing plant matter that mulches to fertilize new plants. The crops grow among high-value timber and fruit trees left alive. After the first growing season, your plot is ready for higher-yield, more fragile crops like maize.

The QSMAS program alone has produced food security for thousands of small-scale farmers in developing nations, increased the average value of maize and bean production by 81%, and recovered local biodiversity in approximately 60,000 hectares of secondary forest. That’s a land area about the size of Norway.

Some other creative farming solutions we have adopted include vertical farming in urban areas, the organic food movement, and locavores—all moves to re-integrate, producing food with those who consume it.

Planting Roots, But How Deep?

Galacti gestures at the plants nearby, indicating without a word that we should consider the complex system of plant life throughout the world. “A healthy system is sustainable and balanced, needing little or no outside interference to continue thriving.

I ask you: is this system healthy? Will it continue to provide for humankind’s needs in the time of your children and grandchildren? Is it producing plentiful, nutritious, tasty food as it did for you in your youth? Or is the world heading for a time of less abundance, diversity, and nutrition available in its food basket?”

What’s the answer? Are we tipping the balance to a fuller or an emptier healthy pantry?

This blog post is an excerpt from chapter 5.3 of Audit of the Universe.

Since you read all the way to here… you liked it. Please use the Social Network links just below to share this information from The Explanation, GMO – Giving the Plants we Eat a Helping Human Hand