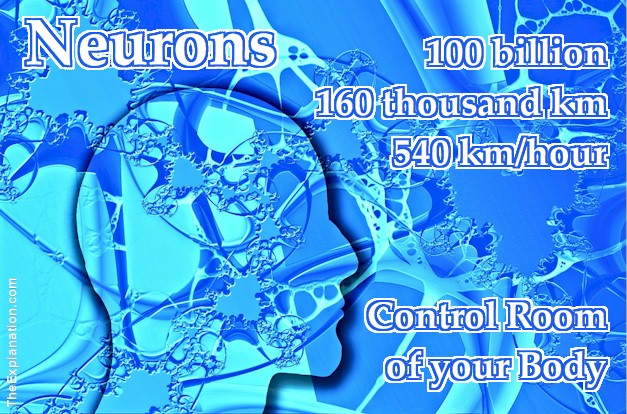 Your Neurons, with their axon extensions measure 160,000 km, communicate millions of signals simultaneously and continually to make your body function correctly.

Your 100 billion neurons, with their axon extensions measure 160,000 km, communicate millions of signals simultaneously and continually at 540km/hr to make your body function correctly.

We’re going to observe my adult brain with its neurons more globally because, as we perceive on the unique scanner image, the brain truly functions as one unit.

The brain imaging scan shows us 500 billion glial cells. The glia provide the structure that keeps the neurons connected. It also directs nutrients, water, and chemicals as well as evacuating all the waste to keep the nerve cells running smoothly. This is a miniature cycle that is repeated innumerable times.

My neurons may look like traffic junctions, and that is an apt comparison. The 100 billion neurons in my brain, which can come in over ten thousand flavors or varieties, process and transmit information throughout my body. At any given moment during this tour, my brain function depends on neurons of all shapes, sizes, and types.

These include sensory neurons that handle eyesight, taste, and smell; interneurons, which communicate to other nerve cells; and motor neurons, which initiate my muscles to, say, move and crawl into the MRI chamber. Each of the ten thousand varieties of neurons has specialized characteristics in performing its role.

Galacti points out that most neurons on the scan share basic features, such as the tree-branch-like structures called dendrites. The dendrites function as the “inbox” of the neuron, while the axon, which is the transmitter, functions on “send.”

The axon, measuring up to one meter in length, ends in wiry extensions called axon terminals, which send information to dendrites of other neurons, close by and further along the nervous system. In a young adult’s brain, this grid of axons, laid out end to end, measures 160,000 kilometers or four times the circumference of the Earth.

This is what we mean by observing the brain globally! The workings of this grid become even more complex as we study them. Like Internet servers, the axons and dendrites never physically come in contact.

Instead, they are separated by a synapse, a space measuring one ten-millionth of a millimeter. For reference, a single hair on my head is about one fifth of a millimeter thick. We ponder how miniscule a synaptic cleft—the gap between neurons—is and how important it is in brain function.

Tiny but powerful, the synapses send two types of signals that the dendrite receptors capture and process. Chemical synapses emit over a hundred identifiable types of neurotransmitters, including chemical messengers such as acetylcholine, endorphins (the feel-good hormone generated by, for example, exercise), dopamine, and amino acids such as glutamate.

Electrical synapses send electrical signals. Both kinds of information help the body and brain function in complementary roles. We think we have a general picture, especially since the scan is right in front of our eyes. In fact, synapses are involved in the very act of looking at and comprehending the scan.

However, the big picture that we’re seeing contains many pieces. For example, there are many variations: axonless, dendriteless neurons, and two axons or two dendrites that interact over a synapse.

We pause to appreciate the scale of this grid of nerve cells in the nervous system. Each of the 100 billion neuron cells in the grid possesses zero to 100,000 dendrite receptors, as well as the transmitter axons at the other end.

A display highlights the longest axon, which measures one meter from my spine to my big toe, with multiple axon terminals at the extremity near that big toe.

The scan image attempts to show the intricate chemical and electric “conversations” taking place as each neuron connects to between 5,000 and 200,000 other neurons and exchanges electrical and chemical messages via the synapses.

Picture the conversations as telegrams containing brief marching orders. They travel around this labyrinth at speeds of 540 kilometers per hour, sending information to make my body and brain work day in and day out. This process is unnoticed, invisible, and mind-boggling.

This post is an excerpt from chapter 9.3.1 of Inventory of the Universe.

This first video is short but interesting because it admits something simple but profound … we have not yet identified the connection between neuronal activity and mental activity. Science thinks it is getting closer but can it crack the code?

This 2nd video reveals the intricacy and complexity of 100 billion neurons, each connected to up to 50.000 other neurons to communicate. It says that this vast system together is at the origin of our imaginative ability. We need to think how this ‘imagination’ all came together.

Since you read all the way to here… you liked it. Please use the Social Network links just below to share this information from The Explanation, Neurons – Communication Traffic Junctions of the Nervous System