Your Brain is Multitasking 1000s of Functions Instantly 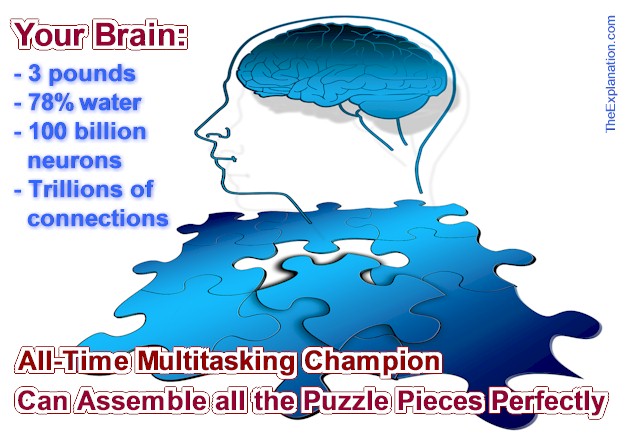 Your brain is three pounds of jelly tissue, 78% water. It is incredibly fluid and responsive, more so than the fastest Internet connection! How can this be? Your brain is three pounds of jelly tissue, 78% water. It is incredibly fluid and responsive, more so than the fastest Internet connection! How can this be?

The state-of-the-art brain imaging techniques available in this lab, including recent ones that visualize the brain in psychedelic renderings of neuronal connections, allow us to see this intricate labyrinth of axons as “neural wiring maps.”
(Inventory of the Universe, chapter 9.3.2)

There are billions of smaller connections, which Galacti reduces with a few adjustments until we see the underlying structure of neurons being activated. Whether we’re running a marathon or merely standing still in contemplation, systems of neurons handle the job.

Every time I open my mouth, millions of neurons are activated. No matter what gesture one of our group members makes, millions more neurons leap to the task. Whether one is walking, carrying a backpack, looking at a display, or noticing other people, the neurons spring to action. This network of neurons is a somatic, voluntary system that operates when you decide to take action.

Even if you are just standing and contemplating your brain, neurons are at work in the autonomic or involuntary system such as breathing, blood circulation, salivation, digestion, water flow, waste elimination, and all the other automatic systems running full time in your body. Whether we’re awake or asleep, they’re in lifelong action enabled by the neurons.

Whether we’re awake or asleep, our body systems are in lifelong action enabled by the neurons. Click To Tweet

In addition, for those of you who are contemplating everything we’ve seen so far, neurons are of course involved in your cognitive functions. This means they are involved in thinking about what you’ve learned, imagining, processing ideas, initiative taking (such as browsing the digital library of the universe and inviting others to learn more), planning, and decision making.

In other words, neurons are involved in the entire gamut of activities that we associate with the mind, although the mind is so much more.

Your brain is multitasking hundreds and thousands of functions right this moment (and every moment) without rest. In fact, your brain doesn’t even rest when you are asleep!

Your brain is multitasking hundreds and thousands of functions every moment even when you are asleep! Click To Tweet

We function better after a good night’s sleep because the brain continues to process the input received while we were awake, sifting, sorting, reinforcing what we learned and allowing us
to recall the information later: Big Bang, atmosphere, Earth’s core, wheat, animals, DNA, neurons.

To demonstrate this multitasking, we ask one of our members to have a MEG scan (short for magnetoencephalogram scan). An image of her brain is taken while she eats a pear.

All of her five senses come into play: she views the ripe, red fruit, feels the moisture on her skin, and inhales the scent before biting into the tasty fruit flesh, simultaneously listening to the crunch.

On the supersensitive scan, we see the sensory neurons recording and reporting their information, but we do not see the coordination of “intelligence,” if you will, into a total picture of the fruit.

On the supersensitive brain scan, we see the sensory neurons recording their information, but we do not see the coordination of “intelligence” Click To Tweet

We can see the neurons that connect the motor and sensory nerves, which work together. However, we can’t see on the scan that our traveling fruit-eater knows the pear is juicy, nor can we see that it is helping to ease her hunger. Her nerve system knows that she gets a piece of skin caught between her teeth, or that the skin feels shiny as she swallows it.

Each action or sense, no matter how trivial, affects our neurons and activates synapses that we can see.

All these actions (feeling hungry, holding on to the pear and waiting to dispose of it, trying to guess what time it is) are given high priority, medium priority, or low priority and are coordinated with all the other involuntary or voluntary actions taking place within our fellow traveler.

You may think the coordination of New York City or Beijing traffic is complex, but your brain is capable of integrating all the sensory information, mental processes, and motor skills you need to drive a car in rush hour and help you reach home safely.

If you are awed by a colony of weaver ants from our animal chapter coordinating to build a nest, a herd of wildebeest migrating long distances in Africa, or the vast network of the Internet with 2.5 billion people and the interconnected transmission of all the messages, email and web pages, consider that your brain’s 100 billion neurons and the routing paths for your physical and mental activities act with split-second precision and coordination.

Your brain’s 100 billion neurons and the routing paths for your physical and mental activities act with split-second precision and coordination. Click To Tweet

The gargantuan quantity of neuronal circuits for communicating information is expressed by the number 10 followed by hundreds of zeroes, a number far greater than the total sum of atoms in the Universe.

We’ve never imagined these sheer numbers of neurons or their speed, let alone the organization and coordination needed to make our body and brain run smoothly.

It’s stupefying that all the wiring and connections are overseen by your brain. Your brain is 1.4 kilograms of jelly tissue, of which 78 percent is water. It fills a space of 1,130 cubic centimeters in your skull, which is equivalent to a small balloon with a diameter of thirteen centimeters.

Imagine, right now, that 20 percent of your oxygen intake and 25 percent of your glucose consumption fuel your brain. Compare this with the size of the infrastructure and the energy input required to run the Internet, or the world’s most sophisticated supercomputer.

Pause for further thought and consider that this three pounds of jelly tissue is incredibly fluid and responsive, more so than the fastest Internet connection!

Your brain, this three pounds of jelly tissue is incredibly fluid and responsive, more so than the fastest Internet connection! Click To Tweet

This post is an excerpt from chapter 9.3.2 of Inventory of the Universe.

This video delves into the synapse of your brain … infinitely small space between neurons that transform the neuronal system into a communication network transmitting (multitasking) simultaneously vast amount of information to all parts of the body so that the somatic/voluntary (throwing a ball) and autonomic/involuntary (breathing) nerve systems function properly.

Since you read all the way to here… you liked it. Please use the Social Network links just below to share this information from The Explanation, Your Brain is Multitasking 1000s of Functions Instantly