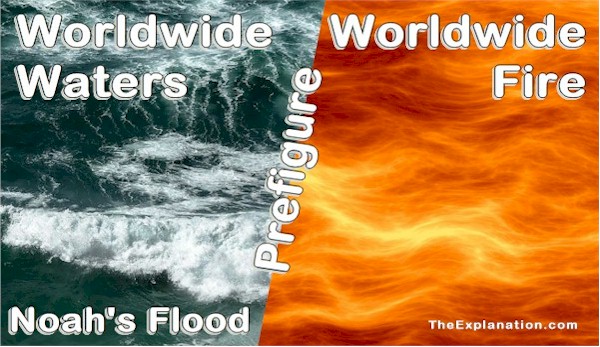 Figurative includes Noah’s floodwaters, which preFIGURE another event later in prophecy. It can have literal and spiritual overtones, which the flood does.

To grasp the literal and figurative meaning, let’s look at prefigures. We continue with one of the best-known stories of the Old Testament, Noah’s ark. Featured in comics to movies, faith, and scorn. A worldwide flood that covered the top of the highest mountain (see verses 19-20 below). Literally, everything physical, including peaks, trees, animals, birds, insects, all material entities contained on planet Earth were completely and wholly covered with water. I’ve used hyperbole, over-exaggerated adjectives, to drive this point home (figurative speech).

If we want to get picky, how could anyone know the water covered every mountain worldwide? After all, the survivors were in the closed ark, they couldn’t see and they didn’t travel to every place around the world! People ridicule this, even people who accept this on faith, don’t understand WHY God had to cover the mountains. Here’s the context.

18 And the waters prevailed, and were increased greatly upon the earth; and the ark went upon the face of the waters.

19 And the waters prevailed exceedingly upon the earth; and all the high hills, that were under the whole heaven, were covered.

20 Fifteen cubits upward did the waters prevail; and the mountains were covered.

22 All in whose nostrils was the breath of life, of all that was in the dry land, died.

23 And every living substance was destroyed which was upon the face of the ground, both man, and cattle, and the creeping things, and the fowl of the heaven; and they were destroyed from the earth: and Noah only remained alive, and they that were with him in the ark.

Non-believers and antagonists have a heyday with this narrative. Where could you ever get enough water to accomplish such a literal task? Cover Mount Everest at almost 9000 meters with water, how ridiculous! As a parenthesis, those same savant people would tell us that meteorites deposited the torrents of water on Earth, but that’s another story.

Did the flood cover the highest mountain? Was it worldwide? Yes, yes. How can I affirm that? Because the literal flood prefigures events of monumental importance.

If you balk at the literal explanation, you will not even consider the figurative explanation, what the flood prefigures.

God is hiding His truth in broad daylight. “At that time Jesus answered and said, I thank you, O Father, Lord of heaven and earth, because you have hid these things from the wise and prudent, and have revealed them to babes (Matthew 11:25).” God uses the literal and figurative key to hide the meaning from non-believers. Some believers only accept a local flood, and scorn the full narrative.

5 For this they willingly are ignorant of, that by the word of God the heavens were of old, and the earth standing out of the water and in the water:

6 Whereby the world that then was, being overflowed with water, perished:

7 But the heavens and the earth, which are now, by the same word are kept in store, reserved unto fire against the day of judgment and perdition of ungodly men.

For a start, the flood confirms the figurative nature of the Two Trees in the Garden of Eden. Or death or life, there’s no in-between. “The world that then was,” represents death (2 Peter 3:6), and the ark represents life. But beyond that, Noah’s flood prefigures the future destruction, death, of the entire physical Earth by fire. Both the water and the fire figuratively put an end to sin, the transgression of God’s way. Similarly, the ark we saw in the last lesson prefigures those saved for eternal life. Servants tried by fire, figurative or symbolic of overcoming trials, whom God will transform into spirit beings (1 Corinthians 15:50-54). This will take place when God fulfills His plan for humankind.

Literal and figurative. Literal water and fire prefigure BOTH destruction and salvation. As the waters overflow and prevail, so the fire will engulf all Earth. They both destroy the wicked and save the righteous. The water bore the ark up and saved it. Fire has no effect on spirit beings. At the end of God’s plan for humanity, this fire is literal. So, the literal water prefigures the literal fire. Both prefigure putting a definitive end to sin and the beginning of a new era in God’s plan.

A Bible context to meditate, it has the same figurative meaning and message as the passages above.

3 And through covetousness shall they with feigned words make merchandise of you: whose judgment now of a long time lingereth not, and their damnation slumbereth not.
4 For if God spared not the angels that sinned, but cast them down to hell, and delivered them into chains of darkness, to be reserved unto judgment;
5 And spared not the old world, but saved Noah the eighth person, a preacher of righteousness, bringing in the flood upon the world of the ungodly;
6 And turning the cities of Sodom and Gomorrha into ashes condemned them with an overthrow, making them an ensample unto those that after should live ungodly;
7 And delivered just Lot, vexed with the filthy conversation of the wicked:

Since you read all the way to here… you liked it. Please use the Social Network links just below to share this information from The Explanation, Noah’s Flood Prefigures Literal and Figurative Death by Fire