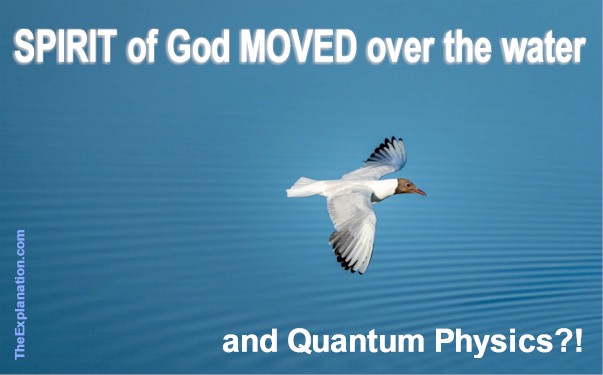 Quantum physics, what is it, and what could ever be the relationship with the Spirit of God MOVED over the waters in Genesis?

Quantum physics, the latest from science, seems light years away from the Spirit of God moving over the waters according to Genesis, but curiously there’s an interconnection. In English, to move has various meanings like, move forward, move house, moved by emotion, and various other understandings. Why focus on God’s Spirit and what exactly is the Biblical Hebrew meaning of the common word move in Genesis 1:2?
(Mind-Body Problem Solved, Chapter 29 – Table of Contents)

In the last chapter, we saw the interconnection between the immaterial world of the neshama-ruach and the material brain-body of humankind on Earth. The Creation story of the first human renders a clear definition of both the spirit and physical environments and the relationship between the two. The spirit acts on the material; this is the process of the mind acting on the brain.

Don’t ask me how the process works; I have no idea. But it is clear the spirit impacts the physical. In Genesis 2:7 the emphasis is on neshama because only humans possess it. There are twenty-four references in the Bible referring to God and humans with breath and inspiration. I do not want to be disrespectful by diminishing its role but despite that, other verses clearly show God also endowed the first and subsequent humans with ruach. Of the twenty-four neshama verses, ten include ruach and the latter is found about three hundred and eight times in the Old Testament, far above neshama.

So, what’s so important about ruach? In this section of Mind-Body Problem Solved is entitled Ruach and the Creation of Everything we are about to plunge into unchartered waters. Ruach is much more profound than you can imagine, it plays a central role, one of the fullest and least understood in God’s purpose. In fact, it is central to quantum physics. Theology and science mesh together wonderfully.

Why refer to Quantum Physics?

Allow me to introduce this subject with a little historic build-up. When I started this project of writing leading to this commentary of Genesis, I knew what I had in mind, but I had no idea it was going to lead to what I’m about to explain. I started The Explanation blog in May 2014, but the notes, outlining, and writing of Inventory of the Universe, my first book, began in 2010; this was a couple of years before the 4th of July 2012. Why that date? Because that’s the date the Higgs Boson was discovered and witnessed for the first time by the Large Hadron Collider in Geneva, Switzerland. Quantum physics received quite a boost.

I realize you don’t see the relationship between the Higgs Boson fundamental quantum particle and my writing, but I assure you there is one. Here’s an article from June 2014 discussing the Higgs Boson. I don’t expect you to understand the scientific jargon; I don’t fully grasp it myself! But what I would like you to see is some of the vocabulary used to describe what’s going on in the quantum physics Universe.

To shake around, new energy space, this bent, and squeezed space-time, creating ripples known as gravitational waves that also twisted the radiation that passed through the universe. Background microwave radiation, characteristic twisted or curled waves called the B-mode pattern—an intense jittering in the energy field.

In the next few chapters, we’ll see how quantum physics revolutionized scientific thinking in the five years following the discovery of the Higgs Boson. How elementary particles such as quarks are no longer considered elementary. How the concepts of waves (immaterial) and particles (material) have given way to fields. Now, the focus of fundamental science is on quantum fields.

Moved over the waters

These quantum fields use descriptive terminology like shake, energy, bent, squeezed, ripples, waves, twisted, microwaves, curled waves, jittering, and energy fields, as we saw above. Keep these descriptive terms in mind as we look at the meaning of the Spirit of God MOVED on the face of the waters.

1 In the beginning God created the heaven and the earth.

3 And God said, Let there be light: and there was light.

These two verses are capital because they set the stage. In verse 2 we have the presence of the Spirit and in verse 3 the Creation of light. The Spirit is implicated in Creation in a much deeper way than you can envision. But the first point to realize is there’s a junction between the invisible Spirit and the visible light similar to invisible neshama and visible body-brain. You’ve possibly never thought about it, but God transforms spirit into physical, and there’s a definite interconnection between the two. Science thinks something can come from nothing. The Bible reveals that behind the visible world is the invisible Spirit.

All the key elements, bar the humans and their environment, are present and presented in these introductory verses. The main stage is our Earth. A secondary stage is heaven. The producer of this production is God. Remember, this is Elohim, plural, composed of God the Father and God, the Word. And the final all-important presence is the Spirit of God, which is moving over the water-inundated planet. What is the Biblical Hebrew move?

Move is rachaph, a primitive root meaning it is the most basic form of a Hebrew word composed of the three-letter root. This is step three of the 4-Step Biblical Hebrew Word Mastery method. This word, rachaph, has no other derivative words and appears only three times in the entire Old Testament. The above is the first time. Here are the other two.

As an eagle stirs up her nest, flutters (H7363) over her young, spreads abroad her wings, takes them, bears them on her wings:

I’m using the first and fourth keys to master Biblical Hebrew words here; the fact the King James translators used various words to translate the same Biblical Hebrew word; that all these translations are interconnected and tell a story. This story uses three analogies.

There’s one Biblical Hebrew word (rachaph – H7363) for three translations (move, flutter, shake) and three analogies (fluttering wings, shaking bones, drunken man). I believe it is very reasonable to conclude that the Spirit of God was moving over the water with a wavy up and down, in and out, side-to-side type of motion. You might think this is imaginative or unimportant. Well, I’d say that the first few verses and chapters of Genesis are paramount for capturing the essence of the Bible narrative.

Please understand that we’re at the beginning of this expose. Understand what I’m NOT saying. The Spirit of God is certainly NOT a quantum field. That’s ridiculous. Neither the Large Hadron Collider nor any other human devised instrument can measure the Spirit of God. That too would be ludicrous.

What I am doing is taking you into unknown territory. Genesis 1:2 juxtaposes two very different phenomena that we don’t contemplate. On the one hand, you have the Spirit of God, which, by any definition, is an immense SPIRITUAL power. On the other hand, you have planet Earth covered with water, which is a PHYSICAL entity. You have two wholly opposed essences or substances.

We also know the relationship between the Spirit of God and the physical creation. Job 26:13 says, By His Spirit, He (God) garnished the heavens. Psalm 104:30 reiterates this, You send forth your spirit, they are created: and you renew the face of the earth. From these verses, we know the Spirit of God is the Power, the Force used to create the material universe. YHVH, Christ, the Word is the Creator. He uses the Spirit of God that moves in a fluttering, shaking motion to create quantum fields that react like ripples, twisted microwaves, curled waves, and jittering energy fields.

There is a continuity between God’s spiritual environment and our human physical world. We see it in Genesis 1:2 with the Spirit of God moving, fluttering and shaking on the face of the waters. We now see this same shaking in quantum fields at the very basis of our material world.

I ask you the question. Has scientific research discovered the ultimate step in quantum physics? Or should we say the first measurable step in the origin of our physical universe? The shaking, energy, bent, squeezed, ripples, waves, twisted, microwaves, curled waves, jittering, and energy fields? Those are the descriptions for quantum fields. It corresponds perfectly with the moving, fluttering, and shaking of the Spirit that brought the physical universe into existence.

Is science meeting God? Wow, that’s some question. We’re just starting with this subject. But we are headed for some answers that will astound you. The Explanation is beginning to bring science and theology, material knowledge, and spiritual understanding into coherent completeness.

Since you read all the way to here… you liked it. Please use the Social Network links just below to share this information from The Explanation, Quantum Physics & Spirit of God Moved. Strange Encounters