The All-Time Biggest Hidden Truth. Elohim, God is a Family 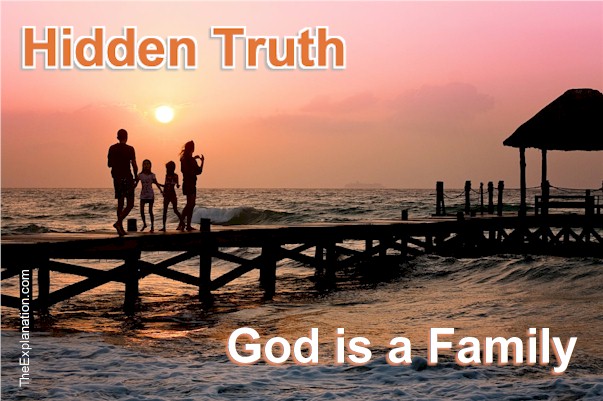 Elohim is plural in grammar. Elohim is a Family, multiple individuals, is a hidden truth from God’s Word. Let’s reveal it.

Unfortunately, the spiritual relationship between marriage, family, and God is a hidden truth. One of the reasons is, these family ties reveal not only the future of humans but also the way to reach that goal.
(Mind-Body Problem Solved, Chapter 10)

The Explanation has expounded on this family relationship enormously because it is fundamental in comprehending why humans are on Earth (to develop relationships) and why God instituted the marriage union and family. In four words, God is a family. If you’re hearing this for the first time, because it is a hidden truth, I understand both your amazement and especially your skepticism.

If there’s one point to take away from this episode, it’s God is a Family. God gave humankind the family institution because He created us in His image. He’s a family, so are we.

15 Of whom the whole family in heaven and earth is named,

We know God is our Father, but look at the implication of the Greek. It goes much further and includes lineage, family, and kindred, as we’ll confirm in the second part of this episode.

πατριά patria pat-ree-ah’; As if feminine of a derivative of G3962; paternal descent that is (concretely) a group of families or a whole race (nation):

Biologically, if someone is a father, they are automatically a parent, whether they assume their parental responsibility or not. Obviously, God, who is our Father (remember the opening words of the Lord’s Prayer in Matthew 6:9, Our Father who is in heaven…) assumes that role toward each of us.

By faith Moses, when he was born, was hid three months of his parents, (G3962) because they saw he was a proper child; and they were not afraid of the king’s commandment.

In Greek, there is a direct vocabulary link between the words father and family. Not so in English, but the spiritual reality is the Father is the head of His family, of which we are the earthly children, for now. This would seem evident when reading Scripture, but instead it’s a hidden truth.

John 1 reveals the bond we humans can have with God. It, too, is a family relationship. You can deepen your comprehension of this father-son (which is also a generic statement, absolutely including father-daughter) family ties by reading this episode.

12 But as many as received him, to them gave he power to become the sons of God, even to them that believe on his name:

14 And the Word was made flesh, and dwelt among us, (and we beheld his glory, the glory as of the only begotten of the Father,) full of grace and truth.

Sons of God, born—by the will of God, begotten—referring to Yahveh Elohim, these are all family terms. Are there any other such expressions to corroborate this? It’s time to reveal this hidden truth. Let’s take a look at some fundamental descriptions of God and His environment that will help us better define what and who this plural God (Elohim) who has a singular verb, is. And how we humans relate to Yahweh Elohim and Elohim.

Here we have the origin of the family institution; this explains one of the critical pieces of the puzzle turned over and put in its rightful position. And you know what, in some ways, you’re not surprised. Humankind knows very well that the family is the base of society. Doctrinally, nobody talks about this hidden truth. But you can’t help knowing it. References to the family and its functioning fill the Bible. No other book contains more pertinent information about this basic building block of society and affirmations that God is a Family.

Here’s another hidden truth in the very first chapter of Genesis, the first five minutes of the story where the author introduces the characters God, Elohim (plural), and humans. Few stop to think about it, yet the family relationship between God and humans is right there before our eyes.

To understand this context, we need to step back a second and make a point regarding the previous verses in Genesis 1, referring to fruit, herb seed, fish, birds, creeping things, and beast. There is an identical 3-word clause describing each of these reproductive creations. Between Genesis 1:11 and 1:25, it repeats no less than ten times: after his kind, or after their kind. I highly suggest you read these verses to refresh your mind. Quickly click here, go over to UnlockBibleMeaning.com to read this online. The frequent repetition of these words indicates a crucial reason the author wants you to accept. This should not be hidden truth.

It doesn’t take rocket science to understand what after his kind, or after their kind means. Orange trees give oranges. Pepper vines give peppers. Salmon breed salmon. Parrots produce parrots. Scorpions give birth to scorpions. Rhinoceros engender rhinoceros; this refers to the inviolability of one species giving birth to an entirely different species. We are not talking about the variety withIN a particular species that comes from cross-pollination or cross-breeding or environmental adaptation. Yes, there’s variety, but no, there’s not, never has been, and never will be a transformation of one species into another one. No new species.

An axiom of Science is first that experiments must work, and second, they must be reproducible in that they replicate the same results.

Although scientists have their controversy regarding the exact definition of the term species, one of the critical precepts is to what extent one species can crossbreed with another species. The consensus, in scientific circles, is they cannot. The hidden truth is this runs amuck of the evolutionary process, which shows that man either descends from or has a common ancestor with apes. I don’t want to get into such controversy.

The point is, whichever way you slice it, science has various species mutating into different species. There’s no evidence, there’s no reproducible experiment of this, and we hear no talk of when mutating species become a specific species. They only reproduce among themselves; a fundamental precept for defining species. We have an example of horses and donkeys (2 different species) producing mules, but they are sterile.

Ligers (lions and tigers, also two separate species) are rare, and if you read the linked article, reproduction is nil. In the video below, you can see other hybrid species. Notice the narrator’s references to the necessity for human intervention for breeding, or how the offspring are sick or infertile.

According to what we just read in Gen. 1:25, “And God made the beast of the earth after his kind… ” Apes can only give apes, in all their varieties granted, but all are always only apes. God’s Word emphasizes this ten times for all flora and all fauna. The Bible says apes cannot originate humans, only other apes.

Now reread a resume of Gen. 1:26-27 with the concept of species in mind: And God said, “Let us make man in our image, after our likeness. So God created man in his own image, in the image of God created he him…”

Here’s the question: What species are humans?

If you’ve never heard it put this way before, because it’s a hidden truth, I can understand that you’re conceivably having difficulty articulating an answer. God, in the above two verses, repeats the two words image and likeness four times to help the answer take root and sink in. Why such emphasis?

Humankind is of the kind of God.

According to the Bible, we are not descendants of some ape, nor do we have a common ancestor. Our genes and chromosomes have some resemblance. We discussed this in Inventory of the Universe in the chapter about Human Life and a comparison of genes. We know that just as we have chromosomes and genes similar to earthworms, scorpions, grass, and bacteria, the genome is typical of all life, but that does not mean we are their descendants.

In the same above verse in Genesis 1:26, where God tells us humans have the image and likeness of God, He also tells us our relationship to apes and earthworms. “Let them (humans created with the image of God) have dominion over the fish of the sea, and over the fowl of the air, and over the cattle, and over all the earth, and over every creeping thing that creeps upon the earth.”

Even in King James English, this is clear. We will be getting into the Biblical Hebrew to sharpen the answer to the delicate but vital question: why were humans created in the image of God, with His likeness, after His kind?

So why haven’t you heard this biblical hidden truth about the original model of humans? Excellent question. The Bible knowledge that God is a Family, that He created humans in His image is the key reason humans possess consciousness and mind. We’re seeing and will reveal much more detail WHY humans have these two unique and precious elements.

Since you read all the way to here… you liked it. Please use the Social Network links just below to share this information from The Explanation, The All-Time Biggest Hidden Truth. Elohim, God is a Family