The Earth, From the Beginning of Creation – As Beautiful As Ever 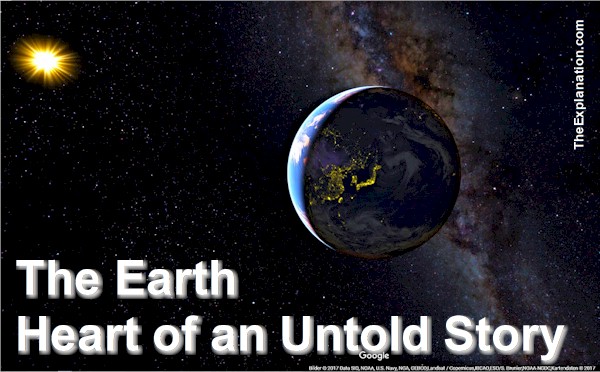 The Earth, our unique planet, was a magnificently created orb in a far-flung corner of the immense Universe

The Earth, magnificent and beautiful, heart of an untold story

The Earth is distinctive among billions and billions of objects in the vastness of the Universe. It would appear lost and forgotten, but, in fact, it is the seat of effervescent and intense activity as an untold story unfolds slowly but surely. The Bible tells that story.
(Origin of the Universe, chapter 7.2)

Whereas the Bible introduces heavens in the plural, it presents earth in the singular the earth; this is the last word in the first verse. The first word in the second verse is identical And the earth…  The purpose is that God leads off by showing the creation of the entire universe and then literally brings us down to earth. Why? Because that’s where the action is. The rest of the book expounds on this focal planet. The introduction situates the frame of reference. At this point, nothing else is important, focus on the earth.

The Earth is distinctive in the vastness of the Universe. It would appear lost, but it is the seat of intense activity as an untold story unfolds slowly but surely. The Bible tells that story. Click To Tweet
You can follow along by using the online Bible, the Interlinear Bible, Strong’s Concordance and the Hebrew/Greek Concordance at UnlockBibleMeaning.com
If you’ve come across this blog post for the first time, then please know that it is part of a larger work. To see the entire context, which you can read online, click here.
Dig for Bible Study gems to enhance your understanding: See ‘Further Study’ suggestions at the end of this blog post.
Galacti is our fictitious time-traveling, investigative, roving reporter who lends his insights and voice to the development of the narrative

A major query today is whether there is life anywhere else in the universe. There is much conjecture on this subject. The Bible does not directly address this question; it simply says, “The highest heavens belong to the Lord, but the earth he has given to man” (Psalm 115:16). As yet, we have no signs of human life elsewhere than on our planet,

The Bible indicates that this orb is the sole habitation of man. If we step back in contemplation, this is truly awesome. A little speck of dust ‘lost’ in an expanding cosmos…how humbling. And at the same time, the lone planet inhabited by humanity, how sobering. Without getting ahead of ourselves, let’s begin to realize that something marvelous is going on here and now. Earth is the single spot in the universe. God chose to develop His plan.

The Bible indicates that this orb is the sole inhabitation of man. If we step back in contemplation, this is truly awesome. A little speck of dust ‘lost’ in an expanding cosmos...how humbling. And at the same time, how sobering. Click To Tweet

Here’s another verse about creation, “Thus says God the Lord, he that created the heavens, and stretched them out; he that spread forth (H7554) the earth, and that which comes out of it; he that gives breath to the people upon it, and spirit to them that walk therein” (Isaiah 42:5).

רָקַע râqaʻ raw-kah’; a primitive root; to pound the earth (as a sign of passion); by analogy to expand (by hammering); by implication, to overlay (with thin sheets of metal):

KJV – beat, make broad, spread abroad (forth, over, out, into plates), stamp, stretch.

In Job 37:18, we saw God spread out (H7554) the sky, here the same verb, raqa, is used for the formation of the earth. The narrative has now brought us down to earth. It has set the stage. It started by spreading the sky, which science confirms started some 13.7 billion years ago, chronologically advancing to earth about 4 1/2 billion years ago. Although the Bible briefly discusses the stars and the heavens, it is a book about humans on earth. It specifically shows what took place on our globe. Why these events took place, what our goals should be, and what the outcome will be.

The New Testament quotes the opening verse of the Bible in Hebrews:

And, You, Lord, in the beginning have laid the foundation (G2311) of the earth; and the heavens are the works of your hands:

θεμελιόω themelioō them-el-ee-o’-o; From G2310; to lay a basis for that is (literally) erect or (figuratively) consolidate:

θεμέλιος themelios them-el’-ee-os; From a derivative of G5087; something put down that is a substruction (of a building etc.) (literally or figuratively): KJV – foundation.

Once again, this is referring to the original creation, the beginning in Genesis 1.1, some 13.7 billion years ago. It includes the subsequent erection and consolidation of our earth in all its splendor and health.

Immediately a contradiction becomes apparent. I have insisted on the beauty and magnificence of the initial creation and here we read without form and void. Understanding the meaning of this phrase, the famous tohu ve bohu, which we’ll enlighten next week, will reveal the absence of contradiction and the presence of complementarity.

Today I’ll leave with a grammatical clue for the comprehension of the verb the earth was. Once again, excuse me for being pedantic but, if we don’t get these basics right, it will be impossible to follow through sensibly.  Translating verse 2 this way gives the impression that the original creation was waste and confusion, and this is assuredly not the case. The word was is translated became in Genesis 47:26 “…except the land of the priests only, which became not Pharaoh’s” (KJV).

The intention here denotes an action that took place sometime in the past and is completed. There was some endeavor that occurred that scarred this planet. It left the divine creation formless and empty. What was that event?

This blog post is an excerpt from chapter 7.2 of the book Origin of the Universe

Here are two other verses that use raqa, as we saw in Isaiah 42:5 referring specifically to Earth.

Psalm 136:6
To him that stretched out (H7554) the earth above the waters: for his mercy endures for ever.
Isaiah 40:19
The workman melts a graven image, and the goldsmith spreads (H7554) it over with gold, and casts silver chains.

We have to be careful not to read too much into interpretation rather than a translation of Biblical Hebrew. So I’m not saying this is what it means, but when we look at down-to-earth reality, I’m saying: isn’t this interesting, notice the similitude between what the Bible implies and the facts around us.

In Psa 136:6, “…stretched out H7554 the earth above the waters…” Genesis 1.2 says water covered the Earth; this stretching out above the waters is the reality. The continents are huge mountains raised above the sea-floor. Consider that water covers 71% of Earth, the land is the exception in the minority. Without that 29% of the land, human life could not exist. No land, no humans.

Isaiah 40:19 should be rendered slightly differently in Strongs “… spreads it over H7554 …” You can verify this by switching to the Interlinear for this verse at UnlockBibleMeaning.com. It’s like a thin coating spread out over a solid underlay. And that’s what Earth is exactly: A skinny thin crust over a seething molten core. In Inventory of the Universe, I pointed out that our planet’s crusty foundation is between 5-70 km thick.

Notice another eye-opener in Isa. 42:5 “… He (God) that spread forth (H7554) the earth, and that which comes out of it…” Everything that we contemplate on Earth, flora, and fauna, including us humans who are primarily composed of the dust particles come out of it. What’s here comes from this spread out crust. The reality of earthly facts and the Bible narrative correspond.

Since you read all the way to here… you liked it. Please use the Social Network links just below to share this information from The Explanation, The Earth, From the Beginning of Creation – As Beautiful As Ever