Oceans: Heat, Oxygen and Food for Life on Earth 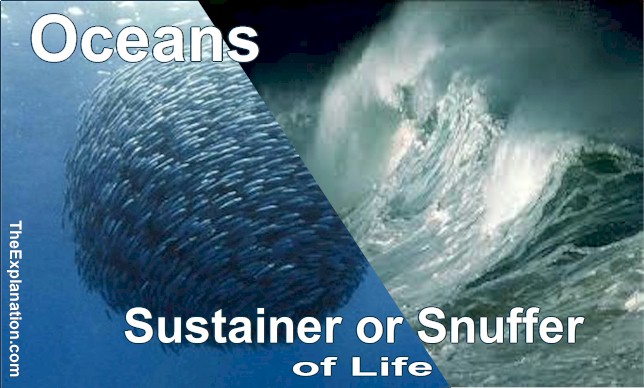 Oceans represent 99% of living space on planet earth. They can be both frightening and soothing, but they are always majestic and fascinating, Oceans: Heat, Oxygen and Food for Life on Earth but, they can also be a snuffer of life.

Notice the diagram below where the light green horizontal area represents the top 150 meters of ocean water. It’s the zone where light penetrates the water promoting photosynthesis, and the production of oxygen (appropriately green or blue algae blooms are responsible for this).
(Inventory of the Universe, chapter 3.8) Deep Seat Oxygen and Temperature comparisons. Near the surface light penetrates the water, promoting photosynthesis, and the production of oxygen.

However, this process tapers off rapidly and oxygen levels drop considerably.

The fish in the ocean which are similar to the ones we ate in the café (some of us, anyway) as well as the water, air, and food, are interactive processes continually in motion.

Yet they change with depth as oxygen and temperature levels drop off.

We descend to about 800 meters as if we’re in a 4-D movie: seeing the ocean, but not feeling the pressure at the deepest point (11,318 tons per square meter). This would be the equivalent of one person in our touring party supporting the weight of fifty jumbo jets.

Neither do we feel the lack of oxygen while the carbon dioxide level is at its maximum. On this 4-D ride, we are like the scientists discovering deepwater creatures and roaming the seamounts as well as the crevices and underwater magma-spewing vents.

In doing so, we encounter many odd-looking fish sporting new “fish styles,” such as the frightening-looking but harmless deep-sea dragonfish. Odder still are the creatures discovered in the Juan de Fuca Ridge, off the coast of Washington state, near those underwater hydrothermal vents.

These magma-spewing vents provide hydrogen sulfide as the basis of the food chain: chemical exchanges help sustain the microbes, fish, and other creatures that live near them rather than the usual sources of life (nutrients and oxygen). A hermaphroditic fish equipped with both male and female organs swims by.

This fish can change sex when mating, and can even reproduce by fertilizing itself in order to expand its deep-sea vent community. Oceans and their phosphate and nitrate levels of nutrients in the different oceans.

Food is the next focus of our wanderings as we follow the lines on our diagram (the backdrop to our deep-sea dive) to trace all the nutrients in the different oceans: black lines for the Atlantic, green for the Pacific, and red for the Indian.

Scarce at and near the surface, phosphate and nitrate are abundant below. They are surprising in their availability.

The Pacific and Indian Oceans in the Southern Hemisphere have a more abundant food supply since the waters are warmer on the surface. Any nutrients present in that first three meters of the ocean’s surface quickly become food for phytoplankton, while the colder depths retain an abundance of nutrients.

The Atlantic Ocean is colder in general and retains the nutrients in a kind of “deep freeze” until the upwelling of the Gulf Stream (a current originating south of Florida that is 300 times faster than the Amazon river) carries warmth to the nippy Atlantic, whereupon a cornucopia of foodstuffs becomes available.

Air, water, and food intermingle in yet another cycle and a welcome wonder of the world.

As the waters rise and a sudden wave swell crashes against our dry land shelter, we’re directed back to the Water Cycle Café in case anyone wants to partake of the Water Cycle’s homemade food and beverages.

I don’t know about you, but I could use a cold drink while I contemplate the 360-degree view of this immense, transporting, nourishing, and cleansing necessity of man; this sustainer, and, at times, snuffer of life; this unrestrained, dauntless mass of water that reminds us of our fragility.

Where did the 1,386,000,000 cubic kilometers of water in the oceans and the 24,064,000 cubic kilometers of freshwater stored in the ice caps and glaciers come from? The answer is embarrassing: we don’t really know. If we poll our fellow travelers, some say it came from the Earth itself—from the meeting of atmospheric hydrogen and oxygen.

Others speak of a shower of meteorites carrying the water into our cocoon, but we really don’t know. The mystery remains tantalizing. Why does the surface of a planet called Earth consist of 71 percent water, like some alien world? In fact, the “alien” planets, Mercury, Jupiter, and Venus (from which Galacti still has the “brochures”), are vastly different from our water-covered Earth.

To our knowledge, nothing else comes even remotely close to this planet, with its oceans and fresh water in the entire universe. The ice found on Mars pales in comparison. Imagine the unimaginable: planet water.

Instead of our expected visit to the café, we take a sudden detour. We zip across the water as if we were in an Airbus A380, et voilà: we’re standing on springy moss, with six-hundred-year-old trees overhead and dirt paths winding their way through.

“Welcome to land,” we hear from within the primeval forest.

This post is an excerpt from chapter 3.8 of Inventory of the Universe.

Interesting facts about the oceans : 99% of living space on Earth is in the Oceans.

Oceans … 2 minutes will make you think about them differently.

Dive into the unexplored universe beneath the waves: the beautiful, fragile (and sometimes terrifying) world of the ocean.

Since you read all the way to here… you liked it. Please use the Social Network links just below to share this information from The Explanation, Oceans: Heat, Oxygen and Food for Life on Earth