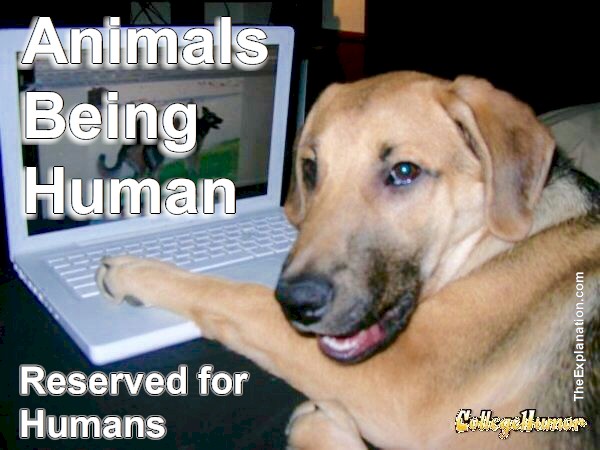 Being human and the definition of human life has been an enigma from time immemorial. Can we give a definitive answer to this dilemma? Yes.

Animals being human. It’s a good try, but it has to be set up by humans. Humans are characterized by the possession of cognitive abilities that come from the mind.

I’ve been thinking and working on The Explanation Series for a good part of my life. Some fifteen years ago I visited the evolution gallery of the British Museum.  I wanted to see how various classes of scientists defined ‘human.’ What is it that sets us apart and at the pinnacle of living creatures on Earth.
(Audit of the Universe, chapter 7.2)

First, for clarity’s sake, I want to elaborate what humankind has in common with animal kind:

Both humans and animals have life, and if we break certain parts of the physical body, both die. If we cut off blood circulation, both die. If we cut off oxygen circulation, both die. In these three areas–physical body, blood, oxygen—of life although the functioning (and even existence in some cases) of these major life systems can be extremely different–fish breathe oxygen underwater, humans cannot–both animals and humans are comparable.

Now let’s see the focus of the British Museum along with the Smithsonian, the Louvre and the Cairo Museums are probably the most renowned in the world and should be able to enlighten us in our quest to pierce the mystery of what being human is all about.

There are many exhibits of the physical specifics of humankind. Here is a very brief summary of these traits:

From head to toe, humans are made to stand upright.

Anthropologists indicate, ‘what caused this drastic increase in size is unclear‘ but believe this human trait allowed humankind to progress and develop more sophisticated hunting tools and strategies, social structures and eventually language.

I don’t want to dwell on these physical traits but the British Museum exposes three other differences identifying humans:

All of these five physical traits contribute to set humans apart and make our species unique.

But, let’s take it a step further. If these human skeletal characteristics are important of and by themselves what is more primary is what they allow us to accomplish. Bipedalism allows us to practice sports of all types. Brains allow us to do research and mathematical calculations. Similar sized sexes allow men and women to cooperate in a more human way. Childhood is not a ‘skeletal trait’ and I’m not sure why it should be included in the British Museum list. This trait is vital for humans, and I will return to it at length in chapter 12 about how humankind socializes. Precision-grip permits us to manipulate our environment in umpteen ways.

I realize what the vocation of the British Museum is: focusing on the physical traits of human beings, the morphology of skeletal remains, as revealed by archaeology, anthropology and like sciences. However, in so doing we reduce and even limit comprehension of humankind to just a physical level. But this emphasis clouds the essential.

The definition of what being human involves deserves a much more profound analysis rather than just scrutinizing material parts of dead bodies. Human life is vastly more than that. As important as these physical abilities are what is capital is what they allow humans to do and what humankind has accomplished with them.

Skeletal traits are useless without ‘something’ to supervise and administer them so the physical body knows what to do. In the last post, philosophers indicated the traits of humans. What being human is all about: civilization, language, abstract thought, morals, ethics, perfectability, technology, analysis.

None of these traits can be produced by a physical body alone. These are cognitive attributes. Some people, most people, would attribute these characteristics to the brain. Animals have brains, but they have none of these philosopher differentiating attributes. People would say that animals have lower levels of some of these trains. Yes, much lower levels. People would add that the human brain is ‘more developed’ than the animal brain. Yes, vastly more developed. Then we can add ‘instinct’ into the equation–but there again, there still remains a huge chasm between animal instinct and the capacity of being human.

I submit to you that to bridge this vast chasm that separates being animal from being human is the ‘cognitive capacity of humans.’  As dictionary defines cognition: relating to the mental processes of perception, memory, judgment, and reasoning, as contrasted with emotional and volitional processes. The seat of this mental capacity is referred to as ‘mind.’

Museums Reveal what Being Human is

Let’s stay with the theme of museums and reveal what being human is. In Inventory of the Universe chapter 10 I compared humankind and animal kind. In Audit of the Universe I will take it to a far superior level. In fact, other than bodily and skeletal comparisons, there is absolutely no similitude whatsoever between humans and animals. The gulf is so great, it is insurmountable.

France, where I live, is the country of museums. No other country has a density of museums, as France does. There are about 1250 officially recognized museums. But to this must be added thousands of municipal and local museums. They fall into multiple categories.

Being Human is a never-ending story in itself.

There’s definitely something innate about being human that sets humankind apart in a superior way.

It’s the capacity of the human brain and mind. Only humankind, of all the creatures on earth, are dreamers and thinkers and poets as witnessed by all the museum collections. Humankind lives light years beyond its skeletal and biological existence and concerns itself with a mental, civil, culture, even spiritual, life. This is why humans rule planet Earth as the highest expression of life.

Did you notice the ‘Imaginarium’ in the list of museums? Being human, each human person who has walked the face of this Earth is innately equipped with imagination. The ability to come up with new concepts about every imaginable and even unimaginable subject–like creating a museum dedicated to ‘imagination!’ That’s the epitome of mind, the characteristic of being human.

Wow, it makes you stop and think.

This blog post is an excerpt from chapter 7.2 of Audit of the Universe

Since you read all the way to here… you liked it. Please use the Social Network links just below to share this information from The Explanation, The Essence of Being Human is Revealed by Museums Dedicated to Life Activities