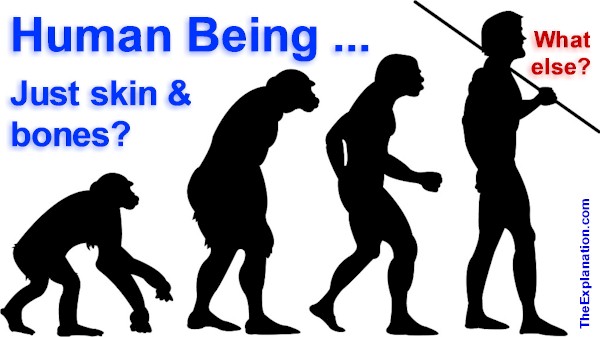 Each human being is composed of physical elements like Carbon and Oxygen but are there others that are not in the Periodic Table of Elements?

What is a human being? Just skin and bones? Or much more … what else is added?

Answering the very philosophical and elusive question: What is a Human Being? We’ve given renowned philosophers the chance to give their insights about human life: Civilization, language, abstract thought, morals, ethics, perfectability, technology, and analysis.
(Audit of the Universe, chapter 7.3)

We’ve given the British Museum the chance to tell us about humankind’s skeletal differences: Bipedalism, big brains, similar-sized sexes, childhood, and a precision grip.

To which I’ve added a versatile and non-exhaustive list of Museums which showcase a vast array of human being’s accomplishments. Including one called the Imaginarium … dedicated to human Imagination. In fact, there are numerous Imaginariums devoted to cultivating and stimulating the imagination to forward the goals of commerce, science, recreation, as well as spiritual and artistic endeavors.

When you get down to the common denominator of all these references to life of animals and humans we could talk about body (British Museum’s skeletal parts), the brain which runs and coordinates all the body functions including the main ones: Breathing and blood flow to oxygenate and feed the body. Frankly, this description can be applied to both animal and human life. Yes, when it comes to what I’ll call ‘physical life’ we’re all the same.

Animals and humans have skeletal parts, a brain, breathing and blood flow systems. When it comes to what I'll call 'physical life' we're all the same. Click To Tweet

But when it comes to a human being the above definition lacks an essential component without which we can’t add the adjective: human. That is the all-important ‘mind.’ Animals exhibit certain functions that we might equate with mind and some scientists and others would say that this is the beginning of their development of mind.

We have a term to refer to this extra-physical activity of animals: Instinct. As defined by the dictionary: An innate, typically fixed pattern of behavior in animals in response to certain stimuli. Notice the ‘typically fixed pattern.’ That’s not to say animals can’t take initiative and make decisions, they can. I discussed this in Inventory of the Universe in the chapter about fauna. But the point is there are light-years between animal instinct and human mind.

My conclusion on this matter is that the underlying and all-encompassing uniqueness of humankind is their mind. Each and every human being that has walked the face of this Earth has been and is equipped with a mind. Chapter 9 of Inventory of the Universe was devoted in part to the mind of man as will be chapter 9 of Audit of the Universe. We’ll delve deeply into this subject without which it is impossible to understand how to establish peace and prosperity on Earth.

Think about this. We talk about ‘time space continuum’ That includes everything (animate and inanimate) in the space around us, in front and back (length), beside us on the left and right (width) and above and below us (height).  Time represents the seconds, minutes, hours, days, months, years… we have in the past, present and future.

ONLY HUMANKIND can use and impact space and time. Animals cannot retain the notion of time and space. Yes, they live in the present, yes they migrate over vast distances (space), in season (time), according to an instinctive ritual. But they do not even begin to impact time and space other than with their immediate footprint and eating habits. In the animal world nothing changes, animal life goes on, day in day out. that is the typically fixed pattern of instinct.

But, from one day to the next (time) men, women, children transform, each of our worlds (space) is reshaped, hopefully for the better, because humankind moves on. Each human being constructs and shapes themselves and we’re a little different each day.

In the animal world nothing changes life follows a pattern of instinct. They leave an impact from their immediate footprint and eating habits. But, from one day to the next (time) men, women, children transform, each of our worlds… Click To Tweet

We move on because of one element: the mind with which each one of us is equipped. Returning to the Imaginarium museum, only human beings can form images and ideas in their heads and minds without input from their eyes and ears. Our human ‘senses’ of smell, touch etc can conjure up images, concepts, solutions out of the blue, as we say. Consider young children with no toys, they can pick up anything and ‘make-believe.’ That’s the power of humans, that’s the essence of being human.

I submit to you that the central characteristic and basis for the definition of what HUMAN LIFE and what a HUMAN BEING IS is the POSSESSION of the MIND. In chapter 9 of Audit of the Universe we will discuss the state of an individual’s mind. I’ll just mention here, what you know, that a mind can be distorted or sick in which case we’d say a person isn’t in their ‘right mind.’ My point being, they still have a ‘mind,’ it’s just not functioning properly–I will explain this situation.

I submit to you that the central characteristic and basis for the definition of what HUMAN LIFE and what a HUMAN BEING IS is the POSSESSION of what we call the MIND. Click To Tweet

In this chapter I have briefly given you my vision (that’s what the mind can accomplish) of human life and what identifies a human being–the mind. You might be thinking, ‘that’s all conjecture.’ Well, we’re just getting into the crux of this matter, there’s much more involved as you’ll see.

For now we conclude this chapter about human life. To do so we need to come back to the focus of Audit of the Universe: To evaluate the state of human life on Earth, here and now. How are we treating human life? Is it edging closer to or further from peace and prosperity?

Below you will see links to some articles about general attitude towards the value of human life. Is it held in esteem being properly cared for? Considering we only have one life here and now, is humanity treating it with respect? Acknowledging its utmost importance, some would say its sacred nature?

Special Report: A business where human bodies were butchered, packaged and sold https://buff.ly/2DotwHO I’m in the process of writing about human #life and especially our respect for it. This article deals with dead #human bodies but it does reveal a callousness when it comes to life, #death and financial gain. Somehow we’ve lost the admiration and reverence for #humanlife. Is it because of the individualistic society we live in? #theExplanation #AuditLife

We can’t ban killer robots – it’s already too late https://buff.ly/2gaxOfB #Chemical #warfare, atomic warfare, anti-personnel mines … all developed technology that (most) nations have outlawed because of their deadliness. Now come #killerrobots commanded only by their own #algorithm. They choose their own #targets and can #kill indiscriminately. Why can #human minds develop such atrocities? #theExplanation #AuditMind #AuditViolence

Fight the silencing of gun research http://buff.ly/2ro19nF Beyond the evidence that the widespread presence of #guns causes more #deaths the question is, why is there such a human fascination for weapons? #theExplanation #AuditViolence

Children bear ‘disproportionate lethal impact’ of Syrian war, say researchers https://buff.ly/2zVf7l5 It’s not just the number of #children killed. That’s horrifying in itself. But, it’s the impact of #war, fear, fleeing, #hunger on infant minds and developing lives. A generation of scarred human beings … how can you build stable #families, #cities, #nations on rubble? Can we bomb and cajole people into peace?! #theExplanation #AuditViolence

Thankfully there are also positives regarding attitude towards human life:

Models of Respect https://buff.ly/2icnzse Short and wise article. “I want to see how people are treating other #people, human being to #humanbeing,” says the author. It’s all about #relationships. And it’s part of behavior. Did you know that #behavior is the result of #humannature and #freewill? Think about it, relationships characterize #humans, it’s part of our nature. Respect may or may not be exercised by each of us planetwide–it is a free will #choice as to whether we do it or don’t do it. #theExplanation #AuditBehavior

Why Ikea’s flatpack refugee shelter won design of the year https://buff.ly/2hzVTg2 Making a difference for #refugees. Some positive news of #shelters and #dwellings that really work. #Philanthropy is alive and helping where it can. #theExplanation #AuditBehavior

Now it’s up to you. What’s your audit of planet-wide human life. Are we shaping up or down? Next, we take a look at the human body and how we are treating ourselves and our physical health.

This blog post is an excerpt from chapter 7.3 of Audit of the Universe.

Since you read all the way to here… you liked it. Please use the Social Network links just below to share this information from The Explanation, A Human Being–What Material and Immaterial Components Constitute Humans?