The Main Characters of our Play: Presentation of God and Humans 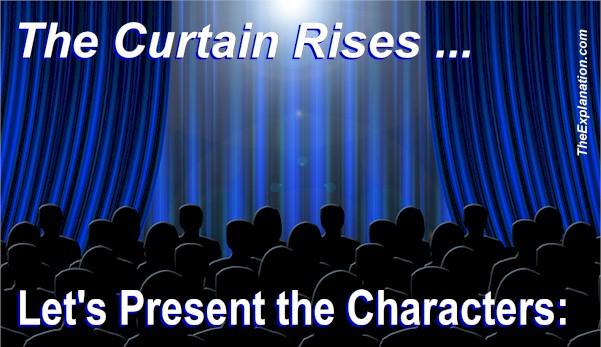 Presentation of the principal characters that will take center stage of this Bible drama.

The curtain rises on our Bible drama. Let’s present our first characters.

Scene 1: God as Creator (1st of our characters)

The opening frame of the movie shows heaven appearing. In our bird’s-eye view at the moment, all we can distinguish is this vast space and a planet–Earth. God is present, but He chooses to show himself in His work. He is keeping a bit of the mystery, not appearing yet as a personage.
(Origin of the Universe, chapter 4.2)

If you’ve come across this blog post for the first time, then please know that it is part of a more extensive work. To see the entire context, which you can read online, click here.

In the beginning God created the heaven and the earth (Gen 1.1)

So begins the Bible, plunging us into a science-fiction scenario, stating the origin of what we often take for granted, what is above and beneath us.

This opening statement takes the following points for granted:

Of itself, this merits a lot of explanation which is forthcoming—for now, think about Inventory of the Universe and chapter 1, Expanding Finity. From the powerful opening statement, this coming into existence, even if we don’t know how, is a given. There’s no asterisk to an appendix or Wikipedia to explain the characters Who or What God is. In this initial statement, He is, and He has the power to create. Even from a literary point of view, this is the scenario, and I think these are logical conclusions. We will expound this point in due time.

There is a corollary to this introductory phrase that I’d like to draw your attention to God was on the scene before this creation. Logically, He must’ve been there ‘somewhere’ before this beginning. The opening line of Genesis is not the beginning of God, but of the heaven and the earth. It doesn’t tell us where God comes from, how He got there, or how long He’s been around. Apparently, at this point in the story, those points are not of vital importance.

Once again, nobody is asking you to believe this any more than you believe Star Wars or Harry Potter. If you like, take it as a literary work that we’re analyzing—just like you’d do in a literature class.

Scene 2: Humans in the form of Man and Woman (2nd of our characters)

Following the initial statement, the Bible runs the creation scenario, coming to the sixth day when God creates the Man and the Woman. He also creates the animals and creepy-crawlies earlier this same day. As a screenwriter would in the first ten minutes of a movie, we’re setting up the key characters and their relationships, so we’re skipping some context, to which we will return later.

The fish and the fowl populate the earth. Squawking, swimming, squirming. But God has plans beyond just the animals.

Like a master craftsman, He carefully, but effortlessly, creates people, the characters, strange and new individuals with bare flesh. Limbs, hair, eyes, chest, breasts, face. These are humans: man and woman.

God said, let us make man in our own image, in our own likeness…. male and female… and let them have dominion over the fish, the fowl, and every living thing that creeps on the earth (Gen 1.26)
Genesis 1.26 Humans have the image of God and dominion over all the fauna on earth Click To Tweet

Notice that God, in this context, takes a plural pronoun: “let us…” We’ll come back to this.

They (God) create man with their own image and likeness. No lengthy explanation here, even if it merits one. Suffice it to say, it is evident that there’s a unique relationship between God and Man (of both sexes). God did not make the animals with this divine image and likeness; not only do humans possess this distinction, but we see that humans are also given dominion or governance over the animals.

Ever heard this: “You’re the spitting image of…” or “When you do that, you are just like…”  With this one short, clear resemblance statement in Gen 1.26, the Author reveals two fundamental principles that give us insight into the kinship of God, humans (man and woman), and animals. God created both humans and animals, yet humans have a special close relationship with God; moreover, God does not have this relationship with animals.

The characters do have a relationship with animals; specifically, he has ‘dominion’ over the fauna. Most people find the connotation of dominion dreadful, and we will clarify its meaning shortly, let’s say here that the characters are put in charge of taking care of the animals. In the chain of command, animals are ‘under’ man. Be assured that translation dominion does not mean humans can do whatever they want with animals.

Galacti gently nudges us to look at the man. Surprises on the stage! What is Man doing? The man and woman are key characters.

This blog post is an excerpt from chapter 4.2 of Origin of the Universe.

Since you read all the way to here… you liked it. Please use the Social Network links just below to share this information from The Explanation, The Main Characters of our Play: Presentation of God and Humans