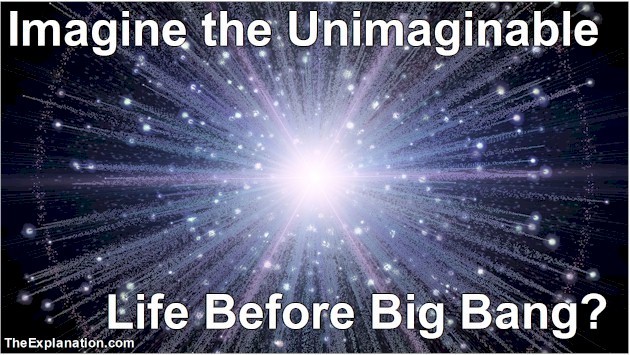 Imagine the unimaginable . . .
Wrap your mind around the infinite . . . Imagine the Unimaginable, Life Before Big Bang? Was there Life? What was the impetus for Big Bang? Where did it come from?

Galacti, our time-traveling investigative roving reporter, is on the scene 13.8 billion years ago and is startled by the appearance of something out of nowhere: an object that is the infinitesimal size of a pinhead. Its minute dimensions are of inverse proportion to its importance. While Galacti is keeping his eye on this pinhead, a nanosecond unfolds. It is the first billionth of the first second of time in the universe.
(Inventory of the Universe, chapter 1.1-2)

From this outside-of-the-universe vantage point, Galacti can see the following:

Space, time, energy, and matter are compressed in the pinhead Galacti observes. As our roving reporter examines these four basic elements, he envisions more complexity within the micron pinhead:

Space: The distance between your eyes and a string of DNA under an electron microscope, your eyes gazing at a distant pulsar 25,000 light-years away, or the Hubble telescope in space scrutinizing the edge of the universe or a starfield 150,000 light-years in diameter.

Time: The seconds taken to read this page. The weeks taken to hike to a Mount Everest base camp. The months taken to travel on a cruise ship around the world. The years of your life span. The 13.8 billion years it took for the outer layer of matter to reach its present position—the outer peel of the universe.

Matter: The 1 x 1078 (otherwise written as a 1 followed by 78 zeroes) hydrogen atoms in the observable universe. Every page of the well over 130 million books ever published. The bodies of every being (both animals and man). The celestial bodies and the interstellar space containing, on average, a mere one atom per cubic meter.

Energy: From the heat of a human body, to that of the seething 6,000-degree Celsius core of Earth, to the thermonuclear 6.5 million degrees Celsius fires of our sun, which is but a wet firecracker’s worth of energy compared to the billions of suns detonating and blazing throughout space.

A nanosecond—a fraction of a blinking second—and the birth of the universe just appears. Out of Nowheresville, from naught, comes finity. It is a spectacular, eye-popping event: our universe has come into being, seemingly out of that tiny pinhead.

Galacti has just become an eyewitness to the singular, once-in-a-universe time launch of man’s adventure in the universe. We’ve got liftoff—we’re airborne.

Imagine that.
Imagine the universe made up of tiny points.

Let’s return to the Big Bang constituents. Galacti realizes that there are few constituent particles in the pinhead. In 2014, even scientists have a difficult time readily contemplating and getting a hold of these evasive, ephemeral particles.

They have to devise reverse engineering experiments to find and hopefully analyze these elusive building blocks of matter.

They have to start with the end product (matter) and break it down to reveal its fundamental components. For example, heat ice a little and you will get water. Heat water and you will get steam. Heat the steam and the atoms will separate into hydrogen and oxygen.

Heat one atom of hydrogen, and it will break down to one proton (its core) and one sole orbiting electron. At a microscopic level, Galacti tells us what we just accomplished — namely, splitting a hydrogen atom. This is equivalent to setting off a one-atom hydrogen fission bomb. Such a rupture, like an exploding building, releases the minutest specks of energy.

Only highly sophisticated cameras can visualize and record the trajectories of the sparks’ nanoseconds of existence. This is nuclear back engineering. Our Big Bang pinhead contains only the most basic particles: elementary particles. Scientists also call them “point particles,” indicating their indivisibility.

If you take a point on a piece of paper or on a computer screen, or one of the dots in Vincent van Gogh’s paintings and try to split it, you won’t be able to divide that dot. It’s the fundamental building block of whatever picture you draw, and of Van Gogh’s famous Self-Portrait. Likewise, point particles are the fundamental building blocks of all matter in the universe: quarks, leptons, and electrons.

Galacti whisks over to Geneva, Switzerland, and is on the scene one hundred meters below ground, observing the Large Hadron Collider, or LHC—a machine that enacts the most sophisticated gunfights more spectacular than any action film.

Picture two subatomic gunslingers facing each other and simultaneously shooting bullets inside a twenty-seven-kilometer circuit of pipes. The “bullets” are beams of protons. Each of the two gunslingers shoots these beams into the twenty-seven-kilometer racecourse, where powerful super magnets spin them until the protons are close to the speed of light—about one million times faster than Schumacher down the Monza straightway, the fastest on the F1 circuit.

Then they collide: wham! No loss of life, no injury—just a pyrotechnic show more precise and daring than the most magnificent special effects. The collision produces elementary particles like firework sparks. The diagram below details two main categories of elementary particles, quarks and leptons, each composed of six types or “flavors.” The two main categories of elementary particles, quarks and leptons, each composed of six types or “flavors.”

English scientist J. J. Thomson discovered the electron flavor in the 1890s, and quarks were confirmed in 1968. The last “top” quark was discovered in 1995, a mere twenty years ago.

The electron stuns Galacti, since this spotlight particle has an unusually long life span and is the senior citizen of elementary particles. He notes that physicists surmise they date back to the instant of the pinhead explosion. This is in total opposition to the infinitesimal fractions-of-a-second life span of all eleven other particles, which decay immediately after coming into existence.

The word “decaying” here does not mean decomposition or breaking it down into its components.

Remember: it is impossible to split a black dot, and it is likewise with quarks and leptons.

Galacti sees the eleven other flavors of elementary particles decay by joining with each other to create composite particles, the next level of building blocks, which he’ll cover in a moment.

Each of these point particles has its very own properties: Electric charge: positive, negative, or neutral charges attracting or repelling each other.

We are not going to go any further than this with details because this is not intended to be a scientific Explanation. We are merely showing that state-of-the-art technology and science genius have both uncovered the unimaginable and raised more questions.

We know what the basic building blocks are and that we can measure and analyze a lot of them and know their physical qualities, but who can say where they came from and why they have their specific properties?

Imagine the Unimaginable.
Can we know? Are there answers? Is there an answer? Is there one answer?

This post is an excerpt from chapter 1.1-2 of Inventory of the Universe.

Since you read all the way to here… you liked it. Please use the Social Network links just below to share this information from The Explanation, Imagine the Unimaginable: Big Bang