The Hydrologic Cycle Continues but Where the Water Goes has Changed. 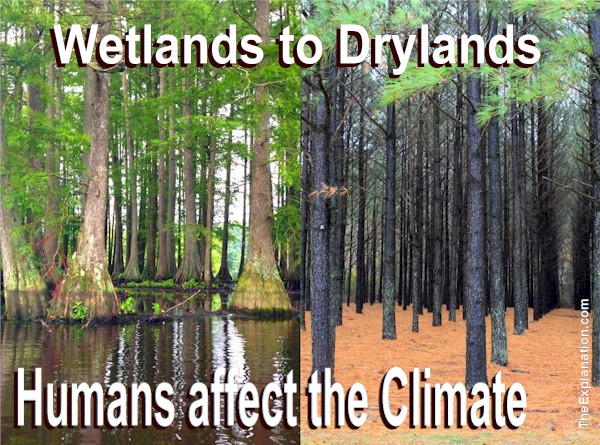 The hydrologic cycle continues unabated, but drying up and removing wetlands forces water to run off and accumulate where it wouldn’t usually go.

Human behavior does affect the climate, and it comes back to batter us like a boomerang.

The hydrologic cycle continues unabated, but where the water goes is another matter. Drying up and removing wetlands forces water to run off and accumulate where it wouldn’t usually go.

Water tells the story of humankind and Earth, it’s part of the hydrologic cycle. First, we are composed of water. Second, water shapes land both by years of erosion and by depositing sand, sediment, and salt in the shape of basins and river deltas and alluvial fans, which form deserts. Third, you can trace the migration of humankind throughout the world back to the rivers, seas, lakes, and oceans.
(Audit of the Universe chapter 3.1) 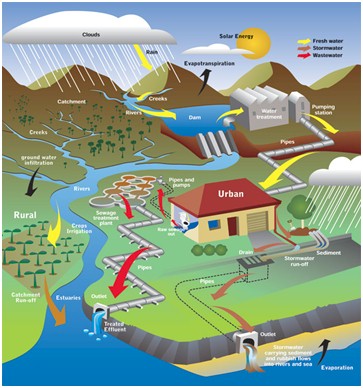 The hydrologic cycle, adding in the equation of human consumption.

We are at the Water Cycle Café, which to recap Inventory of the Universe, is a European or American-style diner restaurant that looks like the entire Earth, where air, water, and food interrelate and ordering, cooking, serving and disposal run on the hydrologic cycle: precipitation > canopy interception > snowmelt > runoff > infiltration > subsurface (groundwater) flow > evaporation > condensation > sublimation (absorption).

This time, however, the Café is closed. How can that be?  The water cycle never stops, does it?

We have never thought about the history of water in human civilization, in agriculture and industry, of humans as stewards of water. Yet, we are, and we have been for centuries.

Is the Water Café still viable?

How much of the freshwater in the world is accessible for drinking, bathing, washing, and all vital human activities? In other words, who has access to water? Would you believe that 11 percent of humanity, or 783 million people, has no access to clean drinking water?

Galacti, dressed in a waiter’s uniform, wonders, “There are finite, limited quantities of fresh water on the world menu. What are you humans doing with it?”

Consider that in Bangladesh, the country alternates between drought, with dams in India keeping water away from Bangladesh during the dry season, and rain. The country can be 70 percent underwater, imagine women washing and doing chores in waist-deep water. The Gorai River in Bangladesh/India is changing course in the dry season and drying up, so much that in a few more years, it will be permanently cut off from the Ganges, leaving many without water.

We view a protest by Bangladesh and Indian citizens who are fighting the construction of dams in India. We have never thought about protests over a river a world away for most of us. Human activities shape the environment, and the hydrologic cycle, sometimes in dramatic and deliberate ways with unintended consequences.

In the Water Cycle Café, a dam blocks the natural flow of the water. We meet an Egyptian official and an Ethiopian farmer. The farmer believes she and her people have a right to their share of the resources of the Nile, and she has petitioned her government to divert more of the Nile River. Thanks to a project named the Renaissance Dam, she’ll have more water for her fields and her neighbors’ fields, and more energy for her country.

“We have water for teff grass, the staple of Ethiopia that is used to make spongy injera bread, and energy, not necessarily for the people of Egypt,” Galacti announces. “That’s the blue plate special, 1,300 to 6,600 billion gallons of water going to Ethiopia and flowing out of Egypt—which has been getting the majority of the water since 1956.”

The Egyptian official strongly protests the move, aided in his protests by international agencies, and an official from Sudan rejects any Ethiopian claim to a greater share of the water.

Meanwhile, the international crusader Wikileaks reveals plans that the Egyptian and Sudanese governments have drawn up for a launching pad that will enable an attack by Egypt against the Ethiopian Grand Renaissance Dam. It, along with the other dams in Ethiopia, generate 4,612 MW of electricity, over double the Hoover Dam, which supplies a good part of California, Nevada, and Arizona.

Unlike coal-fired plants, there are few drawbacks to hydroelectric power—except, of course, in this case where there is armed conflict over water as a resource. The Egyptian and Sudanese officials must face the ire of the Ethiopian farmer and her neighbors, with whom they plead to support a new leader in Ethiopia that can resolve the conflict.

The farmer in Ethiopia is tired of having to scratch out a living in drought conditions. At the same time, the Egyptians enjoy the lush Nile River valley and the benefits the water brings (although the Nile is far from pristine). The Egyptians argue that they invented hydroelectric power and should have dams, although, in the region, Ethiopia is now ahead of Egypt in installed hydroelectric capacity.

“Besides, Ethiopia should remember that drought conditions are normal for the Sahel, in which the country is located, that’s just a feature of the property,” Galacti comments. “However, it’s not getting better, could the hydrologic cycle be responsible?  And who changed the hydrologic cycle?”

Climate Change and the Hydrologic Cycle

Severe weather changes due to human-made global warming are affecting the state of the world’s hydrologic cycle, which we have all seen in disasters such as, recently, Hurricane Sandy as well as typhoons in Vietnam. Global sea levels have risen between .2 and .5 meters between 2007 and 2012, with a projected rise of one meter or more by 2100. The flooding from ‘Superstorm’ Hurricane Sandy, we learn, was due in part to sea levels in the northeastern US rising faster than the river deltas in Southeast Asia. Water, essential for life, has become a fierce adversary.

Why have the oceans been rising? Let’s have a look at the hydrologic cycle. There is a significant point missing–those steps involving living beings, notably humankind. Plants and animals do not impact the hydrologic cycle negatively; only humanity does with the construction of dams, removal of groundwater from wells, water abstraction from rivers, and the loss of 60 percent of the wetlands in the past 100 years (1909-2009).

“No blaming city dwellers for the run on water,” Galacti announces. Worldwide water use figures show that far more significant quantities of water are used in industry (22 percent) and agriculture (70 percent) than urbanization (8 percent). In the US, Europe, China, and Mexico and around the world, farmers are encouraged to use up 70 percent of the water that overwhelmingly goes to agriculture, resulting in waste and inefficient practices, as the Aral Sea story below illustrates, or risk losing vital irrigation.

The café offers a bumper crop of corn for tortillas, papayas, grapes, strawberries, the fruits of this water usage.

This blog post is an excerpt from chapter 3.1 of Audit of the Universe

Since you read all the way to here… you liked it. Please use the Social Network links just below to share this information from The Explanation, The Hydrologic Cycle Continues but Where the Water Goes has Changed.