Human Needs, the Basics Each Person Should Expect 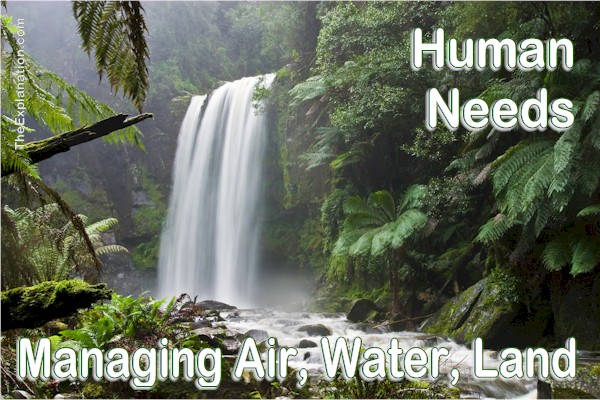 Human needs are what each human being, worldwide should be entitled to as a citizen of the world. Is Government providing these basics?

Human needs. How are we managing the air, water, and land we need to survive? Government means taking care of the basics.

Human needs are the most essential requirement each person on our planet can expect as part of the human race. Just like when a baby comes into the world there are certain essentials it needs, likewise with human beings. Those resources are present on the planet. The question is, are governments making the best use of them to assure the welfare of all their citizens?
(Audit of Humankind, chapter 4.4)

Peace and prosperity, and how to make that available to all of humankind is the goal The Explanation is out to reach. Only proper rulership, as one key ingredient, can ever help attain that lofty challenge.

In Paris, as I write in December 2018, the gilets-jaunes are in their fifth straight weekend of insurrection. There were fewer people roaming the streets with fewer arrests and fewer store windows shattered. I was in Paris last night and walked a side street leading off the Champs-Élysées. Three stores in a row, a money-changer, a car rental agency and a hairdresser had their storefronts scarred by varying degrees of damage and all will need new store windows. What a waste.

The big item now is the request for a RIC, a Referendum d’Initiative Citoyen. A referendum based on citizen initiatives. People will make suggestions and they will be submitted to the nation for a vote. The outcome would decide their application or not. This type of government can be referred to as Direct Democracy, the people have all the say. Sounds interesting, this could also closely resemble government BY the people.

I really don’t want to go into the pros and cons of such a system but I’d like to mention that since the beginning of the gilets-jaunes movement any leader that has come to the forefront has been disavowed and even been physically threatened as well as their family. With that in mind, just imagine the implications.

These are the three fundamental needs that every person on planet Earth should have the opportunity, not to say privilege and right to enjoy. The air, oxygen, we breathe, the water we drink and wash in and with. The food we eat which all comes from the ground underfoot or the water. For food, I’m going to consider the land rather than fruit, vegetables, and chickens. How many people benefit from the air, water, and land? You might be surprised.

Straight away we get into a huge question regarding these three fundamentals and government. What kind of rulership do we need to oversee these three fundamentals? Does, air stop over your lodging? Is the water you use in a closed circuit for your abode? Is the food you eat grown on your land? The answers are no, no, no. I could expand this to your neighborhood, city, state and even nation.

You can quickly gather that even Internationally recognized maritime limits of 12 nautical miles offshore established by governing bodies are tenuous at best. Because air polluted by one factory in one country ends up in another country, even halfway around the world. Plastic and trash dumped into the Pacific end up on USA West coast beaches. Polluted air, tainted water and food grown in chemically treated soil all end up in your nose, in your tap, and in your mouth. Imagine doing a referendum on any of these issues! Yes, that gets an exclamation mark.

At a minimum, we need national ministries for air, water, and land (food). This is the starting point to attain peace and prosperity. Having decent air, water and food is not prosperity, it is subsistence. But to walk a mile, you’ve got to take the first step. That first step is assuring that all people are beneficiaries of their fundamental needs.

These could all come under one label: ENVIRONMENT. Wow, isn’t that interesting? One of the most fundamental issues our world is facing today is the environmental crisis. Ecology is crying. Is humanity really making progress when such a fundamental issue can’t be resolved? As COP 24 in Katowice ended, the climate conference that started amid much hope and realization of the need to DO something. Here’s the conclusion from a Forbes report that you can read.

With the climate talks at COP24 in Katowice, Poland ending, the overall vibe regarding outcomes is grim, as described in a good overview by James Ellsmoor in Forbes. Staying positive and optimistic is challenging, but we have no choice and need to continue the fight.

Government needs a Ministry of Environment that has three interwoven branches. I discussed each of these branches at length in Inventory of the Universe. The uniqueness and abundance of each of these phenomena possibly only on Earth in the entire Universe, as we know of today. These three elements are what make Earth, Earth. There is not one single thing you can name that doesn’t come from either the atmosphere that cocoons us, the 71% of water-cover that makes us the blue planet and the 29% of land surface of only a 3% sliver is cultivable.

At the basis of real prosperity for each citizen of planet Earth lies their part of air, water, and land. When each person can benefit from a proper dose of each of these elements, then we can talk about the elimination of poverty. Unfortunately, national governments have got a long way to go before we begin to see real accomplishments. Audit of the Universe analyzes where we are today in these fields.

Hashtags pointing to specific articles in these three key areas reveal the state our planet is in today. Here are just six to get you started. Meditate on what government is doing to meet human needs.

Three years to safeguard our climate http://buff.ly/2u50p95 Can it be done? Here are their 3 keys to #success: First, use #science to guide decisions and set targets. Second, existing #solutions must be scaled up rapidly. Third, encourage #optimism. We’ll know by 2020 if the glass is getting fuller or emptier. #theExplanation #AuditClimate

State of the Earth’s Atmosphere – For Better or Worse? https://buff.ly/2hgaldv How, exactly, is #human needs#life changing the #atmosphere, and specifically the earth’s #climate, for ‘good’ or ‘bad’? #theExplanation #AuditAtmosphere

We Just Dumped 11 Million Pounds of Plastic in the Ocean https://buff.ly/2yndADo Tuesday’s The Explanation blog post focuses on the positive and unfortunately negative effect of what and how #water is a vector of #transport. This article shows the pros and cons of #BoyanSlat’s ‘#OceanCleanup’ project to start collecting #plastic from the Great #Pacific #Garbage #Patch. #theExplanation #AuditWater

Nourishing Water: Fish, Fishing Villages, Dead Zones and Shipwrecks https://buff.ly/2z73Kpp#Life needs nourishing on a daily basis. Physical #food to #fuel the body. #Oceans, #lakes and #rivers provide that. In the Gironde estuary near #Bordeaux in France we once produced caviar. No more, now it’s started again, in ponds. The #BalticSea nourished millions, no more. Attempts to revive polluted waters are underway but, as I often ask, is the glass of prosperity getting fuller or emptier? that’s what Audit of the universe is all about. #theExplanation #AuditWater

Developing countries: Growing threat of urban waste dumps http://buff.ly/2t5JWCF By 2025 it will be enough to fill a line of #rubbish trucks 5,000 kilometres long every day. This is a real down-to-conundrum. Some #cities have made great #progress to improve but globally who is facing this issue? #theExplanation #AuditPollution

Explaining the Deadly Sierra Leone Mudslide https://buff.ly/2vkbGS0 #Deforestation taking place on hilltops, clogged drainages and the removal of #mangroves are factors likely to contribute to future #flooding and #mudslides. We don’t see tree roots, but they hold #topsoil and #earth together. Is the glass of environmental care getting fuller or emptier? #theExplanation #AuditLand

As a part of these three major Government Ministries to meet human needs we could add the Ministry of Science. Of course, this could be part of the Ministry of Education. This where we have to consider verticality ad breadth of government. Earth Science focuses on these three main areas. Astronomy, climatology, hydrology, geology, volcanology and so many other fields dissect, learn and teach about how our planet functions.

Science and research have a great impact on industry. Their findings are often transformed into new processes for production of end products and consumer goods. Tires, computers, plastic and many other results of humankind’s inventive nature are literally strewn across the planet impacting air, water, and land.

Somewhere, at the beginning of this vicious circle, the idea and the experimentation took place to create this progress for humankind that has transformed our planet into a nightmare. Science starts out with theory but ends up with practicality, fulfilling human needs using planet Earth’s air, water, and land.

Planet Earth is fully, wonderfully and even amazingly equipped to furnish the human needs of its entire world population. Each human being can live in basic prosperity. But there has to be a properly balanced use of air, water and land resources to make that reality. The only way to make that happen is to have proper government to supervise such resources.

This blog post is an excerpt from chapter 4.4 of the book Audit of Humankind.

Since you read all the way to here… you liked it. Please use the Social Network links just below to share this information from The Explanation, Human Needs, the Basics Each Person Should Expect