Earth’s Firmament is its Atmosphere or Sky 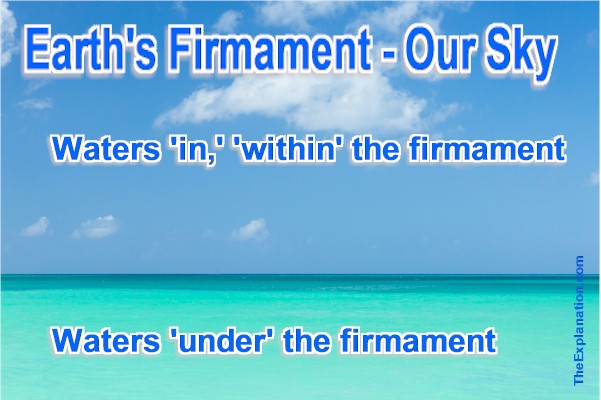 Earth’s Firmament definition is expanse meaning its Atmosphere or Sky. The Hebrew also indicates the waters were within and under the firmament.

Earth’s firmament, its ‘expanse’ as the Hebrew puts it. Earth’s sky or atmosphere IN which, and UNDER which, there is water.

Galacti is taking all of this knowledge about Genesis in, and, amongst others, two thoughts are befuddling him at this point: Apparently, no human exists until day six so there isn’t any eyewitness information before this. So, where does this account come from, and what can its value be? Secondly, there are but a few words covering significant phenomena, for instance, night and day involve the movements of the Earth, Moon, and Sun. These biblical explanations seem too simplistic.
(Origin of the Universe, Chapter 8.6)

Galacti’s observations are correct on both accounts and merit an explanation even a lengthy one, but we will keep it short. In the New Testament, Jesus’ words (we will be getting to Him in more detail later on) indicate Moses, one of the most prominent Old Testament figures as the author of The Law (Luke 24:44), which includes the book of Genesis. But he was not an eyewitness having lived hundreds of years after these events.

We could open a chapter, or even a book, about the writing and preservation of the Bible and develop a subject known as canonization. We won’t, suffice to say that just as you do not yet have the final picture composed of the pieces we’re putting together, similarly you’ll have to take the written word for what it says right now, or consider it a story. Just daily chronicles as pieces of the puzzle. Give it time, plenty of time, and take it one step at a time.

There is a biblical answer to Galacti’s uncertainty and reservation. “Through faith we understand that the worlds were framed by the word of God, so that things which are seen were not made of things which do appear” (Hebrews 11:3). There are processes and things that we cannot prove scientifically, that’s where the element of faith comes in.

From where does faith, or belief, come? Paul answers, “So then faith cometh by hearing, and hearing by the word of God” (Romans 10:17). You believe that assembling 30,000 strange looking car parts in a warehouse will produce as a fully working car. Maybe you’ll have a little more faith in what we cannot prove when you see the parts of the Bible puzzle assembled. They’ll form a coherent picture of planet Earth with humanity, and how to reach peace and prosperity, I consider my role, that of The Explanation, as merely letting you hear the word of God. More likely read, but maybe I’ll get into video and podcasting, and you will be able to listen to the word of God as well literally.

Now for the second point. The simplicity of expressing the creation. The simplicity of E=mc2. The most complex presented in the most minimalist, clear-cut terms. Mathematicians talk about the beauty and poetry in equations. We can mention Occam’s Razor here: A law of parsimony, economy, or succinctness, why do we want to complicate matters?

Let me add another point I will expand on at the end of Genesis chapter 1; this is like the time and place-setting of a movie. In the first scene, it zooms in on a city or a ship or through an apartment window, so you know where you are. It might even have some text: Paris 1936.

This short expose in Genesis 1 is to set the time (after the chaos caused by the downfallen Lucifer) and the place (on a restored Earth), revealing the props on stage and how they got there. It sets the stage. That’s somewhat simplistic because, as we’ll see, it’s quite a stage.

This short expose in Genesis 1 is simply to set the time (after the chaos caused by the downfallen Lucifer) and the place (on a restored Earth), revealing the props on stage and how they got there. Click To Tweet

In this creation story, we are being given practical facts with expressive vocabulary. The Hebrew wording, as we have seen and will continue to see, is expressing both physical and spiritual concepts. Two for the price of one. Technically and spiritually correct.

Day 2: Firmament with Water and Water under it

The 2nd-day account is another example of this brevity with spiritual overtones.

What we have here is a clear separation of the water (the Hebrew for divide (בָּדַל bâdal) is identical to dividing light from dark in verse 4). We have a concise but very distinctive description of the delimitations of water on Earth and water in the sky (see Further Study below); this perfectly reflects the reality of the role water plays in Earth’s environment today and in the past. Do you hear the reality, as Paul said? How does Science explain the origin and disposition of water?

Furthermore, there’s an essential zone between these two watery expanses that cannot go unmentioned — that zone where humankind can live in tranquillity. Imagine living in a continual mist, some areas of Earth, like Grand Banks in Newfoundland, Canada, do have extreme humidity and even mist making daily chores more arduous. Referring to the water cycle in Chapters 4 of Inventory of the Universe and Audit of the Universe, these two expanses (on Earth and in the atmosphere) cover the entire water system of the earth.

They include all the intricacies of their interdependent processes like evaporation (heading for the upper water layer in the firmament) and precipitation (returning to the lower water level on earth). Not only that, but it points globally to the importance of the water under us, which we use daily to drink and wash.

Consider the zone between the water below and above. We’d refer to this as humanity’s environment; this, too, was brought into existence with its intricacies including the setting up of the essential oxygen, nitrogen, and other gas cycles so necessary for life on earth. As I write this post, headlines are screaming about a possible underground lake of water on Mars. We are searching for planets with water, that’s important, but what we need is a water cycle. Otherwise, how are we going to grow crops? Oceans are regulators of the carbon dioxide-oxygen cycle, so we have enough oxygen to breathe. Oceans absorb 50% of the carbon dioxide. Just having water, with no cycles is useless to sustain life.

We found an underground lake of water on Mars, that's important, but what we need is a water cycle. Otherwise, how are we going to grow crops? Water, with no cycles, is useless to sustain life. Click To Tweet

Oxygen and freshwater are the most vital elements for survival, physically, a lack of oxygen will kill us within a few minutes, lack of water rapidly causes dehydration and can cause death in a few days. In preparation for the arrival of humans, breathable air and potable water, these two physical musts, were regulated on the second day.

The movement and turbulence of hot air, its property of conveying water to the above expanse, supplies us with precipitation, very timely and vital for our crops of rice, wheat, vegetables, fruit.  Without getting into it now, lower water for drinking, cleansing, and upper water for seasonal rains have major spiritual counterparts, of which I will remind you when we broach those subjects.

Man’s most fundamental needs, both physical and spiritual, as we’ll elaborate shortly, light/warmth, air and water each with its own cycles, all with their intertwined cycles are summed up within these first two days of creation. We and science know the mind-boggling intricacies. We can measure them and even try to make predictions about air and water cycles via meteorology with more or less success. But, it only reveals our tininess, our petitesse concerning these imposing, majestic phenomena.

Science, however, cannot tackle the issue of where these INanimate phenomena, these brainless marvels originated. Nor how these intricate, interrelated neuron-less processes were initiated and blended into a planet-wide synapse-less coherent system. Such a question, let alone the answer, is so far beyond comprehension that all we can do is speculate. Think about that. Do you hear the words in the Bible?

This blog post is an excerpt from chapter 8.6 of the book Origin of the Universe

Reading Genesis 1:7, we read: “…divided the waters which were under the firmament from the waters which were above the firmament.” It gives the impression that water is ABOVE heaven (firmament), which is not the case in reality. Water is IN heaven; it’s IN Earth’s atmosphere, the sky. In Genesis 1:20, the same Hebrew word al here translated above is there translated in, which is the reality we witness today. 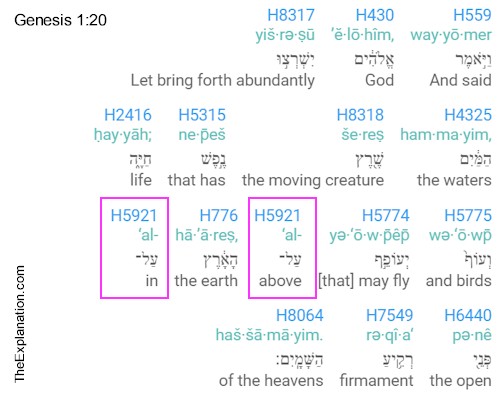 Genesis 1.20 shows us that the Biblical Hebrew word ‘al’ can be translated both with ‘in’ and ‘above.’ The reality is water is ‘in’ the firmament, Earth’s atmosphere.

Genesis 1:20 reveals that the same Biblical Hebrew word al can be translated as both in and above. The context displays that here. The water is not above the firmament; it is in the firmament, the expanse above Earth we call atmosphere or sky.

Since you read all the way to here… you liked it. Please use the Social Network links just below to share this information from The Explanation, Earth’s Firmament is its Atmosphere or Sky