Theory of Everything. The Equation that Escapes Science 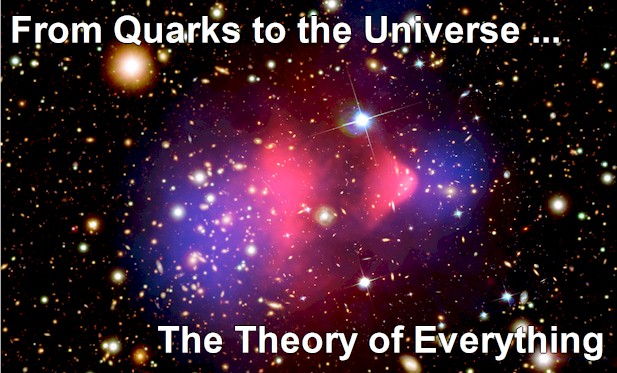 From miniscule quarks to the vastness of the universe, from tiny to humungous, how do you explain it? The Theory of Everything. From Quarks to the Universe, from the tiniest to the hugest. How did it happen? The Theory of Everything. (credit: Wikipedia)

Galacti muses over a few simple questions based on proven scientific fact: How can an ever-expanding explosion come from a pinhead? If there are four forces that govern the explosion, what is the force behind this phenomenon, the force that caused the initial inflation of the universe?
(Inventory of the Universe, chapter 1.10)

In other words, why wasn’t the explosion of elementary particles homogenous like a bowl of creamy asparagus soup (Galacti’s favorite), but rather like chicken soup, with bits and pieces agglutinating and floating all over the place? And how does gravity play a part?

To begin to answer these questions, Galacti completes his diagram from the “digital library” of the universe by presenting the four forces that govern our entire universe from the most miniscule to the most gargantuan (see diagram below). In particular, we can see that gravity has been added to the Grand Unified Theory to produce the theory of everything.

By contrast, in 2013 scientists admitted that they may never attain this perfect mathematical equation that fuses the four forces into a coherent Explanation of how the universe functions.

Simply explained, the problem is that if we apply the micro forces’ math to the macro bodies, planets would collide with their suns! As astronomy professor Dr. Pamela Gay is fond of saying in the weekly podcast Astronomy Cast, “The math breaks down.”

We know it works, but we don’t know how it works. So far, the theory of everything is an elusive theory with a sense of assumption and conjecture. This is not to say that it doesn’t exist, as scientists might actually prove it, but as yet no one has discovered a convincing Explanation.

Let’s add a thought to this. The theory of everything refers to our physical, visible universe. That which is observable, testable, and measurable. Anything metaphysical is outside of this theory.

I’m not alone in this: every scientist discussed here, including Einstein, Arno Penzias, and Robert Wilson, shares this behavior and these thoughts. By reading this book, you show that you do as well.

As I mentioned to Galacti, our goal is to break the “métro, boulot, dodo” workaday experience and expand our horizons, as well as open our mindscape to wider perspectives.

The Galacti perspective shows us that the world doesn’t revolve around you or me or us. We’re participating in a cosmic story, and yet we don’t know what it is! We’re adrift in a sea of phenomena.

An instant before Big Bang, these phenomena weren’t there. An instant later they existed, and they do exist now.

As invisible as they are, they are real. They gave rise to point particles, quarks, leptons, protons, atoms, molecules, elements, land, water, air, flora, fauna and . . . you and I. But no authority can tell us conclusively why or how—and everyone on Earth believes different authorities.

Science gives us the big physical story of where the Earth and sun will be in five billion years.

Religion tells us that only those that belong to their religion will be in some sort of heaven.

Some schools of philosophy tell us that our existence is here and now, and that there is no future beyond this life.

Leaders in society are interested in today and the immediate future. Their mandates are at the maximum for their lifetime.

One-billionth of a second prior to Galacti’s post-Big Bang broadcast, that dot containing the primordial soup with the conditions for life in this universe didn’t exist.

Why? Give us The Explanation.

Be prepared to pull up anchor for our voyage. Rather than being adrift, we are setting sail through the phenomena of the universe.

This post is an excerpt from chapter 1.10 of Inventory of the Universe.

Since you read all the way to here… you liked it. Please use the Social Network links just below to share this information from The Explanation, Theory of Everything. The Equation that Escapes Science