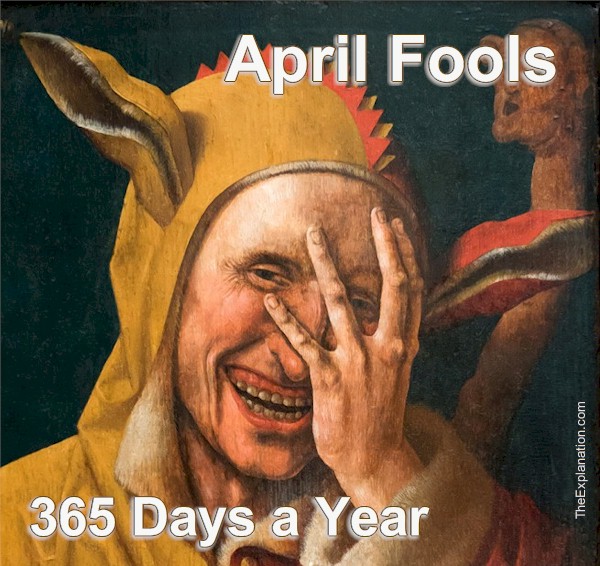 April fools day is a day of hoaxes. Tricking anyone by feeding them make-believe truths. Nowadays, we call this fake news.

April fools – 365 days a year. Are we being fooled by the information we’re being fed?

The origin of April Fools is a bit of a mystery. One story was that during the days of Constantine the Court Jesters suggested to the King making one of the Jesters King for a day. Constantine accepted. This jester, named Kugel, proclaimed a day of fun and pranks!

This story was actually published by the Associated Press back in 1983. The only problem was, the story was made up by Joseph Boskin, Professor of History at Boston University. It was an April Fools hoax. It was funny to everyone, except the AP editor, who was furious and said Boskin had told a lie.

We’re discussing how human beings reason. How we think and analyze facts to draw conclusions. There are a number of interesting parallels between this April Fools story and each of us with regard to our thinking process.

Whether it was a lie or not, a joke or not, Professor Boskin said that it was AP’s fault for not checking the story. Had they done so, AP would’ve known that there was no record whatsoever of this episode anywhere else. They’d have had to go back to Boskin to request the SOURCE of the story … at which point Boskin would’ve probably told them the truth.

Thinking and reasoning start by verifying one’s sources. Is the basis of my information correct? Are my facts rock-solid? Unfortunately, today the source of a good number of people’s information is Social Media. Users are in a closed circle, a lot with the idea that if it’s on Twitter and Facebook, or even, in the news, we can take it at face value. Well, no you can’t, you’ve got to go back to the source.

There are people who specialize in spreading false information on Twitter, the ideal network for spreading misinformation. In fact, a study shows that that erroneous information spreads much quicker than truth. Information can spread mouth-to-mouth, error mushrooms like a wildfire.

Checking one’s sources for basic information and real facts can be a very difficult undertaking. Why? Because in basic areas of science and religion there are some fundamental differences that literally cleave these two disciplines apart. The age of the Universe, the theory of evolution, not to mention the existence of God and miracles. These are basic issues that are very difficult to resolve. The Explanation will help you with these subjects as we proceed further with our investigation. Of course, these are very complex compared to the origin of April Fools. Nonetheless, the principle of verifying one’s source is identical.

Back at Associated Press, the fact is they do check the sources of their news. Given the state of affairs with fake news and conspiracy theories, most serious news agencies, broadcasters and authors have had to put in place whole departments devoted to just this purpose. But the fact is the April Fools story got through the cracks.

AP was embarrassed and after a few days retracted the story. The journalist had to face a hard time with his boss but got over it and went on to teach journalism himself. No doubt, this experience served a very powerful journalism lesson.

Professors shouldn’t tell lies. Sure, it was a joke, but see the consequences?

You know what. How do you know the professors in your life, those that you look up to and count on to give you valid information, are not telling you jokes? What’s their source of information? This can refer to anyone who is in a teacher, explainer position. Me included.

Both the purveyor of false information and the receiver are going to be embarrassed and have some REthinking and REorganizing of their minds and worldviews to do.

The fact is, a false premise is a gateway into a labyrinth of false directions. It is often difficult to extricate oneself from such an entagled maze. False premises are the demise of responsible reasoning.

In this chapter about how humankind thinks and reasons, we’re going to be taking an up-close look at observation, philosophy, science, and religion. The idea is not to denigrate any of them. These disciplines are all necessary and worthwhile. The problem arises that within each of these four learned bases of reflection there is so much confusion, opposition, and in-fighting. It’s like a labyrinth and extremely difficult to find one’s way back to the false premises.

Each of these specialties has its array of experts. Even they disagree among themselves, but they are very convincing and have the Ph.D.’s to bolster their teachings. I agree it becomes a daunting experience to reevaluate one’s bank of knowledge. It’s like taking a house apart, brick-by-brick. You’ve even got to dig up the foundation and put down another, more solid structure.

As we grow up, with our inherited traditions, education, and culture the foundation and bricks of our house are automatically erected for us. Before we know it and can independently ponder it, our mind is filled with a shaped edifice of knowledge. In fact, we might not have given it much thought. We might not have questioned its source and coherence.

It takes courage to look squarely at one’s belief system and put it to the test. It takes nerve to look at one’s stances on science and religion and ask, why do I think that? What’s the origin of that idea? How do I really know this is a fact? Am I the brunt of some April fool prank?

When you listen to someone with a different opinion than you, someone who is teaching something different from what you’re used to, how do you react? It is so easy to reject it simply because it doesn’t agree with your frame of mind. That’s just rejection, that’s how a lot of people think. That’s not reasoning.

It means setting aside the bricks that don’t fit into the schema you’re building. You don’t discard bricks of knowledge because you don’t understand them, that’s being an April fool. Like a puzzle, you wonder how and where they fit. That wonderment might last a long time. You might need other facts before you can assemble that part of the puzzle. You can’t pick and choose which real facts (that’s an oxymoron. Either it’s a fact or it isn’t) you want or don’t want, that’s also being an April fool.

Here’s a fact I faced. Science tells us that the outer extremities of our Universe are expanding at a faster and faster rate. That, in itself, is worth a lot of thinking. It’s said this universe has been expanding for 13.7 billion years. I realize there are many who don’t believe either the 13.7 billion years and/or the expanding universe (either you are or I am going to be an April fool). That said, whichever way you look at the expanding universe, you’ve got a perpetual motion machine if you ever had one!

This is a problem for science because the Second Law of Thermodynamics says you can’t have a perpetual motion machine with a closed, finite source of energy. Consequently, the expansion of the Universe should be slowing down, but it isn’t.  For it to expand somehow there has to be a source that’s feeding it energy. Scientists have dubbed this dark energy. For the time being, they are stumped as to what it is.

Although calculations demonstrate, it represents 68% of the energy in the Universe. Amazingly, 68% is a big, big percentage. Science knows it’s present. Present scientific explanations are at a loss. They might figure it out in the future, just like they might figure out the Theory of Everything.

Science doesn’t talk about that question much. Religion, Philosophy, and Observation all have unanswerable questions, oppositions, and contradictions. This is the result of how humankind reasons. Whichever way the penny falls, there are going to be quite a few April fools. Will you avoid that bonnet?

This blog post is an excerpt from chapter 5.2 of the book Audit of Humankind.

Since you read all the way to here… you liked it. Please use the Social Network links just below to share this information from The Explanation, April Fools Day – 365 Days a Year