Where do National Borders Originate? The Amazing Coincidence 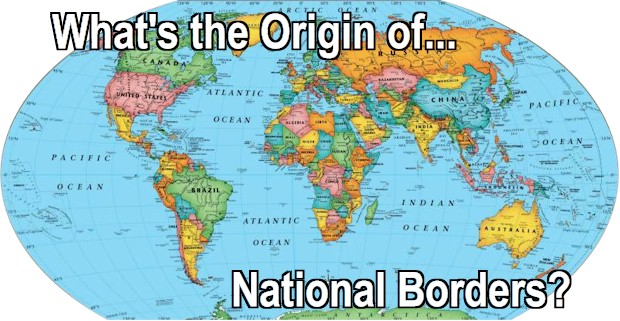 Have you ever looked at a world map and wondered how the nearly 200 countries and their populations ended up in their specific locations with their specific national borders and traits?

In light of the stirring migration headlines and graphic images that stun us practically everyday it might be worth thinking about. There are almost 200 independent countries around the world today. What is the origin of their national borders?

This might not be an easy subject to approach because we have to ask hard questions and poke into areas that maybe we’d prefer to leave untouched. When people and nations clash, sensitive issues rise to the surface and we are faced with looking at them or sweeping them under the carpet.

Look at the map above. Most of us can’t name the 196 independent countries around the world, let alone situate them all on a map. But within them live the 7 billion worldwide population.

How many are migrating … on the move between countries? According to the United Nations Population Fund, it’s a huge number:

In 2013, 232 million people—3.2 percent of the world’s population—lived outside their country of origin. The majority of migrants cross national borders in search of better economic and social opportunities. Others are forced to flee crises. Internal migration within countries is also on the rise.

The magnitude and complexity of migration makes it an important force in development and a high-priority issue for both developing and developed countries. The fact that almost half of all migrants are women, most of reproductive age, is another reason this is a pressing issue for UNFPA.

UNFPA works to increase understanding of migration issues, advocate for better migration data, and promote the incorporation of migration into national development plans. UNFPA also advocates for addressing the special concerns of women and other vulnerable migrants, and works to meet the emergency reproductive health needs of refugees and internally displaced people.

That’s almost three-quarters of the entire population of the United States on the world’s pathways, looking for a new home, a new life. Leaving their roots behind and crossing their national borders into unknown, for them, territory.

That migration at such levels takes place, and that it is accelerating in the Middle East, Africa and Eastern Europe into Western Europe has been the focus of increasingly nasty debates. Myriads of ideas, concepts, supposed solutions sweep across homes, bars, governments and parliaments … with no coherence in sight.

The Explanation doesn’t have a solution to the present dilemma; The Explanation is here to help understand the roots of this situation and show how it will be solved … in a global solution. As the UNFPA points out, migration is a huge problem … but by no means the only fight on their hands:

One of the most significant changes in migration patterns in the last half century is that more women are migrating on their own than ever before. Women now constitute almost half the international migrant population, and in some countries, as much as 70 or 80 percent.

Since women migrants frequently end up in low-status, low-wage production and service jobs, and they often work in gender-segregated and unregulated sectors of the economy, such as domestic work, they are exposed to a much higher risk of exploitation, violence and abuse.

Women migrants are particularly vulnerable to human trafficking for the purposes of sexual exploitation, a multimillion-dollar business. Trafficked women are exposed to sexual violence and sexually transmitted infections, including HIV, yet they have little access to medical or legal services. –

Whether it’s weather conditions, war, famine, land erosion or terrorism that causes people to get up and go, it’s clear that without global solutions to ALL these questions people won’t be satisfied living in such dangerous or inhospitable conditions.

Yes, The Explanation seeks the global solutions, hence its basic and direct question: Where do national borders come from?

Unfortunately, I’m not going to give you an answer to that question … even though there is one. What I’m going to do is leave you with something to think about.

A headline in the Daily Mail of 10 September blared out: Is this the first human? Extraordinary find in a South African cave suggests man may be up to 2.8million years old. The general consensus is that man came out of Africa.

I submit to you a short map of the world today focused on the Middle East (the blue circle) and ask you to think about an interesting point to do with the ‘whereabouts of nations and races’. The Middle East appears to be the central point, in essence, the sprouting or axial point from which the major types of peoples developed: Asians, Africans and Europeans. Four key world geographic regions. The Middle East central core from which Asia, Africa and Europe spread out around the world.

If you think about the Americas and Australia, notwithstanding their original populations, which is another subject, they are all basically inhabited by descendants of Europeans.

Nations are grouped together within these three main categories. One could even say that there are ‘natural physical barriers’ that end up as natural separators. Of course, in the 21st century, and with man’s motivation, none of these barriers are impassable.

That’s all I’m going to say for now. The Map speaks for itself. It’s your turn to think. Is their meaning to this?

Since you read all the way to here… you liked it. Please use the Social Network links just below to share this information from The Explanation, Where do National Borders Originate? The Amazing Coincidence