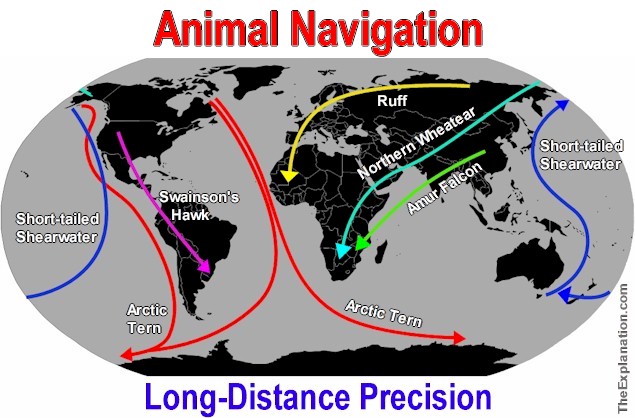 Animal navigation, with long-distance precision, by creatures with miniscule brains defies both the human brain and imagination.

Animal Navigation, long-distance precision by various species of birds. Around and around the Earth they go.

Animal Navigation senses wind to reach its destination without fail. Inside the fruit fly haven, dozens of red-eyed flies embark on their paths, testing the wind with the miniature “sensor instruments” at the tip of their antennae.
(Inventory of the Universe, chapter 6.4)

If we were to peer inside the fruit flies’ brains, we would see signals indicating the wind is blowing in a particular direction (southwest, for example) traveling from the miniature antennae’s anemometers.

Animal navigation within the fruit flies allows them to use this information to make and alter their flight plans. A fly’s brain is not complex, but the fruit fly still possesses this “anemometer” in order to fly and survive.

Animal navigation, directional sense endows other animals as well. In one enclosure, a mother rat tends to her newborn babies, but the pink hairless creatures don’t need much parenting. Eyes open, they scurry southwest to a pile of grains and some cheese chunks Galacti has left behind.

Even though they can’t possibly explore their environment as newborns, they come into the world with built-in animal navigation, a “GPS,” that is, they have the same directional signals as an adult rat. The adult and newborn rats gobble up the food in no time.

These rodents have other intriguing abilities. They see poorly, yet we notice the adult rats’ whiskers twitching and dancing. Galacti plunges the enclosure into darkness, but we can still see thanks to a faint light that tracks the rats’ movements.

If the rats are born with a GPS, the whiskers are miniature radar homing in with perfect accuracy on anything edible. Rats are not the only creatures possessing this ability; the star-nosed mole can create a detailed map of its area using the twenty tentacles snaking from its nose.

We’ve never paused to think about rats, moles, and their capabilities. Many of us in the group prefer to avoid rats whenever possible! However, we’re humbled to think that a creature with a reputation for carrying disease has mental capacities beyond ours.

Baby rats have survival skills and mental abilities beyond those of newborn humans who have larger brains! How can this be? Specifically, baby rats can navigate and have the ability to sense direction even in the dark.

Baby rats have survival skills and #mental #abilities beyond those of newborn humans, who have larger brains! How can this be? Click To Tweet

Animal navigation is also a skill displayed by the monarch butterfly, a seemingly delicate and fanciful creature. Much has been written about the migration of the monarch butterfly. As we step into a “butterfly house,” we have to take care to shut the door so that we don’t release the dozens of monarch butterflies fluttering around the trees, flowers, and airspace.

They are feeding on milkweed, their favorite food, and general nectar plants. Sunlight streams into the habitat and dozens of butterflies take flight in a cloud, escaping through an opening in the ceiling. A camera inside the house allows us to see the butterflies traveling southward, filling the skies. This is the first step of their annual two-way migration.

Each October, before the weather becomes too cold for survival in the northern United States and Canada, the butterflies travel thousands of kilometers to Mexico, California, or Florida—the longest migration of animal navigation on record. On the camera, we see an accelerated, simulated version of the butterflies’ flight south to their wintering grounds, which includes their famous nesting site in the oyamel fir trees in Angangueo, Mexico.

The butterflies fly up to twelve miles per hour by floating on the wind and using their strong wings to make this long commute. Multiple generations make this journey. Since the Monarch butterfly’s life span is only two months, no butterfly makes the entire round trip. Female monarchs deposit eggs en route, and the last generation to make the trip does not reproduce until it reaches the Mexican oyamel fir trees.

In essence, the monarchs can delay reproduction until conditions are ideal and they are safe in their “vacation spot.” This new generation continues the homeward leg of the migration, with no input from their parents.

The migration is essential for the butterflies’ continued lifecycle as they travel from the dormant flowers in the North and pollinate flowers en route, at the same time feeding on milkweed and receiving essential nectar for the winter.

This migratory pollination ensures the survival of both the flowers and the butterflies. In the spring, the butterflies return north, unerringly coming back to their point of origin.

How does the butterfly do this? We humans need a map, radar, signs, and directions for long journeys even though we eventually learn a preferred route. For the butterflies, the sunlight is the key. It triggers the butterfly migration in a real sense.

As scientists have discovered, the butterflies’ bodies regulate production of an internal hormone called Arabidopsis cryptochrome 2, or “CRY2,” which allows them to gauge how much daylight they need to make their long migration. It also helps them sense the Earth’s magnetic fields.

Thanks to the circadian clock in the butterflies’ antennae, a mechanism of chronobiology that guides the butterflies’ sense of time and activates because of the CRY2 protein, generation after generation navigates successfully to the ‘winter home,’ while the second, third, and fourth generations return north.

As we think about the butterflies’ navigation, we can also understand the benefits of it. Flowers are pollinated, species survive, and new evidence even suggests that migration helps the butterfly avoid infection by a specific single-celled parasite.

The butterflies’ routine seems so precise and carefully planned. It’s as if the butterflies have their own kind of intelligence that allows them to plot the best route to their wintering grounds in the same way that you or I would when traveling from Edmonton to Tahiti for the winter, or from Norway to the warm Greek Isles.

However, the butterflies seem far more delicate and vulnerable than an airplane, for example, and have only their own resources. This mass migration has fascinated scientists for that very reason. It intrigues us now. It is a demonstration of remarkable animal navigation liked to chronobiology.

Even the way the butterflies glide on the wind deserves observation. We feel a sense of envy watching their fluttering movements. It inspires the same meditation as watching the hummingbirds in an adjacent sanctuary fly backward, hover, and feed off flowers dancing in the wind.

Only high-speed video can capture their flight and show the hummingbird’s shoulders moving in a figure eight to create those graceful movements. Why should hummingbirds be the only bird that can hover on the wind? Is it because they have no place to perch on the flowers? Why are they predisposed to this behavior? We know that we could not replicate their feats or their efficiency.

This post is an excerpt from chapter 6.4 of Inventory of the Universe.

Below is a video about animal navigation. There’s a lengthy intro which (it discusses human navigation, or lack of it due to smartphones…) you can skip it by going to 19 minutes. This video can be a bit technical but it will give you insight into just how ‘technical’ sun, steller, light polarization and geomagnetic navigation can be. And how animals, without any instruction or example from their progenitors can cover thousands of miles over unknown territory using a combination of these ‘compass’ methods.

Earth is one big magnet and animal navigation uses these magnetic fields for long-distance precision. This 3 minute video below tells you about magneto reception, the ability to detect and navigate by magnetic fields. Also learn about Cryptochrome known as CRY2, a light-sensitive magnetic sensor.

Since you read all the way to here… you liked it. Please use the Social Network links just below to share this information from The Explanation, Animal Navigation Defies the Human Brain