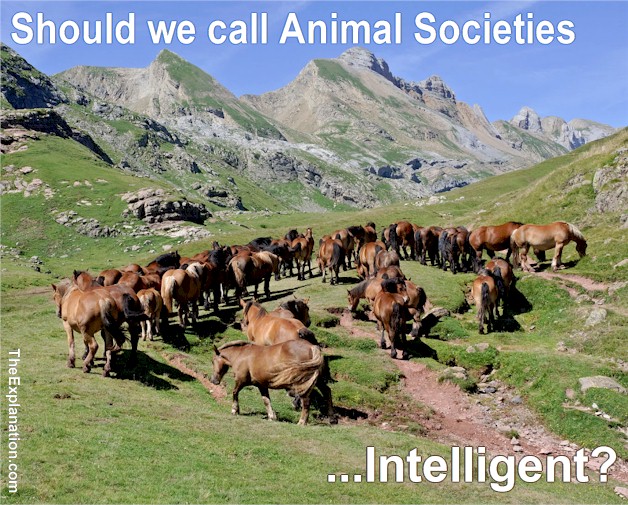 Animal Societies – Ants, Apes Fish and even Bacteria Organize their own Communities to obtain Favors and Benefits.

Animal Societies – Ants, Apes Fish, Horses and even Bacteria Organize their own Communities to obtain Favors and Benefits.

Inside one of the glass enclosures, hundreds of ants swarm along a superhighway network of leaves and tree branches that connect soccer-ball-sized nests. We read the placard on the enclosure: Weaver Ant, Southeast Asia and Australia.
(chapter 6.3)

As we watch the ants, we notice that they link with each other using their red-brown antennae, their mouths, and their legs. Ant interaction in animal societies is an elaborate dance of using antennae to grasp each other’s antennae or touching each other with mouths or legs.

They are “friending” each other. They stay in sync through these gestures and signals, and they create their own social organization. As they communicate, these animal societies plan tasks such as sewing leaves together to make nests. To create the nests, the ants form a chain in order to grasp leaves.

While these workers hold together the nest, other workers arrive carrying pale white larvae. Since the larvae secrete silk, they are of use here. The worker ants tap the larvae on the head, which prompts the larvae to ooze gobs of silk out of their jaws.

In essence, the workers use the larvae as glue guns to seal the leaves together. Other ants are forming “air bridges” between trees so that their nestmates can cross. We watch animal societies construct projects like “urban planning,” and even ritual dances that warn of an approaching enemy beetle, which also becomes food once the weaver ants organize a hunting party.

Bacteria are also organizers, and they form a World Wide Web. That surprises our group. How can organisms living inside us and dwelling on common household surfaces (as well as everything we touch) organize without brains? Singlecelled organisms don’t seem comparable to networked computers. We’re taken from the weaver ant display to an exhibit called The Bacteria Network.

Giant “microscope glasses” that look a bit like 3-D glasses allow us to see what would normally be invisible to the naked eye: a billion and more bacteria, specifically the infamous E. coli bacteria, moving along and reproducing by dividing.

Just one of these unicellular organisms can divide every twenty minutes and produce five hundred billion billion bacteria. Each one of the bacteria can “converse” with the other bacteria and its related species, that is, the bacteria can communicate using chemicals.

To illustrate this point, our microscope/3-D glasses detect colored trails representing chemicals being exchanged among the bacteria. The E. coli bundle together in a phenomenon known as “swarming,” and the chemical exchanges come at a furious rate. Moreover, we can see all kinds of activities corresponding to the exchange of the chemicals.

For example, a bacteria pair exchanges genetic material, and we detect the same activity in several such pairs. The bacterial communication seems orchestrated, organized, and planned as they form biofilms, which are bacteria cities, or perhaps communes.

We normally don’t like to think about bacteria, and we avoid them at all costs by using antibacterial wipes and gels stationed in hotels and our local supermarkets.

Certain bacteria called lactobacillus have positive functions, such as helping to create the smoothness of the yogurt one of our travelers is eating as a snack. There’s also cyanobacteria, which exist in every crevice on the planet. They help nurture life by contributing to the process of photosynthesis.

When we think about all the disease bacteria carry, exchange, and spread through these processes we’re watching, however, we wonder why a potentially deadly creature has the ability to “network,” share information, and even assist in our DNA exchanges, as well as giving rise to the geologic landscape!

While we’re thinking about this question, consider this: cyanobacteria are an excellent example of chronobiology, which we discussed in the last chapter. Since bacteria are unicellular and have a short life span, scientists dismissed the possibility of a circadian rhythm.

However, cyanobacteria do operate according to an “internal clock” and certain strains reproduce by dividing every twenty-four hours, while others do it every five to six hours! Even bacteria have this sense of time, even more accelerated because of the need to reproduce by division. As we think about the chronobiology, which is almost elegant in such a simple organism, we watch as the cyanobacteria exchange chemical signals with each other.

They even receive genetic material from the E. coli! Similar processes are taking place inside our own bodies with the bacteria that make up a mind-boggling 90 percent of our cells.

Should we call bacteria and other animal societies intelligent? Perhaps. Why do they seem to have awareness and an ability to organize in the most efficient sense at the cellular level?

Should we call #bacteria and other animal #societies #intelligent? They have the ability to organize in a most efficient sense. Click To Tweet

We’re fascinated, and yet we’re compelled to move as far away from the bacteria exhibit as possible and on to the Navigators section.

This post is an excerpt from chapter 6.3 of Inventory of the Universe.

Ants, apes, monkeys and even fish organize their communities for their own benefits and even those of others.

Below are a couple of videos

Animals rarely live on their own. They live together for a few reasons. One of the major reasons is to keep each other safe. That’s Animal Societies. A society is a group of organisms that live and work together in harmony… more or less. Here are a few different animal societies.

Since you read all the way to here… you liked it. Please use the Social Network links just below to share this information from The Explanation, Animal Societies – Exceptional Community Organizers