The Innate Capabilities of Animals leave Human Swimmers in their Wake 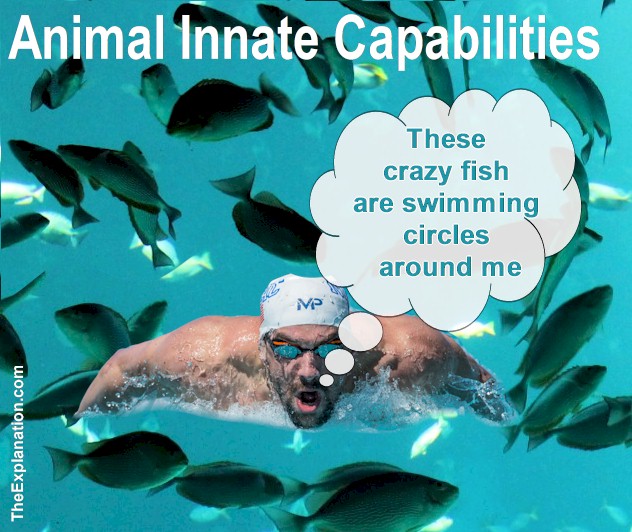 The innate capabilities of sailfish (109 km/h) let them swim circles around Michael Phelps (7 km/h) at any Olympic Games.

The innate capabilities of sailfish (109 km/h) let them swim circles around Michael Phelps (7 km/h) at any Olympic Games.

Michael Phelps’s world record Olympic medal performance in the 200-meter butterfly (timed at one minute and forty-two seconds) calculates out to seven kilometers per hour (over 4 miles per hour). Animals can naturally swim circles around Michael Phelps.

Some of our group has strayed into the aquarium, where they are watching the spiny dogfish shark. Its enameled scales have inspired the Speedo Fastskin II swimsuit and reduced the strain of swimming as well as the drag on swimmers’ bodies.

At the 2004 Summer Olympic Games, both the neck-to-ankle and standard swimsuits with sharkskin-mimicking bumps and ridges technology helped athletes win fortyseven medals. Sharks seem formulated to swim quickly, so you cannot outswim one.

Biologists at the British Museum crafted a suit to help humans have an advantage that sharks possess naturally! It’s an innate capability. Another observant scientist noticed that shells and algae tended to not attach themselves to the skin, hence the development of ship hulls that reproduce sharkskin patterns.

Engineers working on the Airbus 380 are also testing a coating that imitates the sharkskin’s tiny riblets in order to streamline aerodynamics.

Mechanical inventions in development such as the Japanese Shinkansen bullet train can create problems like bothersome noise that occurs when the otherwise-quiet train, traveling at 320 kilometers per hour (200 miles per hour), emerges from tunnels.

Japanese designers designing the elongated, tapering noses of the current Shinkansen trains took a cue from the kingfisher, whose long, narrow beak has innate capabilities in reducing splashes when the bird dive for fish. Bird flight also played a role in modeling the wings and landing gear of the Airbus 380.

The plane wings imitate the upward  curl of the feathers on a steppe eagle’s wingtips, which balance the length of the eagle’s wings so that the eagle’s turning circle is not too large. In addition, the landing gear borrows from the fine feathers on a long-eared owl’s legs, which contribute to the owl’s silent nighttime flight.

While viewing examples of biomimicry, or technology imitating nature, inside a special display within our current wing of the exhibit, I’m reminded that insects, with their innate capabilities, seem to surpass us in certain types of movement such as flying, swimming, and running. I’m inspired to visit the climbing animals.

The gecko is a most versatile creature. Inside a “lizard house,” we watch geckos climb the glass walls. With their innate capabilities they move up, back, forwar, and sideways on a sheer surface in a way we would never be able to do with our hands and feet.

Thousands of hairlike extensions on the geckos’ feet create traction on the glass wall. Hundreds of spatula-like structures called setae are actually responsible for creating the gecko’s grip because the weak forces help the hairs bond with the glass surface.

The gecko toes curl as they climb, and the hairs do all the work of keeping them from falling. We watch these geckos scurry and move with agility and quickness.

The geckos’ feet have inspired scientists at MIT to design a robotic gecko called StickyBot (there are other versions developed by different universities as well). A version of Stickybot is inside the gecko house, climbing the glass.

Scientists drew inspiration from nature to create an assemblage of circuitry with feet modeled after the geckos. The robotic gecko’s feet are made of adhesive pads like those in Astroturf ™. They feature silicone hairs, which create the same force that makes the gecko stick to the walls.

The robotic gecko looks quite different from its smaller counterpart, but make no mistake—it moves with the same precision as the living gecko. The feet curl and spread on glass as well as on a variety of objects placed in the gecko house: white boards, granite, and an assortment of other smooth surfaces.

Animals have innate capabilities that echo and often even surpass what humans are capable of. Man has figured out how to use those talents by drawing on observations of animals to create new technology. Perhaps the message here could be “nature originates, man copies.”

Animals have innate capabilities that often surpass what humans are capable of. Nature originates, man copies. Click To Tweet

By observing the gecko, man learns to design robots that can potentially repair underwater pipelines, wash windows, and access hard-to-reach places. We’re struck both by the animals’ innat capabilities and by man’s inventiveness in borrowing this technology.

We’re struck both by the animals’ innate capabilities and by man’s inventiveness in borrowing this technology. Click To Tweet

“Can animals, even with their innate capabilites, eventually learn from their surroundings as well?” one of our audience members asks. “Can they invent solutions to solve problems?”

For a possible answer, we follow the arrows to the tool makers’ section.

Here are a couple of videos revealing the innate capabilities of sharks and geckos. The first one goes behind shark skin to show how it develops speed and also how it repels anything, including bacteria, from sticking to it. We have two extremes: shark skin to which nothing sticks and gecko toes that stick to shiny glass. Nature sure throws us some curve balls.

Below is a video about gecko toes, technology and Stickybot climbing smooth surfaces. At 3:50 of this video Robert Full asks a nagging question. He points out that various species of geckos have different toes with different patterns, lengths and thicknesses of hairs and they don’t understand ‘why.’

Play a round of  Take Inventory – The Interconnectivity Game based on this episode of Inventory of the Universe. Both viewing the above videos and using the tags at the end of this blog will give you dozens of ideas for The Game … it’s up to you to adapt it to the age level you’re having fun with.

This post is an excerpt from chapter 6.5 of Inventory of the Universe. Since you read all the way to here… you liked it. Please use the Social Network links to share The Explanation with your friends.

Since you read all the way to here… you liked it. Please use the Social Network links just below to share this information from The Explanation, The Innate Capabilities of Animals leave Human Swimmers in their Wake