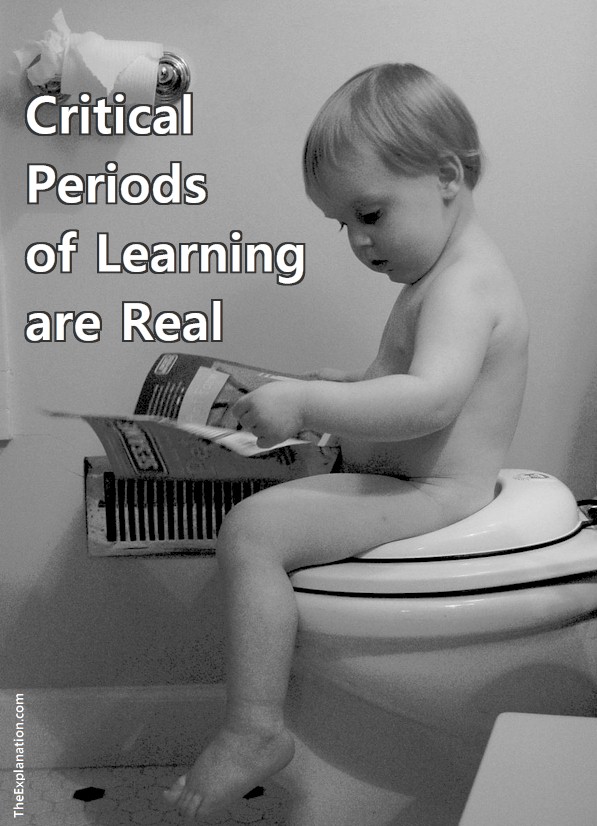 Critical periods are short windows which open and close, in children worldwide, during which the library of emotional, social and language wiring of the neurons takes place. Critical periods of learning are real. There is a specific period in a child’s life when learning certain disciplines comes easier.

We have a pediatrician in our midst who shares her research about critical periods with us. Her pediatrician and scientist colleagues are proving the principle that the brain goes through certain stages of openness.
(chapter 9.7.1)

Adults often joke that their brains are too crowded and that they don’t have enough “computer memory” to learn certain concepts easily. While we can learn through practice (or neurons firing together and wiring together), evidence proves that there are certain times of life called “critical periods.”

These are times when windows open, allowing information to soak in. They then close. Optimal learning takes place as the brain soaks up exterior stimuli.

A human baby, swaddled and cuddled, takes in love and nurturing with its mother’s milk. Imagine the contentment as the child hears reassuring words while suckling. Snuggling against its mother, the baby feels at one with her and learns to trust others.

Emotional and social “wiring” is already taking place as the baby learns to associate these positive words and feelings of being loved with feeding time in the first weeks of life. If the parent cuddles and soothes the child, responding to cries with consistency and love and warmth, the child will expect that same kind of love from family members and future mates.

This first oral period, a critical nurturing period, may be the most important period in the child’s early brain growth and development.

For a baby the first oral period, a critical nurturing period, may be the most important period in the child’s life Click To Tweet

Imagine the stages of infancy and childhood as windows of time, during which the nervous system develops. The newborn stage is an excellent example of a window of time in which new brain systems and maps develop with the help of stimulation from the environment. Critical periods are a vital part of child development.

This stimulation includes a mother’s voice, siblings’ chatter, and so on. The baby also takes in the environment by feeling, looking, hearing, smelling, and sucking, and its “library” of information is growing and being established for the rest of its life.

When these stages proceed normally, large-scale development takes place in infants’ superdense brains, which are one quarter the size of adults’ brains. Although babies’ brains are slow to respond to changes in stimuli at first, babies can process information at more rapid rates over the first few months.

Brain plasticity is off the charts during this time, with an amazing two million new synapse connections per second.

Baby brain plasticity is off the charts with an amazing two million new synapse connections per second. Click To Tweet

Peak performance is reached as infants focus their attention (thanks to the nucleus basalis) on their mother’s face, a nursery rhyme, or a ball bouncing across the floor. Key connections or bonds in the brain are strengthened. The parents are still an enormous influence here.

Think of the child’s brain changing like moldable plastic used in arts and crafts projects, finding its shape and laying down major neuronal connections. Once those connections or bonds solidify, the brain stabilizes and this critical mental period ends.

We watch videos of children in an emotional critical period lasting from ten to eighteen months. During this crucial period, the emotional command center of the frontal lobe develops in order to allow children to form family ties and friendships.

The newly developed circuits in the neocortex and limbic systems allow the children in the videos to read Mom’s facial expression and control their own emotions (anger, tantrums, and frustration). As adults, we will carry that emotional understanding and diagnose our own emotions, as well as read other people’s.

Babies, infants, and children traverse these critical chronobiological periods worldwide as their brains and bodies undergo periods of sensitization to new impulses and incitements. These are all critical periods of intense plastic development.

Take the phenomenon of language, for example. One of the unique characteristics of humans is that we can actually express ourselves. This process receives a jumpstart in childhood.

As we listen to a tape of children speaking words or adults talking to children, we learn that somewhere between birth and the age of five, children progress from reading the movements of lips in infancy to registering vocabulary and grammar, and sometime between six months and a year, spoken language prepares the baby’s brain to be multilingual.

The children learn the word “ball” as well as the order of the words “I play ball.” This is a phrase spoken by one of the children on the tape. That’s the English version. The French version is “Je joue au ballon,” and the German version is “Ich spiele Ball.” Along with the particular language spoken, children learn pronunciation, or the way that the tongue, mouth, and so on work together to produce the words and accents.

In the parent voices on tape, we hear that New Yorkers, Texans, Cajuns, Midwesterners, Londoners, and Scots all speak English in diverse and easily distinguishable accents. Not only that, nonnative English speakers have their own accents such as those of native speakers of Mexican Spanish or Russian. Children can detect these.

During critical periods for language like the one lasting from birth to three years of age, the children on our tape can actually learn two or more languages. We stop and ponder why this is so.

Why should babies be able to read lips, and why does the freshness of their minds allow them to learn two languages (such as Spanish and English or French and German) more easily?

If children are exposed to bilingual teaching (one language at home and another in the classroom, for example), they can speak both languages equally well due to the help of the environment and their teachers’ nurturing.

Let’s say a child learns and does his or her homework in French because he or she is living in France, and yet English is spoken in the home.

After the critical period, however, the children on our tape no longer learn English, German, or any other language with the same ease. We watch a time-lapse video of a young learner’s brain map as neurons dynamically integrate two languages.

We then see the window closing as the neurons are set in a more permanent pattern. We simultaneously hear the young learner speaking French with a French accent and English with an English accent. Both the visual and voice show us that babies pick up languages naturally, but with age, the learning process takes more effort.

Babies are aware of their mother’s voice in the womb, and they can recognize her sound at four days old. They remember the rocking and constant “shhhh” sounds inside the womb. Despite their large brains, however, their neuronal structure is like a sensory library waiting to be filled and their brain maps are only blueprints.

Why is this so? We think about our early years and our children’s early years, when we have a fuzzy picture of the world. We wonder why critical periods are so plastic and flexible that each new experience, such as babies hearing language, playing a game with Mommy and Daddy, or learning to recognize their faces, changes brain structure and makes a baby’s or young child’s brain sensitive.

Because of this sensitivity, babies and toddlers can pick up new sounds and words effortlessly during these first years, which are known as the “language critical period.” When a mother or father says, “Let’s play blocks” or “Show me the red block” during this period, the mere exposure to sentences, sounds, and words allows children to lock those words into their brains, which actually changes the wiring of the brain.

In essence, the library is filling up, but it is constantly open to receive new material and continuously under renovation until age five.

Interestingly, animals and birds such as newborn kittens and ducklings also have a critical period in which brain pathways rapidly form. We observe baby kittens at four weeks of age and ducklings in the first week of life. From three to eight weeks, those baby kittens will develop their vision.

The ducklings are already feeding themselves, and they will learn to fly at an age of somewhere between three and ten weeks. A four-day-old baby antelope runs through the lab. In most animals, these critical periods close forever after just a few months, and the animals have no stimulus beyond their routine to go with.

The ducklings will fly, migrate for the winter, swim, and feed on schedule, and the antelope will eat grass and migrate according to its innate brain makeup. We wonder why this is so, but let’s continue with our focus on humans.

This post is an excerpt from chapter 9.7.1 of Inventory of the Universe.

This video, a TED Talk by Patricia Kuhl, is vital to understand the critical period for learning language. As she says, this is a worldwide phenomena and as you’ll see around the 8 minute mark only works with human beings, parents rather than just audio, computers or TV.

Many questions come to mind and she asks a few of them: Why is this a worldwide phenomenon? why does it need ‘human’ participation? Are then any other critical periods of other disciplines? These are the kind of question for which The Explanation will give the answers. Join our list and stay tuned.

Since you read all the way to here… you liked it. Please use the Social Network links just below to share this information from The Explanation, Critical Periods: When Babies and Children Learn