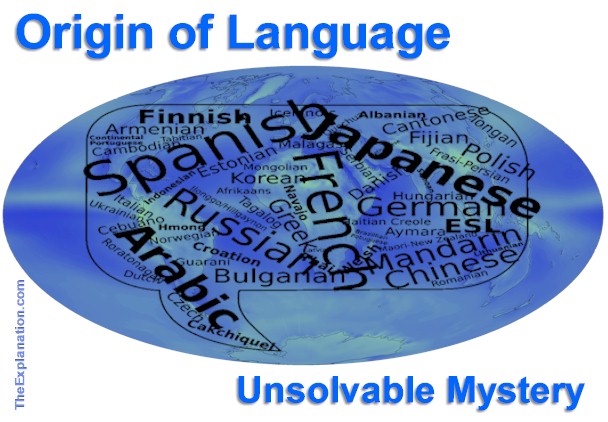 The origin of language. Philologists in total contradiction. While language is at the basis of human relations. What a conundrum.

The origin of language has so far proved to be an unsolvable problem by philologists.

The origin of language question has stumped the most learned intelligentsia for centuries. It was even forbidden to discuss this issue. Yet, language is the most common and apparent feature that differentiates humans from animals. It allows the entirety of Earth’s inhabitants to communicate with one another.
(Audit of Humankind, chapter 3.12)

The evolutionary emergence of language in the human species has been a subject of speculation for several centuries … Many argue that the origins of language probably relate closely to the origins of modern human behavior, but there is little agreement about the implications and directionality of this connection.

In 1866, the Linguistic Society of Paris banned any existing or future debates on the subject, a prohibition which remained influential across much of the western world until late in the twentieth century. Today, there are various hypotheses about how, why where language might have emerged. [origin of language] Despite this, there is scarcely more agreement today than a hundred years ago … some consider [origin of language] one of the hardest problems in science.

In this chapter of Audit of the Universe, we’re discussing how humankind socializes. We’ve followed this growth of socialization from the first procreating couple through the family, extended family, ethnic groups, clans, and patriotic nations. This has almost brought us up-to-date with human social structure. There are one or two more steps in this structure you need to be aware of to have a complete picture, globalization, and in the midst of the world scene individual verse collective rights and obligations. I shall broach those subjects.

But languages and the enigmatic origin of language is a fundamental factor in socialization. Whether it be via paper or electronic fiction and non-fiction, whether it be via 140 character cryptic messages via twitter instantly accessible in your own language via Google translate. Whether it be shared hate messages or the scientific briefs, all of it is language and writing.

Without language and writing humanity is not humanity. Even Stephen Hawking, who in his 30s, could barely be understood, used sophisticated technology to talk to us via his writings. The World learned about its Universe because a human being was able to transform the thoughts and reasoning of his mind into written words, articles, and books. A Brief History of Time was translated into 35 world languages and sold over 10 million copies to people around the globe.

Language is unique and powerful. It is the cement that binds human beings together. Yet, we know nothing about the origin of language. What a mystery.

Language is unique and powerful. It is the cement that binds human beings together. Yet, we know nothing about the origin of language. What a mystery. Click To Tweet

My intention here is not to answer that mystery. I will give you an alternative and adequate solution in Origin of the Universe. One thing everyone agrees on is, there was an origin of language.

Language and writing are another couple of pieces in the gigantic puzzle of the Universe that the Explanation is assembling. Here, I just want you to be aware of the pieces. It is impossible for me to even begin to answer these questions at this stage. I want to point out some of the incredible complexities of the contours of these pieces. There’s no way philology can come up with one theory that covers all the bases. Yet languages we have! And if we recognize coherent completeness then somewhere all these conflicting problems must intertwine in a fine-tuned solution.

This short video gives 15 ways in which human languages are different from animal communication. For instance, unlike animal communication, language can be used to communicate about anything. Any language can be learned by any other human being, probably with a huge effort, but it can be done. Language changes from generation to generation and can be enriched by new words and expressions as technology, inventions and new ideas become relevant.

Languages not only characterize clans and nations, they literally separate them one from another. Humans, naturally want to be with those people with whom the can communicate. Language is both a magnet with poles that attract similar people and repel dissimilar people. Language can be and often is a reason to create a border between countries. Language is one of the reasons our world is shaped the way it is.

In the context of developing a coherent worldview Audit of the Universe asks difficult questions that need answering. Here are some regarding language as they relate to human relationships.

Language is a fascinating subject that is one of the basics we all need to master. It goes without a doubt that our world today is more sophisticated than thousands of years ago. But, did you know that we are losing the race with regard to languages? Just as animal and plant species are endangered so are languages. We are literally losing a language every 15 days.

It’s impossible to know when humankind used language for the first time. We can, however, know when humans used writing for the first time. Hieroglyphics, Sanskrit, cuneiform tablets appear suddenly some 5500 years ago. When they do, they consist of full-blown alphabets with literary works in different locations around the globe. There are no part letters, part grammars.

Cave drawing at Lascaux, France, are estimated to be up to 20,000 years old, but there’s no sign of any writing. Above I mentioned unsolved mystery, how do we logically explain a number of unrelated languages appearing about the same in different place around the globe? Languages with comprehensible works, and hence, vocabulary, grammar, and syntax, that we can translate and read in the 21st century to know what their society was like some 5000 years ago.

Here is the surprising diversity of writing systems that we can trace back about 5500 years with artifacts of writing. This evidence of different, even unobvious ways of writing language sometimes stretches the imagination. Who could come up with such an idea? And even more so, who could garner enough initiative, teaching and people to make a writing system practical, useful to the point that it comes into existence and leaves its mark on history.

Writing can be in every direction imaginable, left to right, right to left, up and down, down and up and all combinations of the preceding. Here’s a unique system that was even used in the area of Venice, Italy. 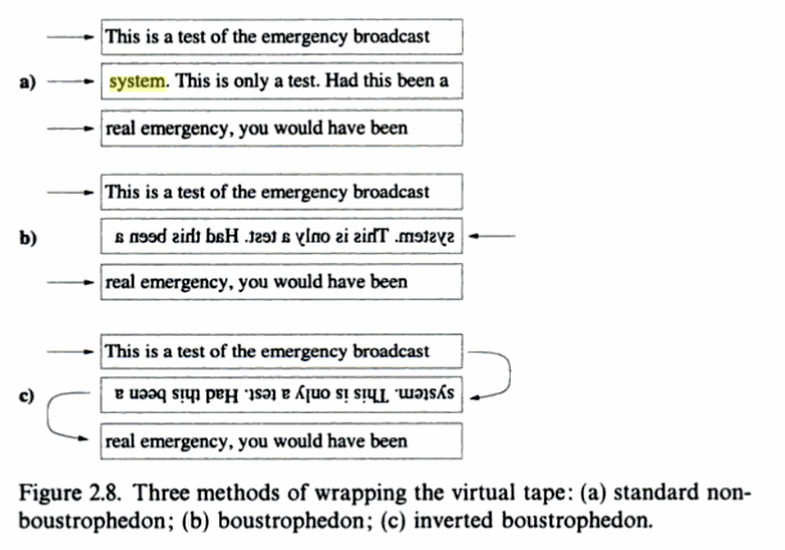 A strange writing system called Boustrophedon. It alternates the direction in which you read each line of text.

Boustrophedon, I had to stop and scratch my head when I saw this. Imagine reading letters backward or upside down. Truly amazing. But such is language and writing. Vectors of both unity and division. They have shaped human society and human relationships over the last 6000 years.

This blog post is an excerpt from chapter 3.12 of the book Audit of Humankind.

Since you read all the way to here… you liked it. Please use the Social Network links just below to share this information from The Explanation, Origin of Language, An Unsolvable Scientific Mystery