Critical Periods: When a Child’s Brain Accelerates its Development 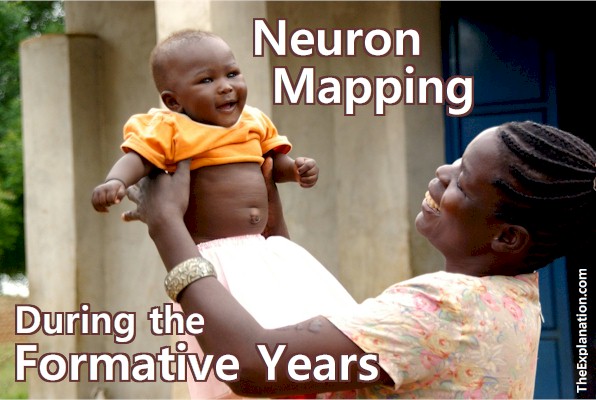 A child’s brain, when born, is a clean slate. Parents and entourage are the key to writing the basic brain map for the rest of the child’s life. It’s as if each person can have a hand in “drawing” the mapping of neurons during the formative years of a child’s life, when the child’s brain acquires knowledge and develops neuronal connections.

Let’s explore the child’s brain at twenty-six months, or around two years of age, when a child’s plastic development is at its height. Stimulation and interaction with the world complete the basic brain structure.
(chapter 9.7.2)

As we revisit those right and left hemispheres of the child’s brain, we make some interesting discoveries. The right brain connects us to people and is responsible for the musical component of speech such as the tones, nuances, tempo, and volume by which we convey everything from contentment to anger.

The right hemisphere of the brain has its critical period from birth to the second year of life. We watch infants experience emotion. The “how-to” left hemisphere is responsible for speech and linguistics, as well as problems using conscious processing.

It dominates the brain during this period. While this is occurring, children are right-brained, emotional creatures, but they cannot talk about their experiences except in simple words and phrases. This is because language is a function of the left brain.

Until about 30 months, children are right-brained, emotional creatures, but they cannot talk about their experiences. Click To Tweet

We have experienced this ourselves as children, although we may not remember. We have also seen it with our own children, but we have never thought about the invisible workings of the brain. It is something to think about, and it evokes feelings in us.

We have the idea that these infants, who are hearing speech with their larger right brain, may be more attuned to language than we are. Imagine a two-month-old baby visiting the United Nations or a major city in the world in which dozens of languages are spoken. That baby can hear the difference in sounds between Mandarin, German, French, and English.

When the baby reaches eighteen months to three years of age, the critical period of auditory cortex development, it will learn the sounds and words of its own language.

From eighteen months to three years of age, a child will learn the sounds and words of its own language. Click To Tweet

As that critical period closes, imagine that child immersed in one culture such as English, staring quizzically when its friends say, “Guten Tag” or “bonjour,” which the child can’t translate as “hello.” The child will respond to “hello,” of course, or whatever the greeting is used in its native language. Unused language neurons fade until the child’s brain map is, in a sense, “written in” with American or British English, French, German, or another language.

As the critical period closes, unused language neurons fade until the child’s brain map is, in a sense, “written in” Click To Tweet

It’s no wonder, then, that the adult brain finds immigration such a challenge. Remember our example of learning Mandarin or French for a job assignment? Imagine if you are an English-speaking individual who has been plunked down in China or Taiwan and is unable to speak the language. You struggle with the most basic greetings and words.

You can imagine someone from China or Taiwan learning English as well. Our brains are not as well equipped to learn after the critical period, having been filled with our own culture. Our neural maps need rewiring and rewriting in that case because we are learning culture, writing, sounds, gestures, and syntax while the neural networks formed in our own culture constantly assert themselves.

Our tastes in foods, family interactions, music, dance, and socialization clash with this new culture, and we’re not even conscious that we’ve acquired the taste for French cooking or flamenco music.

Children learn more rapidly from age four to age eight, when synaptic development is peaking. However, we look at teenagers (there are a few on the tour) and think that there’s something illogical about the early mass of neurons present in a child’s brain and the sharp spike in development of synapses that falls off after age eleven.

Infants have 2,500 synapses per neuron (100 billion of them) at birth, a number that jumps to 15,000 per neuron at the age of two or three. We ponder the power of the 1,000 trillion neural connections in a three-year-old child’s brain. That’s twice as many connections as our own adult brains have!

Surely our teens need more neurons in order to learn, grow, and mature. The teens on the tour are processing abstract concepts, which they can do more easily than young children, but they don’t have the neuronal capacity of their younger selves or their younger brothers and sisters.

It’s no secret that teenagers’ brains work differently, but why don’t they have the same advantage as young children, whose brains contain about 60 percent more neurons than the teens’?

Is there some sort of significance to teen brains being developed in some ways, but challenged in others, such as the circuits that control judgment, emotional control, and reasoning?

Teen brains are challenged by abstract concepts and the circuits that control judgment, emotional control, and reasoning Click To Tweet

Let’s look again at the images of a child’s brain we have been studying. They come into this world with brains like clean canvases, though there are hints of “calligraphy” knowledge from the womb. After birth, they draw a flood of letters and pictures (like those of birds, animals, their city, their country, and their language) into their “library” from the environment through feeling, looking, hearing, smelling, and tasting.

That bright, innocent, neuron-filled child’s brain keeps asking “Why?” “Why?” Each “Why” and each answer is absorbed so fast during these critical periods of neuron growth and discovery that it will make your head spin. As the babies in the home movies and the videos grow up, they progress through several critical windows.

From infant to toddler to child to adolescent, the youngsters receive encouragement, coaching, and influence from parents, family and friends. It’s as if each person can have a hand in “drawing” the mapping of neurons during the formative years of a child’s life, when the child’s brain acquires knowledge and develops neuronal connections.

In a real sense, these “maps” show the journey that these children’s future lives will take.

This post is an excerpt from chapter 9.7.2 of Inventory of the Universe.

Below is a video that reveals what happens and the importance of relationships on young children during their first three years. Their neurons are developing at the rate of 700 new ones every second! Parents and all people are a tremendous influence on secure attachment relationship in preparing a child for its future.

Did you know that neurons ‘migrate’ in a very organized way to their ultimate destination in a forming child’s brain. No other cells do this. Millions and millions of neurons forming this very compact mass, and then slowly the circuits are developed and pruned. Worth a watch.

Since you read all the way to here… you liked it. Please use the Social Network links just below to share this information from The Explanation, Critical Periods: When a Child’s Brain Accelerates its Development