Eastern Philosophy. Not a Religion, It’s a Way 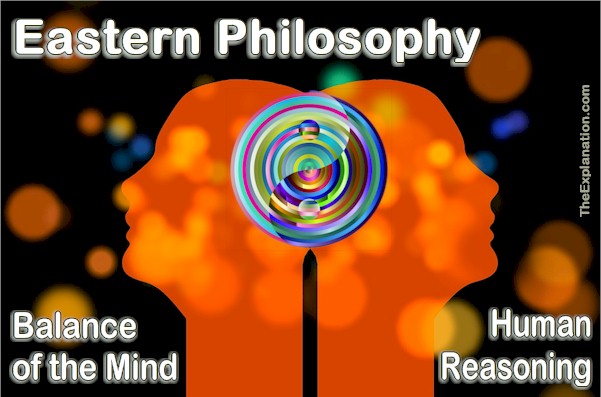 Eastern Philosophy focuses on the yin-yang balance of the human mind. Detach oneself from craving and harming.

Eastern philosophy focuses on the balance of the of the human mind. This human reasoning leads to ultimate peace.

Eastern philosophy is a quest of individuals to move along a spiritual path from awareness to being. Suffering is not the reality. Buddhism, Hinduism, Shintoism among others, are ways to alleviate this suffering through practices leading to a state of freedom from desires and distress.
(Audit of Humankind, chapter 5.6)

Eastern philosophy, whatever the source, flows along the same riverbed. The Explanation is discussing this in the context of how humans reason. The fundamentals of why humans think and act the way they do. And especially humanity’s reasoning for reaching peace and prosperity. The goal is not to explain the ins and outs, the doctrines and ways of living of these Eastern philosophies.

Rather, where do their origins stem from? What is their ultimate goal?

To be very frank with you, Eastern philosophy is not my cup of tea. Its history, ups-and-downs, traditions, concepts are hard to retrieve and I’m not an expert in this field. But we must broach this subject because it is of basic interest to The Explanation. In this final chapter of Audit of the Universe, we have to understand how the vast majority of humanity reasons.

I’m going to quote an expert, Roger-Pol Droit, extensively. He is a French contemporary philosopher with particular insight into Eastern philosophy as apprehended in the West. Here’s a translation of excerpts of an article, l’Asie, ce continent qui ne pense pas dieu. (Asia, this continent that doesn’t think god.), from December 2017 in Le Point magazine.

August 1582. The first Western missionary in China, the Italian Jesuit Matteo Ricci (1552-1610) arrives in Macao. His goal: to evangelize the Middle Kingdom. His dream: to penetrate the mandarin culture, to make them understand the Christian message, to convert them. Gifted for languages, he learns Chinese and is about to translate the Gospels. Urgent question: “How do you say “God”?”. Well, in Chinese, we do not say … There is no equivalent term for Deus of Latin-speaking Christians, no more than Theos of Greek-speaking Orthodox Christians. Stupor: no way to say “God”! Worse: the word cannot be found, because the idea itself, in this multi-millenary civilization, is neither thought about nor thinkable.

Of course, in Chinese, there is the question of “Heaven” as a cosmic power, impersonal and supra-human. It is also possible to appeal to the ancestors, to the demons, and especially to the Tao (the “Way”), conceived as a sort of absolute. But no way to talk about God. It is obvious and recognized as being absent.

Hinduism is no less perplexing than Buddhism.

The question rebounded and got more complicated, two centuries later, with the discovery of Sanskrit texts and Indian doctrines by the British, in Calcutta towards the 1780s. By first translating the Vedas and the Laws of Manu, and soon other foundations of Brahmanism, these pioneers give a new dimension to the vast questioning of Asia without God.

For India has more theological-metaphysical treasures than China, more sophisticated mystical abilities. Not to mention a kaleidoscope of divinities and legions of spiritual masters … Yet, here too, God seems to be untraceable. In any case that of the Bible and Judeo-Christian monotheism. We are looking for the equivalent in the sacred texts of Brahmanism. In vain.

The Atman-Brahman of the Upanishad, fortunately, seems to resemble what the Europeans call God. It is an Absolute. But, as soon as we read more closely, he reveals himself impersonal, material as well as spiritual, relative as well as absolute. Above all, he does not really care about the world, let alone make an alliance with humanity. It is not “our” God.

It is quite different in the doctrines of Asia. God is absent, not fought, criticized, or destroyed. In this precise sense, this continent is indeed atheist, but in the proper sense, etymological, that of the absent “a”: the idea of God does not appear anywhere.

This is an important concept when it comes to understanding Eastern philosophy. Particularly in today’s Western spiritual climate. We saw the beginning of this last week with Eckhart Tolle and his teachings that have nothing to do with God, in spite of quoting the New Testament. We in the West don’t understand that when the East invokes divinities, it has no connection with our Abrahamic based faiths. We have a tendency to amalgamate concepts that are miles apart.

This next quote from Roger-Pol Droit gets to the crux of the matter. It is the reason why I’ve classified Buddhism, Hinduism, and other Eastern teachings as spiritual philosophy and not religion.

With Buddhism, we are apparently dealing with a great religion, with all the proper attributes: founder, sacred books, monks, prayers, orders and multiple monastic rules … And its spiritual and social influence extends over almost all Asia, from India to China, from Mongolia to Ceylon, from Burma to Japan. Now we discover that it is a religion without God! Even though fervor and popular legends have sometimes deified the Buddha, he never claimed to be anyone but a human being. He did not assign his doctrine any purpose other than to put an end to human suffering.

I wouldn’t even call it doctrine in the Western sense of this word. It is teaching people how to go beyond and escape suffering. This is the key. My goal here is not to be critical or judge their practices. It is simply for us to understand the origins and goals of this spiritual philosophy clearly.

As you can see from above, Tolle’s concept calls heavily on Eastern philosophies. Whether it’s Hinduism, Confucianism, or Buddhism, even if G/gods are invoked, the personal practices have no need for a god. The end result is Nirvana or Atman Buddhahood. What is this?

This time I’m going to quote from Yogapedia.

In Buddhism, Buddhahood is considered a state of absolute enlightenment attained by a boddhisatva (awakened one). Some schools described it as the universal possession of total knowledge and wisdom.

The Buddha stated that all living beings can attain Buddhahood and encouraged his disciples to aspire to do so. He described the state of Buddhahood with four attributes: true Self, eternity, purity and happiness.

There are many opinions on how to achieve Buddhahood, depending on the Buddhist school and its teachings. However, all schools and traditions of Buddhism agree that Buddhahood involves purifying the mind of desire, aversion and ignorance. Buddhists practice meditation to free themselves from the disturbances and fluctuations of the mind and to realize their true self. There are other practices to cultivate virtue and purify the mind, such as mantra recitation, study of Buddhist sutras and many others that are similar to those taught in yogic traditions. For example, both Buddhism and yoga teach that compassion is part of the path to spiritual liberation.

No mention of God with regard to how to attain spiritual goals or even once attained. Study, purification of the mind and practicing compassion are cornerstones in this quest. Somehow, an awakened one reaches total knowledge and wisdom and realizes their true Self. Notice the capital S.

This is how the East, the majority of people on Earth today, reason philosophically to reach peace and prosperity. At least the first because, in opposition to the West, material prosperity does not preoccupy them to the extent is does the West.

Eastern philosophy has caught on in the West. The Dalai Lama and similar proponents have embedded this way of human reasoning into Western thought. How much so? Well, in some cases where Christianity and Buddhism are being encouraged together, this question is asked. Are Jesus and Buddha brothers?

“When you are a truly happy Christian, you are also a Buddhist. And vice versa.” So concludes best-selling author and Buddhist monk Thich Nhat Hanh near the end of his popular book Living Buddha, Living Christ.

You can read this article for an in-depth comparison of the two thought patterns. This is a Catholic read but provides excellent fundamental comprehension of both Eastern philosophy and Western religion. The bottom line with Asian philosophy is it revolves around the true Self. Your spiritual accomplishment is dependent upon you, yourself, and I.

This blog post is an excerpt from chapter 5.6 of the book Audit of Humankind,

Since you read all the way to here… you liked it. Please use the Social Network links just below to share this information from The Explanation, Eastern Philosophy. Not a Religion, It’s a Way