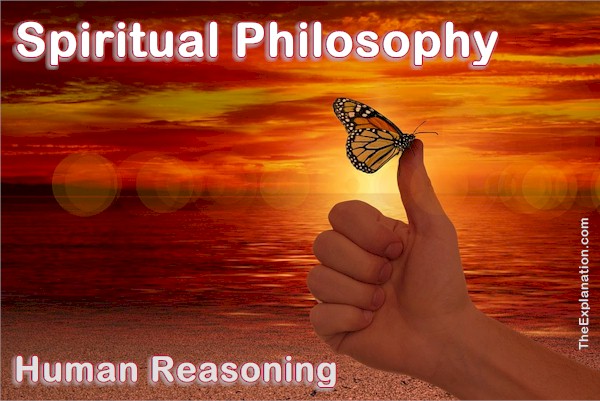 Spiritual philosophy. The love of wisdom with an additional ingredient. The human being with spiritual enlightenment.

Spiritual philosophy is human reasoning with the addition of some spiritual element.

Spiritual philosophy is the spiritually awakened human being. Someone whose wisdom has traveled into the world of inner-self. Within themselves, they’ve accessed a spiritual dimension. There’s a sort of calm bliss that carries various names like enlightenment, illumination or awareness.
(Audit of Humankind, chapter 5.5)

Spiritual philosophy is a whole new field of thinking, particularly in the West with the advent of Eastern philosophy. On the other side of the chessboard, you have secular religion. We shall be discussing that type of human reasoning when we broach religions which is the fourth way of human reasoning. What’s the difference?

On the chessboard, spiritual philosophy and secular religion meet in the middle. Depending on how people approach the spiritual and the secular there is overlap. My point is not so much to categorize the way humans reason but rather to explain the mechanism of what’s involved.

In the context of The Explanation, and Audit of the Universe, in this fourteenth and final chapter, we’re answering one overriding question. How do we bring peace and prosperity to Earth? The way humankind reasons is designed for that purpose. Even when a dictator or nation goes to war it is justified by, that’s the only way to reach peace. Are spiritual philosophy and secular religion bringing peace? That is the question.

Furthermore, from an overview perspective, we are going to establish the CORE INSTIGATOR of each of these four manners of human reasoning. With observation and philosophy, human beings are the instigators. With spiritual philosophy, there’s the notion of spirituality. What is its origin? Is it human or extra-human in the sense of some outside force?

There are a multitude of facets to spiritual philosophy. They start with books like Breathing Under Water, Spirituality and the Twelve Steps by Richard Rohr, The Book of Joy, in a Changing World by the Dalai Lama and Desmond Tutu. There are thousands of books of this nature like The Untethered Soul: The Journey Beyond Yourself by Michael A. Singer. All of which appeal to the call of the spiritual. I just give these as ideas of spiritual philosophy. I’m certainly not promoting them.

Let’s take a closer look at one such book, A New Earth Awakening your Life’s Purpose by Eckhart Tolle. Here’s a key element,

The word “I” embodies the greatest error and the deepest truth. … it is not you who speaks when you say or think “I” but some aspect of the mental construct, the egoic self (Sam, that’s the error according to Tolle). Once you awaken, you still use the word “I,” but it will come from a much deeper place within yourself. (Sam, that’s the place of truth according to Tolle).

First, the error: The mental construct, the egoic self

Quotes from The New Earth:

According to Buddha, the human mind in its normal state generates dukkha, … misery … suffering, unsatisfactoriness, or just plain misery. … thinking without awareness is the main dilemma of human existence. … thinking is only a tiny aspect of consciousness. … you won’t find absolute truth if you look for it where it cannot be found: in doctrines, ideologies, sets of rules, or stories. What do all of these have in common? They are made up of thought. Do you believe some combination of such basic sounds could ever explain who you are, or the ultimate purpose of the universe?

According to Tolle, thinking and words are inadequate, They cannot lead you to the real truth. You have to go beyond that to awareness. You need to access the part of consciousness beyond just thinking.

Second, the truth: Awakening the deeper place within you

Again, the next couple of paragraphs are made up of strung together quotes from Tolle’s book. I’ve added the emphasis.

Awakening to consciousness. Once there’s a certain degree of Presence, … they can sense the divine life essence, the one indwelling consciousness or spirit (Sam, the reason I’ve included this in spiritual philosophy) in every creature… You do not become good by trying to be good, but by finding the goodness that is already in you and allowing that goodness to emerge. … glimpses of that Truth within yourself. “a new heaven and a new earth” … is not a location but refers to the inner realm of consciousness. Wisdom, joy, love, creativity, and aliveness are concealed in the still gap between the perception and the interpretation … of thoughts.

You can only feel Being when you get out of your head. Being must be felt. It can’t be thought. There is only one absolute Truth. The Truth is inseparable from who you are. Yes, you are the Truth. The very Being that you are is Truth. Jesus tried to convey that when he said, “I am the way and the truth and the life.” Jesus speaks of the innermost I Am, the essence identity of every man and woman, every life-form. Ego arises when your sense of Beingness, of “I Am,” which is formless consciousness, gets mixed up with form.

When forms around you die or death approaches, your sense of Beingness, of I Am, is freed from its entanglement with form: Spirit is released from its imprisonment in matter. You realize your essential identity … as Presence, of Being … That’s the peace of God. The ultimate truth of who you are is not I am this or I am that, but I Am. … I don’t have a life. I am life. The deeper emotions are not really emotions at all but states of Being. They emanate from within you as the love, joy, and peace that are aspects of your true nature.

The whole goal of this post is to point out that spiritual philosophy has to do with something called Presence, Beingness, I Am that is WITHIN HUMANS that is NOT THOUGHT or WORDS. Humans have to awaken this consciousness and in doing so they can have PEACE. This comes from human effort focused on a spiritual presence that is ALREADY within all humans.

How to reach peace

All of these quotes below come from Eckhart Tolle’s bestseller which is also part of Oprah Winfrey’s Book Club.

Much more could be added, but you get the idea. Like so many of these spiritual philosophers, Tolle believes the present world is overrun with ego and invites the reader to escape to a New Earth. Reference to Christ’s words in the New Testament book of Revelation but in Tolle’s eyes, it’s your inner realm of consciousness. It’s that connection to a space before thought enters your mind.

To get to your destination all you need is Awareness, the Presence, which is the ultimate purpose of human existence. Each individual is truth and goodness, it’s inherently in each person. The mind and thought generate misery. Beingness is the presence when the spirit is released from matter. That’s when real peace happens, your identity is formless presence. At that point, you’re simply I AM, formless consciousness.

Tolle quotes a couple of spiritual masters like Jesus and mainly Buddha who was the first human to attain anatta, no-self, the absence of ego when you can sense the Beingness, the I Am in your life at all times.

the point to retain is that although reference is made to masters and practices, this attainment of Awareness, the spiritual state of I Am is reached solely by human practices. As he says, simply by being aware. The more you’re aware the closer you get to the full state of Presence. There is no God or god involved, even though H/he is referred to.

Spiritual philosophy is essentially spiritual attainment reached by human beings all by themselves. It starts with awareness of your own ego and ends with total Presence.

Christianity and religion look to God for forgiveness and strength. Spiritual philosophy, on the other hand, looks to Awareness and Presence, to the spirituality of the Beingness and I Am that is within the inner state of humans. This spirituality is ALREADY present in each human being, it’s just a matter of making humans aware of their true nature.

This is the equivalent of saying humans can bring about peace for themselves and for humanity on Earth.

This blog post is an excerpt from chapter 5.5 of the book Audit of Humankind,

Since you read all the way to here… you liked it. Please use the Social Network links just below to share this information from The Explanation, Spiritual Philosophy. Wisdom and Spirituality