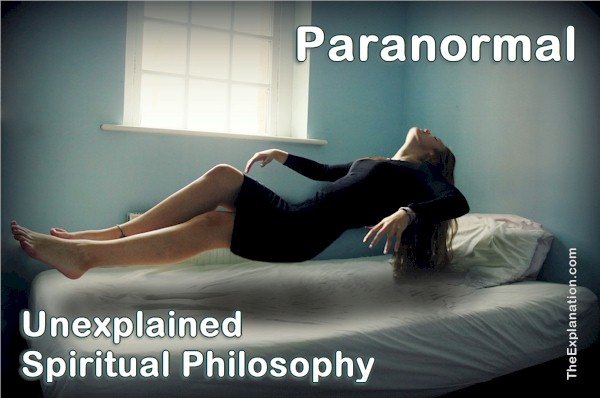 We define paranormal activity as authentic experiences that are unexplained by material scientific reasoning.

Paranormal happenings have been witnessed and recorded by millions of people. Paranormal activity is a real phenomenon that takes place in everyday life. We use it for healing, entertainment and to solve crime. It can be scary and remains scientifically unexplained.
(Audit of Humankind, chapter 5.7)

In the context of how humans reason, the subject of this chapter of Audit of the Universe, The Explanation must broach the paranormal world. Many today believe in such out-of-this-world experiences. They can’t necessarily explain it but have either witnessed it first-hand or seen or heard about it.

I’ve included it in the philosophy category of human reasoning, specifically spiritual philosophy. The reason being that Eastern philosophy believes in and practices such psychic activities. Buddha himself is associated with seemingly impossible experiences. Walking on water, going through walls and levitation like in the image above. Even Jesus Christ practiced some of these activities. We shall return to this when we discuss miracles and the power behind such phenomena in Origin of Humankind.

The ability to write without actually thinking about anything. The sub-conscious dictating, through movement of the fingers, what should be written. Drawn or composed. I knew an individual who could draw balls of string where the hundreds of strands would line up perfectly. Automatic painting can also be surrealist and is well-known with artists like Salvador Dali and Andre Breton.

Ryuho Okawa, the founder of Happy Science, is very open about his automatic writing abilities. His first such book the Laws of the Sun in 1986 holds irreplaceable value because of its ideas, says he. If the book is written sub-consciously, then you have to wonder where the ideas came from. Since then he has written over 2400 books, that’s a phenomenal rate of more than 70 books a year, well over one book per week. Others go into trances and are inhabited by spirits who do the writing. Numerous religious founders and leaders purported to have received and spread messages from the gods find their way into this category.

Kundalini is a much less heard of practice associated with a Serpent of Light. It originates in the mythical lost lands of Lemuria and Atlantis before moving on to Tibet and Peru. There are a plethora of stories of this nature coupled with real-life experiences of mystical verified but unknown powerful forces.

Here’s an extract from Kundalini, the evolutionary energy in man by Gopi Krishna.

With the awakening of Kundalini, the arrangement suffers a radical alteration affecting the entire nervous system, as a result of which other and more extensive groups of nerves are stirred to activity, leading to the transmission of an enormously enhanced supply of a more concentrated form of prank radiation into the brain drawn from a vastly increased area of the body.

The far-reaching effects of this immensely augmented flow of a new form of vital current into the cephalic cavity through the spinal cord before the system becomes fully accustomed to it may be visualized by considering the effects of a sudden increase in the flow of blood to the brain such as faintness, complete insensibility, excitement, irritability, or in extreme cases, delirium, paralysis, death.

The awakening may be gradual or sudden, varying in intensity and effect according to the development, constitution, and temperament of different individuals; but in most cases it results in a greater instability of the emotional nature and a greater liability to aberrant mental conditions in the subject, mainly owing to tainted heredity, faulty modes of conduct, or immoderation in any shape or form.

Leaving out the extreme cases, which end in madness, this generalization applies to all the categories of men in whom Kundalini is congenitally more or less active, comprising mystics, mediums, men of genius, and those of an exceptionally high intellectual or artistic development only a shade removed from genius.

In the case of those in whom the awakening occurs all at once as the result of Yoga or other spiritual practices, the sudden impact of powerful vital currents on the brain and other organs is often attended with grave risk and strange mental conditions, varying from moment to moment, exhibiting in the beginning the abnormal peculiarities of a medium, mystic, genius, and madman all rolled into one.

This occurrence is quite a harrowing one and appropriately addresses the danger involved. Kundalini is a real spiritual force that exists and cannot be underestimated. The Explanation is not giving you such examples as ideas to be followed, quite the contrary. In the context of Audit of the Universe and how human beings reason, it is essential to know what we are faced with in the pursuit of assembling a coherent, complete puzzle of how humankind will reach peace and prosperity on Earth.

Powerful forces, like Kundalini, do exist and are not to be taken lightly. In fact, The Explanation will be very clear, they are to be avoided and not tampered with.

People have had life-altering dreams. Mary Shelley, the author of Frankenstein, dreamed of the character Victor Frankenstein creating his phantasmagorical creature. Stephenie Meyer of ‘Twilight’ phenomenon came up with the idea for her wildly popular series in a dream.

In dreams that he had as a child, St. John Bosco (1815-1888) found his calling to work with poor and neglected boys. St. Francis of Assisi, Mark Twain, Marie Antoinette, Napoleon Bonaparte, and United States President Lyndon B. Johnson are familiar names and faces associated with dreams. Niels Bohr, who discovered the atom, and Elias Howe, inventor of the sewing machine, discovered scientific and technical solutions in their dreams.

We think of the atom, with which we’ve become intimately acquainted, and view a picture of Bohr’s dream: a sun (the nucleus) connected to five planets (electrons). Bohr used the structure of the solar system in sketching the nature of the atom.

We ponder this and also think of precognitive dreams, seeing the future in dreams. U.S. President Abraham Lincoln dreamt of his own assassination, Oliver Cromwell foresaw that he would rule England, and Julius Caesar’s wife Calpurnia dreamed of the fateful Ides of March. We are astonished to learn Adolf Hitler, a name we recoil from, dreamed, as a soldier in a trench, that an avalanche crushed him. Hitler saw this dream, which allowed him to wake up and escape death when the trench exploded. He misinterpreted it as a sign of his immortality.

Everyone is familiar with the twelve signs of the zodiac: Aquarius, Aries, Cancer, Capricorn, Gemini, Leo, Libra, Pisces, Sagittarius, Scorpio, Taurus and Virgo. There are other astrology traditions dating back to the Greeks, the Romans, Ancient China, India, and pre-Columbian America. The twelve lunar-month Chinese zodiac purports to predict fate and the future through the twelve signs of the Dog (Aquarius), the Pig (Pisces), the Rat (Aries), the Ox (Taurus), the Tiger (Gemini), the Rabbit (Cancer), the Dragon (Leo), (Virgo), the Horse (Libra), the Goat (Scorpio), the Monkey (Sagittarius), and the Rooster (Capricorn).

Chinese culture still marks years by the particular sign of that year in a twelve-year cycle according to the Chinese lunar calendar. Of course, the Chinese astrology system is more intricate, using the five elements (Metal, Earth, Air, Fire, Water) and the eight-trigram oracle to determine a person’s path in life.

You’ve probably noticed the obsession with astrology in our modern culture. Daily Horoscopes in the newspaper and readily available on the Internet, there are 15,900,000 search engine results for astrology signs alone on Google compared to, for instance, 11,900,000 for theoretical physics, and celebrity astrologers promote themselves freely in our culture. Magazines in France, where I live, freely talk about the zodiac signs of prominent French leaders.

The history of astrology is a long one, and astrology ranges from the intellectual learned astrology promoted by thinkers of the Middle Ages and the Renaissance to, as mentioned, the mass-printed horoscopes and free readings on the Internet.

What is the goal of astrology? Predicting the future. Divination. It is a tool for humans to try to make sense of the universe, to predict whether the harvests would be rich, to decide when to undertake a journey or whom to fall in love with, to understand your psyche, to understand people, or even to foretell such events as the birth and death of kings. Astrologers even attempt to comprehend the incomprehensible by analyzing the star charts of murderers, criminals, and dictators. It’s another example of how humankind reasons.

Freemasons. Order of the Golden Dawn. Rosicrucian Brotherhood. Theosophy founded by Helena Blavatsky, Opus Dei. The Illuminati.  All of these groups, shrouded in myth and legend and fact, claim to have special and secret knowledge carefully guarded and protected by ritual. Since the Freemasons were founded in the 15th century it has included George Washington, Benjamin Franklin, kings, statesmen, scientists, and many others as ritual-practicing members.

Paranormal activities are without bounds. The sheer number and personal experiences of common people worldwide attest to the existence and reality of such mysterious supernatural phenomena. The Explanation will explain their origin and meaning in Origin of Humankind. It would be amiss to end this blog post without a strong recommendation to not get involved with such spiritual forces. They are potent and in whatever format or circumstances can be hurtful to both physical and mental health.

This blog post is an excerpt from chapter 5.7 of the book Audit of Humankind.

Since you read all the way to here… you liked it. Please use the Social Network links just below to share this information from The Explanation, Paranormal. Real Activity Beyond Physical Explanation