Endangered Species of Animals have Humans Focused on Fauna 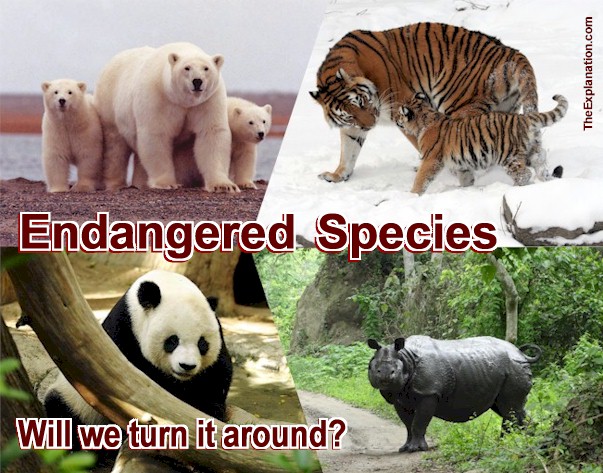 Endangered species of animals hold a special place in human hearts. We love animals, but never before have we been in danger of losing so many species.

Endangered species. Humanity has managed to put numerous animal species in jeopardy of survival. Can we turn it around and bring animal biodiversity back to life.

Endangered species of animals has caused humanity to take a step back and look at what we’re doing with the animal population. One aspect of considering something a possession is giving oneself permission to damage or break it. Animal testing runs the gamut from psychological torture to actual vivisection to intentionally giving an animal cancer. In some cases, this treatment is arguably a necessary step in improving human quality and quantity of life—as in testing drugs and medical procedures on animals before approving them for human trials. In others, cruelty is part of manufacturing a luxury like snack food or cosmetics.
(Audit of the Universe, chapter 6.2)

But not everybody supports this kind of treatment for animals. PETA (People for the Ethical Treatment of Animals), the Animal Welfare Enforcement Agency in Britain, and China’s Voice4Animals are just three organizations – with a total membership exceeding one million—that organize protests and pursue legal channels to reduce and eliminate needless animal cruelty. Three examples of the successful influence of such organizations are the cases of ivory, whaling, and fur.

Perhaps the most fortunate of animals are those for whom we have developed real affection. Man views our pets as, if not our children, favored younger siblings for which we feel both love and responsibility. These animals include both those we keep as pets and those we have decided to protect because of their beauty, exoticness, or rarity.

Pets are often cared for as if they were children: and Americans alone spend a total of $61.4 billion on their pets annually. Different countries and regions consider different animals appropriate for keeping as pets. In China, cats are in luck, while Americans prefer dogs. Japanese keep birds and crickets as pets. Inuit Eskimos of Canada might care for a fox, seal, or even bear cub. We don’t always regard working animals like oxen and horses with the same affection as pets, but we usually treat them nearly as well because we rely on them to help accomplish our work.

Another class of animals we care for in a way are those who have adapted to live in the human sphere. We don’t view them as possessions per se, but we created and own the environment to which they have adapted. Animals like rats and pigeons thrive in human cities, and some animals, including raccoons, opossums, monkeys, and coyotes have adapted to urban environments even in the past several decades. This relationship works out to their advantage, even if we aren’t willing partners in the exchange.

Exotic animals, when we’re not hunting them, sometimes land in this category as well. In most cases, this is after the animal has reached the brink of extinction after being over-fished, over-hunted after we’ve destroyed their environment through our own industry and expansion. Once an exotic animal’s endangerment reaches public attention, international and grassroots movements sometimes champion their cause.

Humans don’t always make the right decisions, but as you can see, they can come around to aid those animals who need help. Case in point, the first-ever birth at the Beauval Zoo South West of Paris of a baby Panda in August 2017, who was officially named ‘Yuan Meng,’ meaning “the realization of a wish” by Brigitte Macron, wife of the French President in December. It is a joint venture between France and China to revive the Panda population, another endangered species, and is the result of real efforts towards that goal

We have not always been the top predator in the global environment, and even in modern times, animals kill several hundred people each year. When not attacking us directly, predators can harm or kill the animals we have chosen to protect. These factors have led us to view some animals as enemies to be destroyed, rather than possessions to exploit or friends in our care.

For centuries, this relationship was like a well-matched boxing bout. Two opponents—the tiger on one side and us on the other, for example—stalked and hunted one another that, if not fair, wasn’t one-sided. Since the industrial revolution, this conflict has grown more and more to resemble a fight between a schoolyard bully and his skinny victim. Our tools of hunting and war have driven many top predators to extinction, and the survivors into a few remaining pockets of deep wilderness.

We don’t view vermin and pests as the threats that predators are, but humans hunt and kill them with the same efficiency. Eliminating rodents, insects, and similar creatures is an 11-billion-dollar industry in the US alone. Even before the process became industrialized, individual people have made a living trapping rats since we started living in cities. Since these vermin are often disease vectors, trapping and killing them is likely a necessary cost of what some might consider the advantages of urbanizing humanity.

Bacteria is another form of fauna humans have viewed as a threat since we discovered them in the 19th century. We have acted to counter this threat with antibiotics, antiseptics, and vaccines. This campaign has improved our lifespans and quality of life. Still, it has also forced bacteria to reorganize and evolve, creating super-resistant bacteria that are immune to many of our antibiotics. Cases like this are essential studies in our Audit of the Universe, since unintended consequences play a significant role in our effect on the Universe.

This blog post is an excerpt from chapter 6.2 of Audit of the Universe.

Since you read all the way to here… you liked it. Please use the Social Network links just below to share this information from The Explanation, Endangered Species of Animals have Humans Focused on Fauna